A Dangerous Method in Cronenberg's madness

"Freud accepted the reality of the human body—he was talking about penises and vaginas and anuses and incest when those things were not discussed." 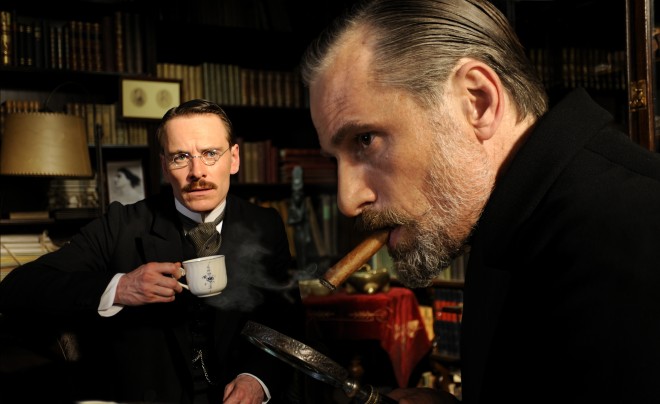 Michael Fassbender (left) as Jung and Viggo Mortensen as Freud

Any film by David Cronenberg is an event. One that usually takes you by surprise When I saw A Dangerous Method amid a welter of pre-screenings for TIFF, I was shocked. . . shocked that I wasn’t shocked by a Cronenberg film. From the opening frames, a classic period sequence of a -carriage hurtling down a country road, I felt we on a strangely un-alien planet for this filmmaker. Then as the narrative unfolded with the elegant cadence of a Viennese waltz, I realized we were in a genre, but not one that Cronenberg had tried before: the period biopic. Though “biopic” seems not quite right; it’smore like a bi-biopic, a portrait of the galvanic relationship between Carl Jung (Michael Fassbender) and Sigmund Freud (Viggo Mortensen).

The film triangulates the birth of psychoanalysis via their intersection with a fierce Russian named Sabina Spielrein (Keira Knightley), a volatile patient of Jung’s who who seduces both of them as she herself graduates from paranoid case study to headstrong psychoanalyst.  The film is based on a play, which is based on a book—The Talking Cure by screenwriter  Christopher Hampton (best known for another dangerous title, Dangerous Liasons). And much of the script is  lifted directly from Speilrein’s writings, which lends the dialogue an unusually literate, essayish intelligence. This is disconcerting from a filmmaker who has specialized in serving up flesh, with sashimi acuity, as a metaphor for the unconscious—rather than engaging in intellectual discourse about the id, the ego, and the cold war between death and sex in the human psyche.

When I saw A Dangerous Method, I found much of it seductive, fascinating, and often funny (Viggo’s droll, cigar-savouring Freud is priceless). But I wasn’t sure the drama worked. Despite fine performance all around, the dialogue sometimes felt more written than spoken,  and I wasn’t blown away—something I’ve come to expect from Cronenberg. I walked out of his previous two movies physically electrified.

But now, over four months later I’m dying to see A Dangerous Method again. Films, like wine, tend to ripen in the unconscious, or evaporate. This one is still beckoning with disarming power. Besides, I’ve always felt a need to see Cronenberg’s films twice. On a second viewing, they inevitably get richer. In the case of the more bizarre films such as Naked Lunch, Crash, and eXistenZ, that’s partly because you don’t know what to think when you walk out. The WTF effect. But even the more mainstream work, such as A History of Violence and Eastern Promises, deepen on second viewing. As if Cronenberg is shooting in his own version of 3D, creating a stereoscopic view of ego and id that requires several passes of perception. Then again, his films often deal with dualism, most literally in Dead Ringers. And his first feature, after all, was called Stereo. 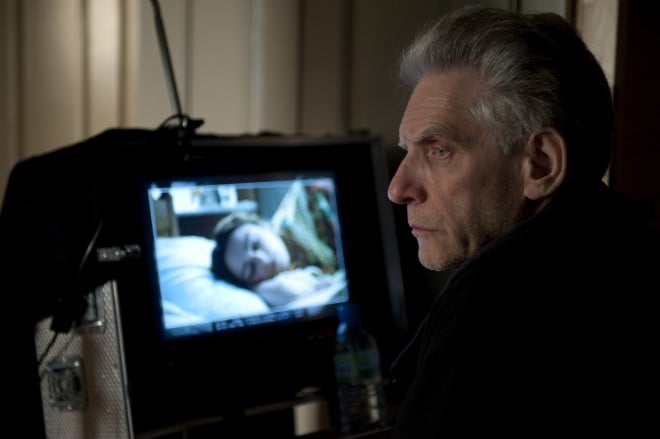 So rather than puzzling out a review, let me offer up an interview that I conducted during TIFF with Cronenberg—one of those rare artists with a lucid and uninhibited knack for psychoanalyzing his artistic intentions:

Q. When you were coming of age intellectually in the 60s, people adopted thinkers like Marx, Freud and Jung the way they adopted rock bands. As founding fathers, Freud and Jung are like the Beatles and Stones of psychoanalysis.  Which were you a bigger fan of?

A. Jung was very popular in the ’60s. I was definitely a Freud fan. What happened with Jung . . . I have his red book on piano, his book of his drawings and paintings, his religious visions basically. It was suppressed by his family until last year.  It’s a beautiful book. It shows Jung was that thing he most didn’t want to be called, which was an artist. And Freud as well.

They thought they wouldn’t be taken seriously as scientists and medical professionals if they were called philosophers and artists. But Jung, I think, became a religious leader. His father was a pastor, and he had six uncles who were pastors, and though he derided them at the time I think that’s what he really wanted to do. He wanted to heal people spiritually. Once you see that’s what you want to do, you’re a religious leader. You’re no longer a medical professional.  That’s not to say Jungian analysis can’t work for people because it obviously does . . . On the other hand, Jung did say that Freudian psychoanalysis worked only on Jews.

Q. Some people may say the most shocking thing about A Dangerous Method is that it’s not shocking.

A. That’s their problem. Really. If somebody says that, I think they really don’t understand me. I don’t think about my other films when I’m making a movie. I give the movie want it wants. This movie, because the dialogue is taken from letters that were written and is very accurate, it’s a process of resurrection for me.  I really want to bring these people back to life in a very neutral, accurate  way. For me to impose stuff on it just so people can recognize it as Cronenberg-esque or whatever, it never occurs to me. I really want to explore what the movie is.

Q. So it’s Cronenberg-esque. I always thought it was ‘Cronenbergian’

A. I’ve been pumping for Cronenbergundian and I’ve actually seen that in the press lately, so maybe it’s taking root.

Q. How did the project originate?

It was a script first. We had the play and Christopher and I had our own ideas. So there are elements of all of that in it. But the shape of it was determined by both of us. It was a script that was 94 pages and I cut it to 80 pages. He was shocked at first, but then he said, ” I think what you’ve done is great,” which surprised him. The most brilliant thing he did was to distill this incredible cast of characters surrounding Freud and Jung in the psychoanalytic movement , which is beyond the five characters we have. Incredibly eccentric, wonderful characters. He could see the way clear to make a dramatic structure that you could handle yet deliver an accurate portrayal of the relationships among these people, and dialogue that was very accurate. They said all these things in their letters. It was a letter-writing era.

Q. Tell me about casting Fassbender as Jung and and Viggo as Freud.

A. You can see the old Jung on YouTube doing interviews, a very sweet, charming, lovely guy, but grandfatherly. Same thing with the old, emaciated, cancer-ridden Freud with the white beard. These were not them. This was a 29-year-old Jung who was considered to be handsome, charming, dynamic, gregarious,  a little dangerous. And Freud was, at 50, described by Stephan Svag in his book The World of Yesterday as masculine, handsome, charismatic, seductive and witty. And funny. That’s not the classic view of Freud, but it was the real Freud, coming from people who knew him. To me, that required some oblique casting, to get to something like that. When we finally thought of Viggo, of course I loved the idea of working with Viggo again, but you don’t do an actor a favour by miscasting him. If I hadn’t thought he would be great I wouldn’t have cast him.

Q. You originally cast Christoph Waltz, who went off to make a studio film, no?

A. Christoph Waltz pursued the role, met me, told me that his grandfather had been a pupil of Freud. He’s Viennese, you know. And he convinced me he would make a good Freud. In retrospect sometimes these things work out for the best.

Q. Viggo’s Freud is quite a wit.

That’s the element of Freud that people don’t know. The photos of him are very serious. But in his letters you can see he’s got an incredible wit, and he’s quite capable of directing it against himself. People don’t read Freud, so they don’t get him. A lot of it is very funny. In his letters, where he can let loose more than in his lectures, he’s extremely funny.

Q. How did making the film change your notions of Freud and Jung?

A. When I was growing up you inhaled Freud with the atmosphere. Everybody thought they knew Freud and understood the id and ego and superego. Everybody took that as reality and accepted it. But it was cathartic to dive into the primordial ooze with them. When I read Christopher’s script I thought in retrospect I’ve always wanted to do something on Freud.

Freud really accepted the reality of the human body. He was talking about penises and vaginas and anuses when those things were not discussed. He was talking about child abuse and incest and so on. That was a very repressive, Victorian era. You did not talk about that stuff. Freud was insisting on the primacy of the body, and I think Jung ultimately wanted to flee the body by talking about spirituality and the collective unconscious and all of that. So if you think of it in those terms it fits in my canon beautifully. No that I was consciously meaning it. But I can analyze it and see that.

Q. You cast this young Toronto actress Sarah Gadon as Jung’s wife, and she co-stars with Robert Pattinson in your next film, Cosmopolis.

A. I feel like I’ve discovered her. She’s beautiful, she’s smart and she’s funny. And she’s really a great actress. She’s terrific. In Dangerous Method she found a tone that was wonderful, and accurate.

Q. What surprised you most about Viggo’s performance and Fassbender’s?

They were all doing accents. For Viggo just the way that he embodied Freud. He somehow managed to do the same received English accent as Michael, but made it feel Viennese-Jewish without doing any schtick, without doing any Yiddish stuff. They would have spoken High German to each other, so they wouldn’t have had a Viennese accent or a Swiss German accent when they were together. But somehow Viggo embodied that and made it different from Michael’s Swiss German version of English. The German language was hugely important for the development of psychoanalysis, and yet we were doing the movie in English, so how do you deliver something of that, the formality and the elegance but also the difference between these two men? Somehow they managed to do that without being obvious.