How did the bold, slow, near-silent 'Ghost Story' get made in Hollywood?

David Lowery's 'Ghost Story' goes so boldly against the Hollywood grain, it's incredible that it was made at all 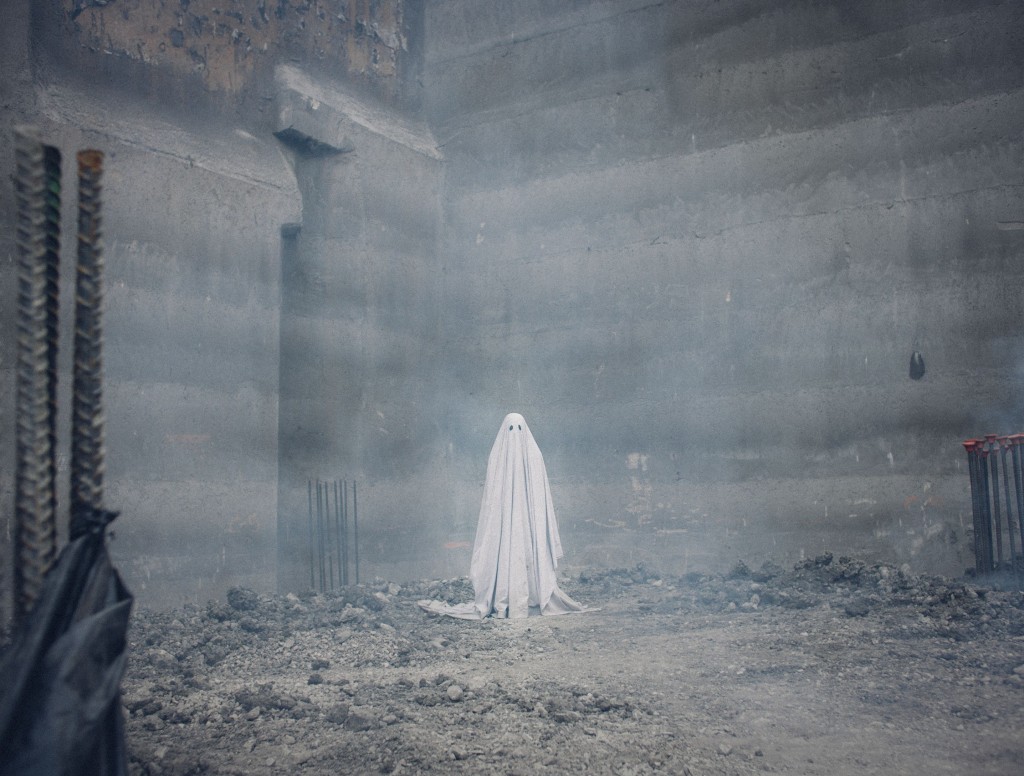 Casey Affleck as C. in “A Ghost Story” / Photo by Bret Curry, courtesy of A24

For a column dedicated to one movie per month that does something we’ve never seen before, I’ve had to settle for films that break new ground in some fashion or other but are, on the whole, fairly conventional. And I couldn’t imagine any of them making my annual top 10 list. But with July’s pick for Movies That Matter, we’ve hit the jackpot. A Ghost Story is profoundly original on just about every level, and casts such an astonishing spell, I can’t imagine it not making my top 10, no matter what movies come and go before the end of the year. (Not to overlook this week’s massive opening of Dunkirk, already being hailed as the movie of the year. But I’d hate to see A Ghost Story get lost its shadow.)

Written and directed by David Lowery (Pete’s Dragon), A Ghost Story is a micro-budget indie film endowed with a pair of A-list leads—recent Oscar winner Casey Affleck (Manchester By The Sea) and two-time Oscar-nominee Rooney Mara (Carol, The Girl With the Dragon Tattoo). They play an unnamed couple living a faded ranch house in a Texas suburb. Early in the story, Affleck’s character is killed in a car accident at the end of their driveway. His wife visits him in the morgue, then, after she’s gone, the camera remains fixed on the unattended body, which lies on a gurney under a sheet. Time passes. The body sits up, and slowly walks away, cloaked in the sheet that will serve as Affleck’s costume for most of the film.

To drape a movie star in a bed-sheet and present him as a ghost is nervy, to say the least. And this is a somber drama, not a work of comedy or schlock horror, so that thin white sheet has to suspend a mountain of disbelief. Which it does, effortlessly. As the sad phantom drifts through his former life, looking for solace, Affleck is left with just one mode of expression—body language. It’s a long sheet, flowing into a train that drags across the floor, lending the ghost an awkward dignity. There are oval eyeholes, but no eyes—only dark hollows, conjuring untold depths of loss and longing. We don’t just believe in this ghost; we come to know him, and read his pain through his cautious gait, the way he shuffles through a room, or just stands there watching, a lonely sentinel observing a world in which he has ceased to exist. He’s pure POV, a silent witness to every scene.

The sheet, however, may not be the film’s most audacious touch. In fact, as a powerful icon that echoes everything from Casper the Friendly Ghost to a slashing Michael Myers in Halloween, it may be the movie’s most commercial hook—after all, the poster portrays the sheet, not the stars. What’s most daring is the ultra-slow tempo of Lowery’s direction, with its static compositions and extremely long, uncut shots. Defying the grammar of Hollywood filmmaking, which is built on stimulating the viewer with constant camera movement and fast-cut action, Lowery has created a cinematic sanctuary, a realm where life moves at a softer pace than it’s supposed to in movies, or even in the world outside. He creates tension by enfolding us in a hushed intimacy, a kind of secret space. Most memorable is a luxuriously prolonged shot of Affleck and Mara nestled in bed, a frame so dimly lit that the longer we gaze into its pearl-grey shadows the more transparent it becomes, as if a spectral mist is passing through their bodies. 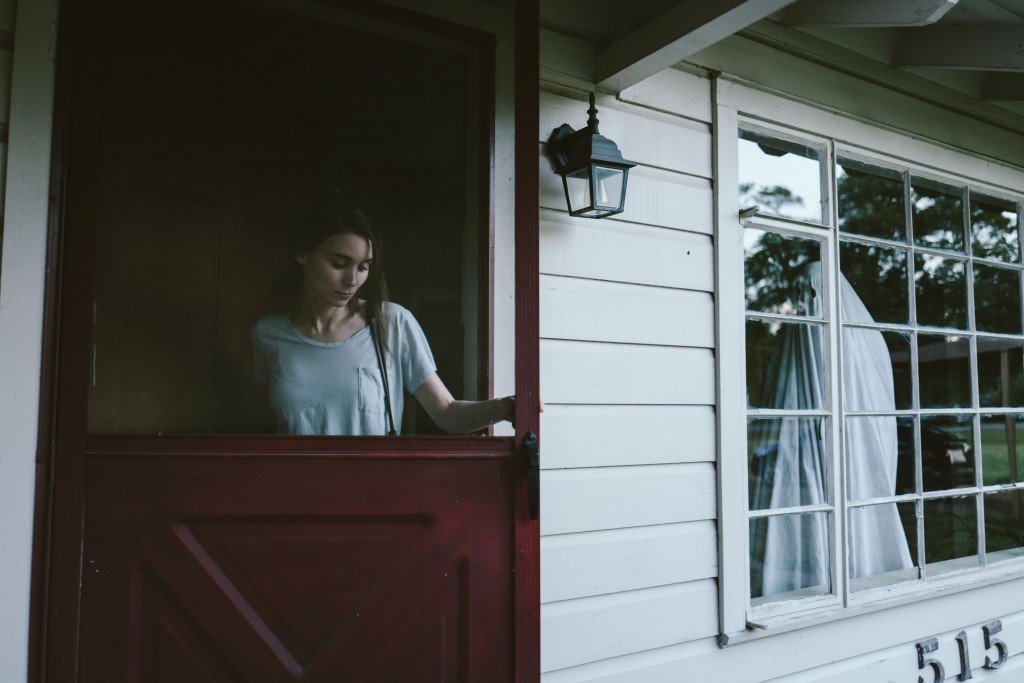 Rooney Mara in “A Ghost Story” / Photo by Bret Curry, courtesy of A24

The use of patient, contemplative takes within a fixed frame is not original. Lowery, 36, has been deeply influenced by certain Asian and European filmmakers who treat the screen as a place to get lost in, rather than be assaulted by. “I find great solace in films that allow me that space just to exist,” the director told me in a recent phone interview, “whether it’s to contemplate something or to let my mind wander.” When asked to name his influences, Lowery rhymes off a global pantheon of arthouse auteurs, including Thailand’s Apichatpong Weerasethakul (Cemetery of Splendour), Malaysia’s Tsai Ming-liang (What Time Is It There?), Sweden’s Hilary Brougher (Innocence), Mexico’s Carlos Reygadas (Light After Darkness) and France’s Chantal Akerman (Jeanne Dielman, 23 Quai du Commerce, 1080 Bruxelles). Closer to home, he says, both Terrence Malick (Tree of Life) and Wim Wenders (Wings of Desire) were “a strong influence.”

Aside from the static visuals and languid tempo, other elements of the film’s bold minimalism include a narrative that slips back and forth in time almost imperceptibly, and dialogue that goes dead for long stretches. Needless to say, once Affleck is wearing the sheet, he is mute. And Mara is just slightly less of a silent observer than he is. Perhaps her most powerful scene shows her in the aftershock of her husband’s death, slumped on the kitchen floor, with a chocolate pie in her lap. (I know it’s chocolate only because the press kit told me.) The pie has been dropped off by a real estate agent, and Mara devours the whole thing in one sitting. You can’t fake eating—well, you can with the magic of editing, which allows an actor to discharge mouthfuls of food into a spit bucket between takes—but there is just one cut in the four-minute take of Mara going at the pie. Mara is actually eating that pie, with agonizing desperation.

That’s about as close as A Ghost Story gets to an extended action scene. Not that there aren’t a number of violent shocks over the course of the film, and even a horror trope or two. But they pop out of the narrative fabric like stabs of lightning, unannounced, without the usual overture of suspense, and vanish just as quickly. It’s as if A Ghost Story lives in the shadow world of a conventional haunted house movie—the ghost of a ghost story. And there are generous silences. (Popcorn munchers beware: you might be the loudest thing in the theatre.)

What else haven’t we seen before in this movie? The framing, for one thing. Lowery hasn’t just forsaken the wide screen for an almost-square 1:33 aspect ratio (used by Gus Van Sant in Elephant), but he’s rounded the corners in the vignette style of old snapshot. Without the widescreen, he explains in the press notes, “the images tower over you. They also confine and restrict the characters.” The rounded corners, he adds, “help de-emphasize the rectangular, softening the claustrophobia and containment of the main character, who is trapped for the entire movie.”

Then there’s the unusual distribution of the script. Typically, a filmmaker will give his big star the juiciest chunks of dialogue, so he or she can act. Not here. While Affleck and Mara have a few pages between them, the vast majority of lines are packed into a single speech from a guy who is not even a character in the story. Portrayed by Will Oldham, he’s an annoying philosopher holding court at a kitchen table, beer in hand, surrounded by hipsters at a party in the ghost’s former home, who unleashes a cosmic rant about the pointlessness of life and art in a world where everything must die.

“That scene is a road sign for the audience,” explains Lowery, “a sign with a big arrow on it, pointing not towards a solution, but in the direction the movie is about to turn towards. It represents an existential crisis that I was undergoing when I was writing the film and I’m sure is not unique to me. I don’t think that this character arrives at a conclusion that I agree with, but there’s a pursuit of truth inherent to his rather obnoxious prognostication.”

But by making the prognosticator so annoying, Lowery has slyly distanced himself, and the film, from any intellectual agenda. Its native language is mood. “The actual making of it was so intuitive,” says the director, noting that the ending changed as they were shooting the film. Even the opening lines of the movie were an accident—Affleck and Mara are lying on the sofa watching TV when she says, “I’m scared,” and he says, “Don’t be scared.” In fact, the actors were just fooling around, waiting for their director to call “Action,” unaware the camera was already rolling, says Lowery. “It was the two of them enjoying each others’ company while facetiously pretending to be afraid what direction the scene might go in.” 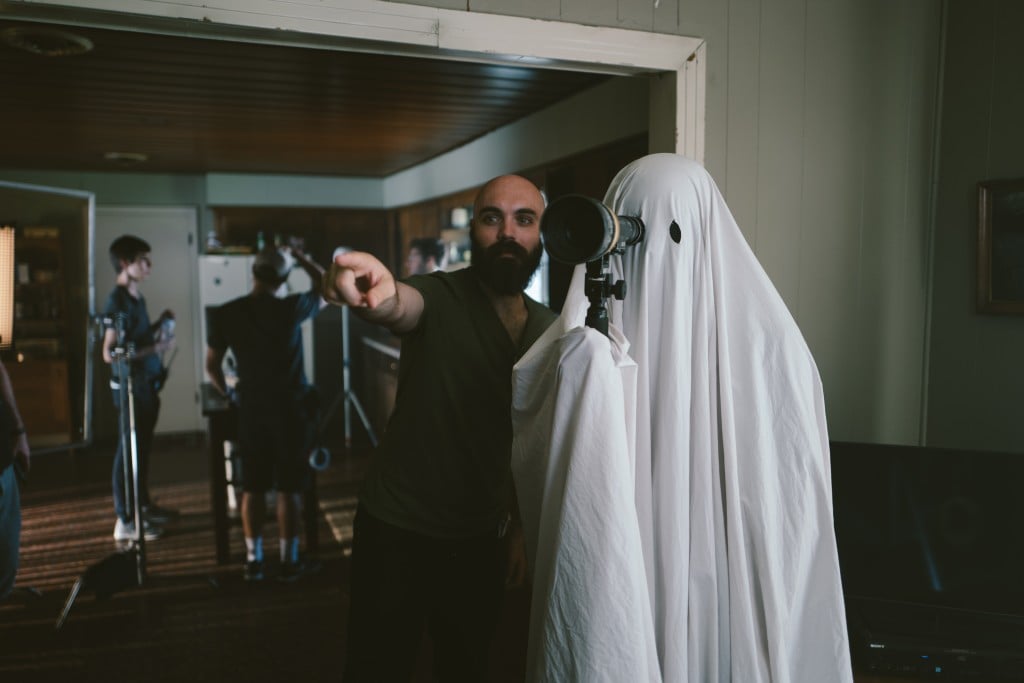 David Lowery with Casey Affleck on the set of “A Ghost Story” / Photo by Bret Curry, courtesy of A24

In the end, one of the most amazing things about A Ghost Story is that it got made at all. It stands out as such a wild exception to contemporary movie culture that you have to wonder how Lowery got away with it. His answer: “The key to making a movie like that is to do it yourself, and if you’re able to, pay for it yourself.” He and producer Toby Halbrooks, his co-writer on Pete’s Dragon, used the money they made on that Disney production to finance A Ghost Story. Their budget, he says, was under $200,000; Pete’s Dragon cost $65 million. Lowery had cast Affleck and Mara in his 2013 feature Ain’t Them Saints, and they were happy to rekindle their chemistry for a song.

Once the film was almost finished, and headed to Sundance, finding distribution was “remarkably easy,” says Lowery. “I think the movie has—without sounding too crassly commercial—a unique sale-ability to it. It had these two actors who have some commercial value, at least to a certain swath of audience members. Then it had the image of this ghost, which A-24 [the U.S. distributor] saw a lot of potential in.”

Lowery says he made the film because he was “looking for comfort in a world in that was seeming increasingly comfortless.” And for a tale of loss and mourning, A Ghost Story is, oddly enough, not a downer. Its ethereal world cloaks us in its own cozy shroud, an enveloping sense of connection to something lost.

It’s a rare filmmaker who can pivot from studio blockbuster to indie experiment. So for his next pivot, would Lowery consider directing a Marvel blockbuster? “I grew up reading Marvel comic books and it’s a joy to see the aesthetic replicated on screen so thoroughly,” he allows. “Yet the aesthetic is so well-grounded at this point I don’t think there’s anything I could contribute to it. So the answer is likely no. But I do love superheroes, so there might be the right superhero movie out there I may want to delve in.”

Maybe one who wears only a sheet?

Lowery laughs. “This character is eminently franchise-able! This is the origin story for a bold new superhero!” Just kidding, of course. Though stranger things have happened.