A Scientology movie only Louis Theroux could make 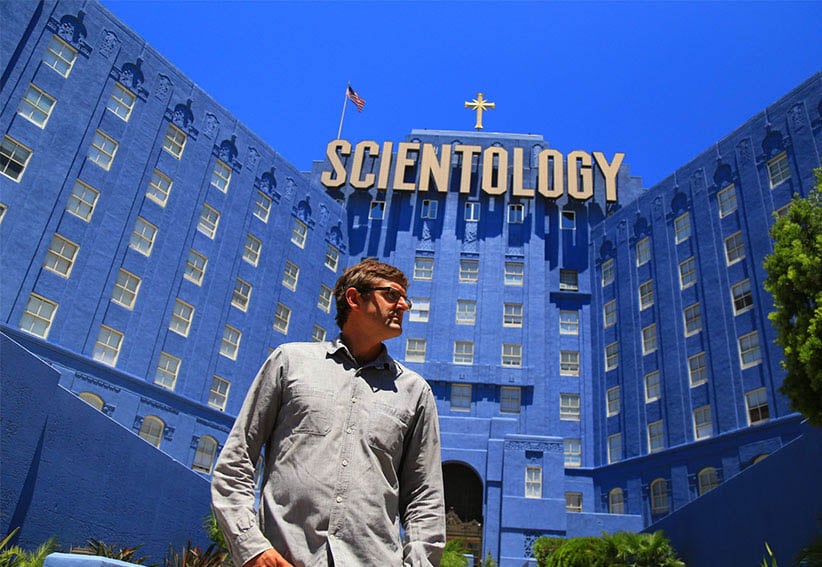 Louis Theroux stands outside The Church of Scientology building in Los Angeles. (HotDocs)

There’s a shot that pops up again and again in attempts to document the Church of Scientology: two people holding cameras, filming each other, caught in a reconnaissance stalemate. It’s a cinematographic mise en abyme. The surveillance and counter-surveillance recurs in an infinite loop, feeding a sinister sense of paranoia. It’s in countless YouTube videos. It’s in news coverage of the infamous cult/Church/Hollywood pyramid scheme. And it’s there, repeatedly, in My Scientology Movie, the latest documentary starring British broadcaster Louis Theroux, which makes its Canadian bow at the Hot Docs film festival in Toronto this month.

“What’s that thing in movies when nobody wants to put their gun down?” Theroux asks, over the phone from London. “A Mexican standoff! It’s like a Mexican standoff with cameras. When someone’s being rude and hostile, there’s a natural tendency to want to be rude and hostile back. I wanted to short-circuit that adversarial relationship.”

The reliable control amid the ever-changing oddball landscapes is Theroux himself. As both a journalist and an on-screen presence, he’s affable, able to bear down on serious material while maintaining what he calls a “slightly tongue-in-cheek, antic mood.” He gives off an almost childlike inquisitiveness, a neat tactic that allows him to cozy up to the most unapproachable subjects. Theroux speaks to people first and foremost as people, not as kooks or ideologues.

Theroux helped popularize for television a hip journalistic immersion that’s now de rigeur. (See the “hey check this out!” reporting that built modern media empire VICE.) What distinguishes Theroux’s docs is that he doesn’t just want to show off these rookeries of weirdos. He wants to understand them. In his 2008 special, Louis Behind Bars, he describes California’s notorious San Quentin prison as a “world-within-a-world.” This is what his docs are about: microcosms of life and thought that reveal something of the way we all live and think and believe.

Fringe religions and cults are perfect models of this worlds-within-worlds idea. They have their own rules, rituals, and complex systems of belief that give meaning to their adherents, however ludicrous or pernicious the may seem the rest of the outside world. With My Scientology Movie, Theroux has found his perfect subject. “It’s another story of extreme religious commitment, and people finding meaning by embracing a kind of ultra-religious conviction,” he says. Of course, the Church isn’t exactly famous for being friendly to journalists, however affable they may be. “There was never the prospect of meaningful access,” says Theroux. “So the problem became, ‘How do we tell this story?’ ” In this sense, My Scientology Movie recalls one of Theroux’s best docs. In a 2003 BBC special, he set out to make a film about Michael Jackson, only to find himself hamstrung and hard-up for access. Instead, he made a film about the difficulty of understanding rarefied stars such as Michael Jackson, spending time with Jackson’s father, and alleged “personal magician,” a man who calls himself “Majestik Magnificent.”

In this film Theroux relies on Mark “Marty” Rathbun*,  who went from top enforcer to high-profile whistleblower; he and director John Dower also enlist young actors to play top-ranking Scientologists, such as Church chairman David Miscavige and prominent Hollywood prophet Tom Cruise. My Scientology Movie is filled with claustrophobic confrontations: between Theroux and Rathburn, Rathburn and Scientologists mobilized to harass him, Theroux and the Scientologists filming him, and countless unnamed camera people looming on the periphery.

It’s here that Theroux and Dowler make their strongest stance. Their doc understands that a lot of responses to the Church have also embraced tactics of confrontation and hostility. And in the ultimate coda, Theroux claims the Church is producing its own counter-movie—about Theroux himself.

* Correction: A previous version of this post misspelled the name of Mark “Marty” Rathbun. Maclean’s regrets the error.