After last year's fiasco, the 2018 Oscars were a return to boring, trite form 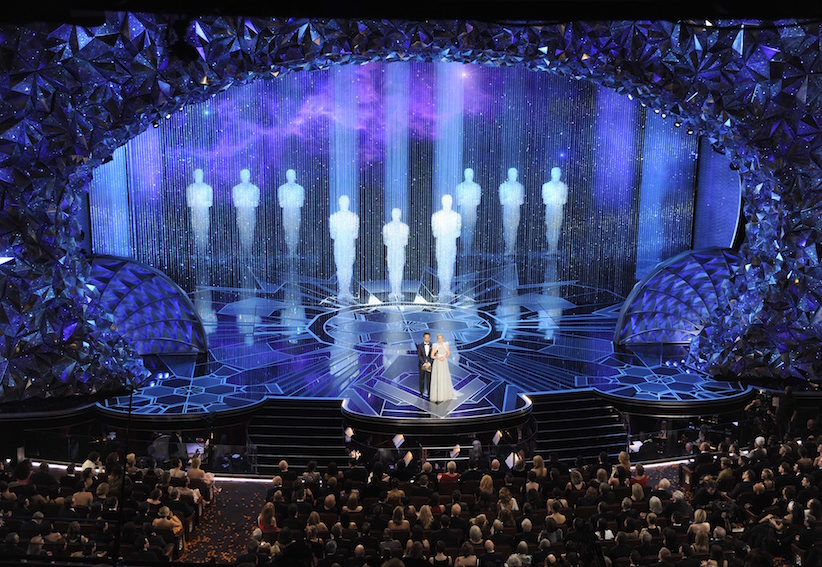 Lin-Manuel Miranda, left, and Emily Blunt present the award for best original song at the Oscars on Sunday, March 4, 2018, at the Dolby Theatre in Los Angeles. (Photo by Chris Pizzello/Invision/AP)

A few days ahead of Sunday night’s 90th Academy Awards, the gossipmongers at TMZ spilled some pretty serious beans: Warren Beatty and Faye Dunaway were returning to announce the Best Picture winner. Just last year, the pair bungled that very same task, announcing that La La Land had won—before it was revealed, in the celebration, that the wrong card had been provided and the real winner was Moonlight.

Call it a mulligan afforded to two Hollywood legends whose mistake wasn’t really their own. But as it turned out, the Beatty/Dunaway do-over was the capper of an all-night attempt to make an in-joke at the expense of the Academy Awards themselves. “Presenting is lovelier the second time around,” said Dunaway. “This year, when you hear your name called, don’t get up right away. Give us a minute,” joked Jimmy Kimmel, returning to the host’s job. “We don’t want another thing.” The awards’ official auditors, PricewaterhouseCoopers, assured the media that they were introducing new fail-safe protocols to prevent gaffes in the future.

But that’s just a reminder that when it comes to the Oscars, over-rehearsed, overly careful tedium is the goal. Indeed, viewers were spoiled rotten in 2017, with the Best Picture envelope mix-up standing as one of most memorable moments in the history of the Academy Awards, right up there with the time a streaker blew past host David Niven in 1974. Even forgetting the way it saw a hoary Hollywood musical beat out at the last second by an indie bildungsroman about the life of a gay black kid, the 2017 Best Picture breach was a rare moment of genuine excitement in a ceremony typically defined by its conservatism, and predictability. And even in a year where Hollywood itself is meant to be undergoing a high-profile recriminating reckoning, show producers’ efforts to flash a blinding-white Beatty smile at a gaffe so as to get back to the program only reflects the Academy’s broader deep-rooted instinct toward the recursive in general. Last year’s wild affair let us briefly forget an essential truth about Hollywood’s big night: The Oscars are bland and boring, and nothing will change it so long as the evening won’t allow for a little bit of the surprise that made last year’s so thrilling.

There were some interesting moments this year, to be sure. Jordan Peele taking Best Original Screenplay for Get Out, which is both a horror movie and a searing critique of American racism and white liberalism, was genuinely surprising and well-deserved. Cherokee actor Wes Studi introduced a tribute to on-screen depictions of Americans serving in foreign wars, which resulted in smatterings of reluctant-seeming applause. Roger Deakins taking home a Best Cinematography trophy after 14 (!) nominations also likely pleased a lot of speculators. Emma Stone introducing the Best Director nominees as “these four men and Greta Gerwig” was also pretty funny.

But otherwise, the 2018 Oscars were what you’d expect. The Shape of Water, largely seen as the frontrunner for the Best Picture prize, took home the trophy, and its helmer, Guillermo Del Toro, won Best Director honours, despite being a deeply overrated filmmaker who produced a subpar film. A bad movie beating out some much better movies for the major awards, too, feels sadly par for the course. And one of the evening’s feebler segments saw Kimmel and a cadre of actors trekking across the street to surprise viewers at a preview screening of A Wrinkle In Time. Besides serving as a nice promo for the forthcoming film—which, like Oscar broadcaster ABC, is a Disney-owned trifle—it was essentially a tamer replay of a similar stunt that occurred last year, when Kimmel had hapless Hollywood tourists led through the actual Oscar ceremony itself. This year’s live prank was totally same-y, if not a little despairing.

READ MORE: The problem with The Shape of Water and ‘woke’ cinema

And the industry’s gravest gaffes were mostly skated over. Kimmel’s opening monologue read more like an RSS feed compressing the news of the past six to eight months, from the allegations against former producer Harvey Weinstein to the wage gap between Michelle Williams’s pay and Mark Wahlberg’s for reshoots of All The Money in the World, to the Parkland shootings. And despite self-effacing jokes about the Oscars’ whiteness, a more useful way forward for representation would have been giving the hosting gig to an effortlessly funny woman of colour like Tiffany Haddish or Maya Rudolph, whose tag-team presenting act improbably made the live-action short film categories two of the most exciting awards of the whole broadcast. The plodding, pre-award montages felt like extended advertisements for the art of cinema itself, as if this year’s Academy Awards were desperate to redeem not just an amoral industry, but the medium on which it was built.

It’s often said that NASCAR viewers watch NASCAR in the hopes of seeing a car crash. What that joke elides is the more common reality that, most of the time, watching NASCAR usually amounts to tracking very fast cars as they speed around in predictable, repetitive ovals. Ditto the Academy Awards—or any major awards show broadcast, really—which are so often defined by their unlikely amalgam of anticipation and monotony.

If the Academy Awards are serious about reinvigorating their annual to-do, and boosting its sagging viewership, they should be removing failsafes and preventative protocols, and exploiting the volatility of the live TV broadcast format. Forget safeguards and fool-proofing the ceremony. Volatility, excitement, even embarrassment should be encouraged, not purged. Of course, it’s too much to hope that “Hollywood’s biggest night” be defined by an anarchic cavalcade of pranks, japes, and egg-on-the-face envelope distribution errors. At its best, that dullness serves a purpose: It is the backdrop of boredom and blandness out of which an explosion of true surprise can emerge. And so we keep watching, waiting for the crash, the screw-up, the off-colour joke, the loosed streaker and the smile curling at the corner of David Niven’s lips.

If these moments happened all the time, they wouldn’t be as exciting. But what this year’s by-and-large boring, by-the-numbers, totally disappointing ceremony proved is that they need to be permitted to happen.