What to see at the movies this weekend

There’s one movie everyone is dying to see this weekend, and that’s Gravity. But if you want to avoid the date-night horde, it’s not the only option. Of three other new releases I’ve previewed, I can recommend two: Parkland and Muscle Shoals. As for Runner Runner, unless you are a desperately craven fan of Justin Timberlake, Ben Affleck or both, stay clear.

Reviews of all four films:

Yes, it lives up to the hype. Gravity is an unadulterated blast, and I didn’t even see it on an IMAX screen.This 3D space thriller about NASA astronauts who face a calamity while repairing a space station is quite unlike anything we’ve seen. Sandra Bullock—who is supported by George Clooney but spends much of the movie alone—gives a bravura performance that raises the bar for the female action hero and sends it spinning into a whole new orbit. I don’t tend to use the word “awesome,” but in the case of Gravity, it’s oddly precise. Directed by Alfonso Cuarón—known for Y tu mamá también, Children of Men and the best of the Harry Potter movies—this is a funhouse ride that invents its own formula and cranks adrenaline to giddy heights. It also achieves moments of transcendence and beauty reminiscent of 2001: A Space Odyssey and The Tree of Life. It accomplishes this even though it’s a whole-hearted popcorn movie, free of pretense.

Plot summary would be a crime—aside from the inciting incident in the early minutes of the film that gives us our first bungee-jump jolt. A catastrophic accident cuts a rookie astronaut (Bullock) loose from the hull of a space station 400 km above the Earth. Radio contact with Houston has been lost. She plunges into panic. She’s losing oxygen. She’s breathing fast and hard. Condensation forms inside her helmet, and behind the glass, her eyes are wide with fear. The rest of the crew are dead, but for a veteran astronaut (George Clooney), who’s stuck in the void with her, and whose bedside voice is in her helmet, urging her to calm down before she drowns in her own carbon dioxide. They are a makeshift couple—in a romcom gone terribly wrong—clinging to each other by a tether, as alone in the world as two people possibly can be. That’s just the start of a movie loaded with moments that literally take your breath away.

It’s inspiring to finally see 3D space adventure with Hollywood stars that does not involve alien monsters or threats of apocalyptic doom. The 3D, by the way, is for once utterly appropriate, and so seamless we forget we’re watching 3D; we’re just lost in space. Gravity is a film without gravitas, a weightless entertainment. Not that there’s anything wrong with that. For a movie about how terribly alone we are in a cold, empty universe, it’s strangely uplifting.

Peter Landesman directs a crack ensemble in a breathless re-enactment of what went down in Dallas on Nov. 22, 1963—the day of John F. Kennedy’s assassination—and the events leading up to his funeral. The title refers to the Dallas hospital where a young surgical resident (Zac Efron) fights to save Kennedy’s life, then struggles to save his accused killer, Lee Harvey Oswald, two days later. As well as the surgeon, the film dwells on four other traumatized characters who are swept up in the action: Abraham Zapruder (Paul Giamatti), whose 8mm film becomes a historic document; Dallas Secret Service chief Forrest Sorrels (Billy Bob Thornton); James Hosty (Ron Livingston), an FBI agent investigating Oswald prior to the assassination; and Oswald’s estranged brother, Robert (James Badge Dale). Shot in a style of handheld verité, intercut with archival footage, this is gripping drama. The camera lingers too gratuitously on a weeping Jackie Kennedy. Otherwise, the film finds its strength in the quintet of lesser known players, especially Zapruder and, oddly enough, Oswald’s stoic brother, who’s cast in a heroic, almost Kennedy-esque, light. For more on the film, here’s my magazine interview with Landesman. 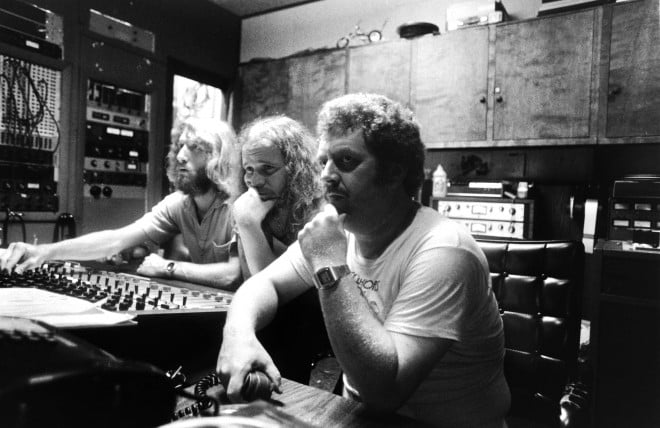 It’s an Alabama town of just 13,000 people on the Tennessee River, but Muscle Shoals has been an extraordinary wellspring of hit music. The Maysles brothers filmed memorable scenes of the Rolling Stones recording Wild Horses there in the classic 1970 documentary Gimme Shelter. Now novice director Greg “Freddie” Camalier enshrines this strange little music mecca in a documentary that shows just how incredibly far its influence has spread. For anyone who cares about the roots of R&B and rock’n’ roll, it’s a must-see. The father of the Muscle Shoals sound was, Rick Hall, an American dreamer who grew up literally dirt poor, in a country house with a dirt floor. His Fame recording studio—with its house band of local white boys called the Swampers— recorded a string of massive hits for the likes of Wilson Pickett, Etta James and Aretha Franklin. The fact that the heaviest black R&B of the 1970s was forged by white musicians in a state with one foot still in slavery was not lost on Pickett: “You could see the cotton fields from the studio!” Even Jimmy Cliff, the godfather of reggae, found his first groove with these guys, recording songs for The Harder They Come.

Meticulously researched, it weaves archival footage and fresh interviews with a pantheon of music legends —including Pickett, Franklin, Mick Jagger, Keith Richards, Percy Sledge, Alicia Keys, Greg Allman and Bono. The film recreates some electrifying moments of R&B history, notably Sledge’s 1966 recording of When A Man Loves a Woman, the first track Hall laid down in his studio, and I Never Loved a Man the Way I Love You (1967), Aretha’s breaththrough hit. And the vérité scenes from Gimme Shelter are timeless, especially the luxurious close-ups of the Stones basking in the playback of the freshly recorded Wild Horses.

Sledge and Pickett are the documentary’s most engaging raconteurs. (For a glimpse of Sledge, go to Muscle Shoals video clip.) The film’s narrative, meanwhile is anchored by Hall, a sad, stoical figure who lost his brother and his parents in various tragic circumstances—then lost his band, the Swampers, when they struck out on their own to create a rival studio across town, where the Stones came to visit. They would go on to record just about everybody, from Lynyrd Skynyrd to Paul Simon, Bob Seger to Bob Dylan.

If it’s possibly to make a hagiography about a place, Camalier has done it. His filmmaking has the earnest, on-the-nose approach of someone doing it for the first time. He lingers on too many rhapsodic landscape shots, as he makes the case that the Muscle Shoals is a site of magic and magnetism—especially in the river, which the Native Americans believed was home to a singing female spirit. Yet it’s hard to argue with his point. The place does seem to have an uncanny power. As well as  producing two legendary recording studios, it also produced Sam Phillips, founder of Sun Studios and incubator of Elvis Presley. And it was Helen Keller’s hometown. Maybe there is something in the water after all. 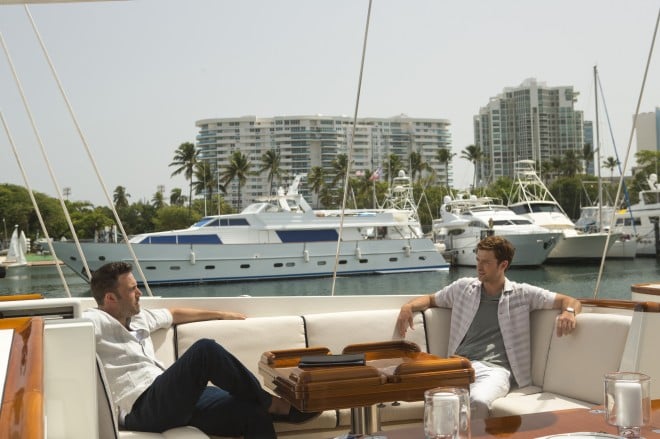 Maybe I’ve just been doing too much binge-watching of Breaking Bad. But after the quicksilver cut-and-thrust of its epic narrative about ordinary folk caught up in crime, Runner Runner just seems slow and dumb, a movie that’s trying to act so cool it’s afraid to break a sweat. Like a kid in a suit two sizes too big, Justin Timberlake seems lost in his underwritten role as Richie Furst, a Princeton student who has been financing his Master’s degree with an online poker operation. After a disastrous loss, Furst discovers he’s been swindled and flies to Costa Rica to confront gambling kingpin Ivan Block (Ben Affleck). Richie Furst, Ivan Block? Where do they get these names?

Dazzled by money and power, Richie get sucked into Ivan’s orbit with unlikely naivete for someone who’s supposed to be so smart. Affleck plays against type as a suave, glib psychopath who keeps crocodiles on hand to indulge his Dr. Evil impulses. Director Brad Furman (The Lincoln Lawyer) pushes the the sludgy narrative forward until, for lack of any real dramatic resolution, he shakes the camera to simulate excitement. The movie is idly watchable. Shot in Puero Rico (which allows the script to characterize Costa Rica as a corrupt haven for the underworld), the tropical settings have a low-rent James Bond decadence, complete with Gemma Aterton going through the motions as an ersatz Bond girl. The gambling jargon is nifty, with phrases like “I’ll fade your action,” and Affleck is amusing. But Timberlake, the hapless victim of a banal script, lacks the power and range to rise above it.