Hyena Road, which premieres at TIFF, explores what constitutes victory in a land of unwinnable wars 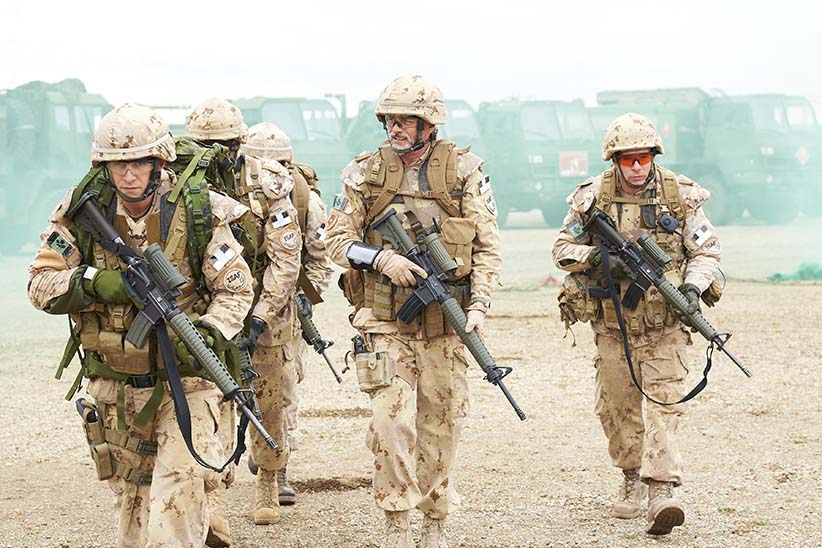 A road runs through the Horn of Panjwai district, Afghanistan, linking the impoverished residents of its western region with the farm markets and government services in Kandahar province. It is about 20 km long and five metres wide and was built during the fall of 2010 and the spring of 2011 along the route of a dirt track seeded with improvised explosive devices (IEDs), through a region of uncertain loyalties, only partly wrenched from control of the Taliban. Most Canadians have never heard of Route Hyena, or Hyena Road, though their taxes paid for it, their soldiers died for it; though it was Canadian Forces soldiers who helped put the Taliban on the run during the years before construction and who led and guarded the project with Afghan and American crews.

A Canadian brigadier general on the ground there called Hyena, with justifiable pride, “a dagger through the heart of the Taliban.” But it is just a road. It is not Dieppe or Normandy, not Vimy Ridge or Passchendaele, not likely to be seared into the national consciousness in the manner of Canada’s greatest military victories and defeats. But in Hyena Road, writer, producer, director and, yes, actor Paul Gross found a vehicle for his ambitious, ambiguous and, considering his job title, ambidextrous examination of what he calls “post-modern” warfare. What constitutes victory in a land of unwinnable wars?

Hyena Road, which premieres at the Toronto International Film Festival Sept. 14 and opens in theatres Oct. 9, is something of an accidental war movie, born of Gross’s meet-the-troops visit to Afghanistan in 2010. He was invited in part because of the ties he formed with the Canadian Forces while filming Passchendaele, his mud-and-blood First World War epic. That film, which drew inspiration from his grandfather’s war experiences, was 10 years in the making and chewed through $20 million, astronomical for a Canadian film. “I really had no intention of ever doing another film that was centred around war just because of ferocious problems that are attendant to that,” says Gross.

Yet he couldn’t shake the Afghan dust. “It was mesmerizing. I’d never been in an actual war zone. I don’t know what exactly I expected, but it wasn’t anything like I expected,” he says of his first visit. “I just felt terribly ill-informed by the press and by the government until I got there. That’s when I thought, ‘Maybe we should try to do something about this. We should have a look at what we are actually engaged in.’ ”

He returned with a film crew, spending two weeks at forward operating bases, still feeling his way. “We were just photographing everything, not entirely randomly but almost randomly. Anything we could point a camera at.” He spent his nights talking to soldiers, hearing their stories, letting them vent, realizing, as if there had been any doubt, that this was a different sort of war. Different than his grandfather’s war; different than the military life he’d known, knocking from base to base as an army brat while his father was a tank commander. From their stories he wove a fictional narrative.

He sees Passchendaele and the First World War as an end to romanticism, “baffling, but relatively understandable. There were lines of dressed soldiers battling away at each other seemingly pointlessly for four years. The real nature of Afghanistan is so bewildering, I think, for everyone up and down the chain of involvement,” he says. “It’s very hard to find your bearings in the midst of that, particularly for an individual soldier. It’s trying to find sure moral footing in a place that has no moral compass, where there are so many different agendas working at odds with one another.”

Gross chose to focus on three interwoven stories, three different wars in essence. There is an elite Canadian sniper team with Allan Hawco as Travis Davidson, playing second-in-command to Rossif Sutherland as Ryan Sanders, who clings to a fraying belief that one bullet can change everything. Gross is world-weary intelligence officer Capt. Pete Mitchell, playing three-dimensional chess in the dirt, buying favours with skin cream, shampoo and guile, willing to sacrifice the pawns necessary to the end game—if there is an end game to achieve. All this winning hearts and minds stuff is public relations for the folks back home, he tells Sanders. What the Afghans want is our money and a bit of stability. “There is no winning.” 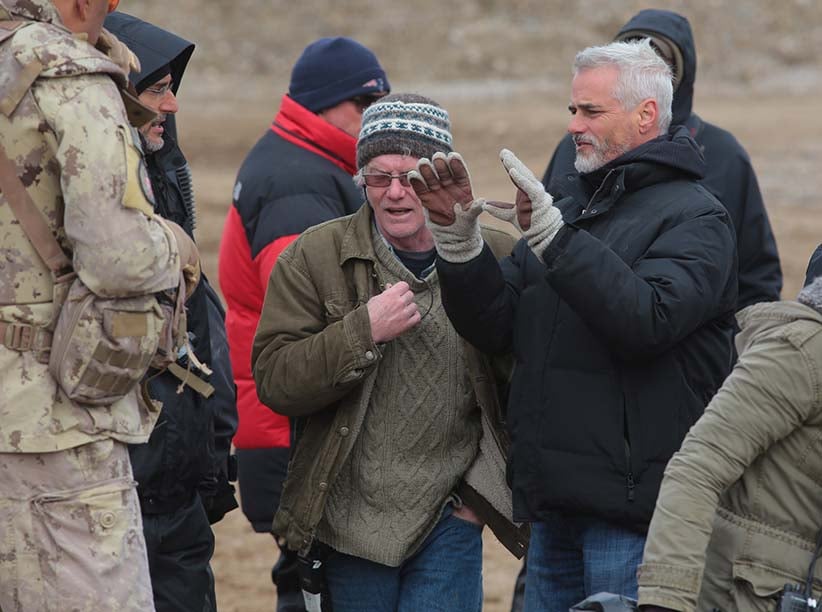 Finally there is the Ghost, based, Gross says, on a real mujahedeen fighter, legendary for laying waste to Soviet troops during their ill-starred occupation of Afghanistan during the 1980s. The Ghost returns to Kandahar under shadowy circumstances and with uncertain motives beyond his ostensible support for Canadian and NATO forces. In a casting coup, Gross chose for the role a non-actor, Neamat Arghandabi, who was then working with coalition forces. What he lacked in acting credits he made up for in credibility. Not only was he a one-time policy advisor to current Afghan Prime Minister Abdullah Abdullah, he’d fought under the Ghost as a young man. “So,” says Gross, “he was 16, 17, 18, he was living in a cave, coming out and knocking Russian helicopters out of the sky.” At one point, Gross was directing a battle scene and he reminded Arghandabi he was fighting with a bullet wound. “Oh yes, that is right, I shoot with one arm. I had to do this for a month against the Russians because my arm was no good,” he told Gross.

“He just brought such a gravity to the whole Afghan side of it,” says Gross. “The lives they’ve lived. The history they’ve had.”

The movie itself, despite a credible big-budget look and feel, was shot for a relatively modest $12 million-plus. While Gross had hours of usable outside-the-wire location footage from his time in Afghanistan, shooting a movie in a war zone was obviously impossible. He split the filming between CFB Shilo, outside Brandon, Man., and Jordan, where the arid terrain was similar to Kandahar’s. Of course, moving lethal-looking prop guns and military ordinance into the Middle East was not without its challenges. At one point, a box of dummy grenades passing through the scanners at Pearson International temporarily shut the airport down, says Gross.

For Hawco, who joined the shoot just days after the emotional wrap of the sixth and final season of his hit series Republic of Doyle, Hyena was both a “palate cleanse” and an education. Both active and retired snipers put his team through a military boot camp, teaching them advanced weapons handling, kill strategies and proper terminology. You won’t find their names in the film credits, and the actors couldn’t even pose for photos with them. “They’re valuable targets to the enemy, which is so bizarre,” Hawco says. “They were the real deal, oh yeah.”

The end result, says Hawco, is some of the best work his friend Gross has ever done. “I don’t feel his intention was to glorify war,” he says. “I feel that he is examining what the conflict was, what the different ambitions were that people had, the different conflicts that come up within those ambitions.”

Both he and Gross share enormous respect for the soldiers who slog through such muddied marching orders. “The Second World War was pretty specific. We had to stop the maniac Hitler from taking over the world and destroying everybody. You start looking at modern warfare, and the lines are certainly a lot more blurry,” Hawco says. “You believe in the threat or not, it doesn’t matter. They do, and they go out there and sacrifice themselves. I find that extremely moving.”

Put the question to Gross. Does he side with the cynical realpolitik of his character, Pete, that this may be an unwinnable adventure prettied up with hearts-and-minds window dressing, or a sniper’s belief that a bullet can make a difference? It’s a little of both and more besides. There is little understanding of what the government sent in its fellow citizens to do on the nation’s behalf, Gross says. “We don’t understand these places. The conflict in Afghanistan was never supposed to go on for 15 years. We were in Afghanistan longer than we were in the First World War, the Second World War and the Korean War combined,” he says. “I think one of the problems with these long counterinsurgencies, it’s difficult to know where the end is. ‘What is the end status?’ as Pete says. It just arrives. One day there’s a memo sent out: ‘Hey, we’ve done our job.’ ”

Ignore the unfathomable politics, as the film does, and you’re left with men and women tasked with a dangerous job in a land where, as Pete says, “even the dirt is hostile.” With taut pacing, Gross captures the soldier’s-eye view. He uses to stomach-churning effect the moral ambiguity, the hair-trigger judgments, the explosive uncertainty of every step taken. The firefights when they erupt come almost as a relief. This I understand. This I have trained for. These men want my death. Here is my enemy.

Certainly, there were no wild home-front celebrations when the last Canadian troops left the fight in 2014; no treaty to sign or victory to mark, not when others remain to die in the dust. Maybe the end status is just surviving places like Hyena Road and avoiding the parade no soldier wants—the convoy from CFB Trenton to the coroners complex in Toronto, along the road they call Highway of Heroes.