Intriguing! But he didn’t include the Twitter handle for John Curtas, who is a food reviewer for Eating Las Vegas, or a link to his story, so I Googled it because I’m working.

Here’s the article. If you’re interested in the mysterious, and sometimes dark, underworld of social media, please read it.

In short, Curtas says that he knows that Bourdain and his wife Ottavia, who was blogging for New York’s Grub Street at the time, were eating at Mario Batali’s restaurant Carnevino in Las Vegas because no one else there serves riserva-style steak, which isn’t charred, and that’s how Ottavia described her beef, along with: “It looks boiled. I cut into it and it’s hard, and gray inside; it’s well done.”

However, Curtas’s piece is made redundant because Bourdain says he and his wife weren’t staying at the Venetian/Palazzo, which houses Batali’s Carnevino.

But Bourdain didn’t let up: he followed with these tweets, directed this time right at Curtas. They are slightly more aggresive.

Did Bourdain just give Eating Las Vegas more hits than they’ve ever received–I had trouble loading the page more than once–with a single tweet? Or did he call out a food reviewer for attempting to be a bit of a smarmy private eye for his 5,000 followers, including chef Daniel Boulud?

Wait, I just checked back in and Curtas has replied to Bourdain. It seems that the whole thing has spiralled down into name-calling now (read from the bottom-up): 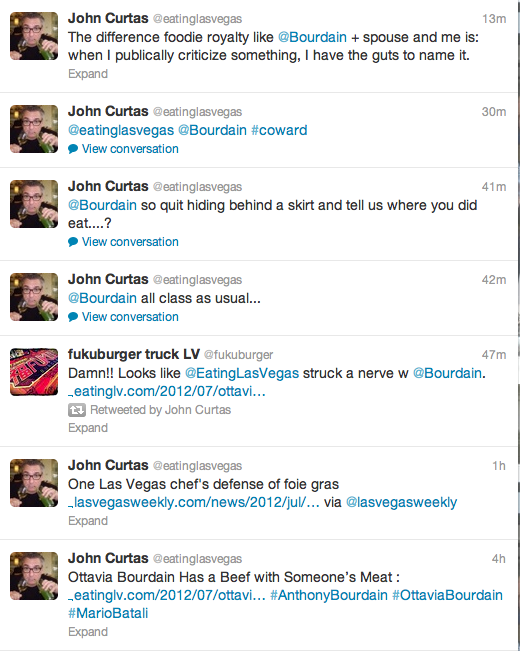 Yikes. Well, even though there’s no rule book for Twitter, this might be a good reminder for food industry folks (or everyone) that their tweets are…very public.

**CORRECTION: Bourdain did not delete those tweets. I was looking at the no-reply stream of his twitter feed, rather than the “all stream,” which was careless of me. Thanks for pointing this out caylo (see comments below.)

Okay, I’m out.* This is like the time I started watching Extreme Makeover: Weight Loss Edition and couldn’t stop.

But one last thing: you know what I find most shocking here? That Curtas reported: “We also know Molto Mario asked Mr. Bourdain (via text message) if it was his steakhouse to which Mr. Bourdain’s wife was referring, and Mr. Bourdain denied that it was.”

I didn’t know food reviewers had access to text messages, which are presumably quite private, of famous chefs.

*Okay, I peeked one more time: Ottavia is in on the Twitter take-down now too. 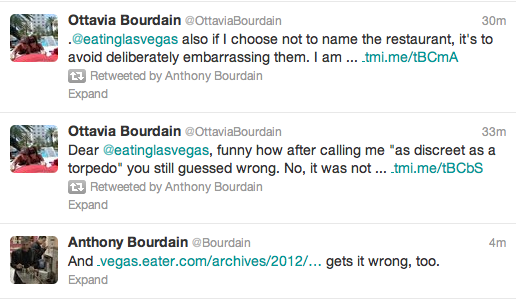