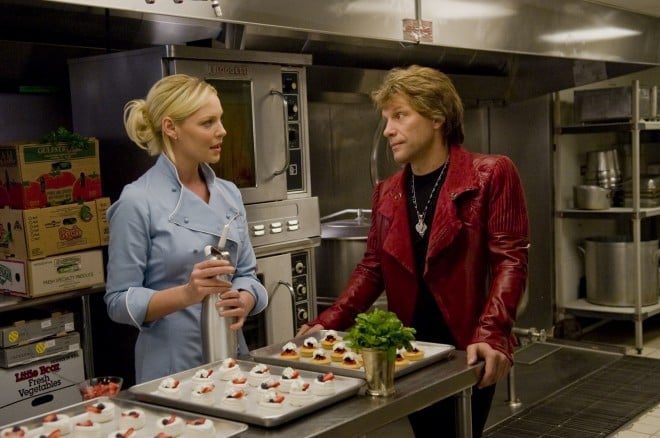 It’s a classic choice. You’re looking for an easy-going, no-brainer date movie. Everyone is raving about The Artist, including me. But it’s silent and black-and-white, and New Year’s Eve is beckoning with all those stars and shiny colours. You wonder if, just maybe, it could be a guilty pleasure. Stop!! Back away from the multiplex!! Don’t let the all-star cast fool you. The glitzy lure of New Year’s Eve, not unlike the night itself, is a trap. This regrettable confection is directed and produced by Garry Marshall, who also gave us Valentine’s Day, and the formula remains the same: movie as celebrity mix tape. Recruit as many stars as possible, throw them together in a gaudy holiday punch bowl of sentimental shlock, and wait for the box office to get high. But watching this movie was like going on a bender and mixing too many multi-coloured drinks. Usually I don’t mind watching bad movies. It’s my job, after all, and even the worst movies tend to offer some some bonbons of pleasure, guilty or not. But NYE, which takes place in NYC, is exceptionally toxic. Waiting for that ball to drop at Times Square felt like an effing eternity.

The script plays like the Hollywood casting version of a computer dating program. Jon Bon Jovi (renamed Jensen) is performing a gala gig at Times Square, while trying to win back the fiancee he jilted—Katherine Heigl, the event’s catering chef. Ashton Kutcher, a holiday grinch, is stuck in a freight elevator with Lea Michelle (Glee), a back-up singer trying to make it to Jensen’s gig. Michelle Pfeiffer is a sad and dowdy music biz assistant who quits her job and gets squired around town by a bike courier half her age (Zach Efron). Sarah Jessica Parker, sexless in the city, frets about her teenage daughter chasing her first kiss in Times Square. Seth Meyers and a pregnant Jessica Biel in a maternity ward, with their eyes on the cash prize that comes with giving birth to the year’s first baby. A tuxedoed Josh Duhamel smashes his car en route to a mystery date. Hillary Swank is a Times Square official in charge of the festivities, who has a crisis when the big glitter ball gets stuck half way up the pole. And finally, a grizzled Robert De Niro is on his deathbed, trying to make it to midnight, and being comforted by a perfect nurse in the form of Halle Berry—it makes you wonder if that’s what it took to get De Niro to take the role.

And just when you think things couldn’t get any worse, a Skype hook-up with a soldier in Afghanistan dials the pathos up to 11.

Within this wretched jumble, there were some passable moments. I could watch Michelle Pfeiffer in anything, although I felt more sorry for her than for her lonely character. Seth Meyers brings some sketch-comedy spark to his scenes. And there was some tacky chemistry between Kutcher and that Glee ingenue (he keeps staring at her with a smugly lascivious gleam in his eye, as if he can’t get over the fact that he’s trapped with a foxy brunette who’s actually younger than him.) But all in all, this New Year’s Eve is all guilt, no pleasure. Just time and money that you’ll wish you never spent. Want a real confection? Go enjoy the divine patisserie of The Artist.