Portrait of a failed folkie lights up Cannes 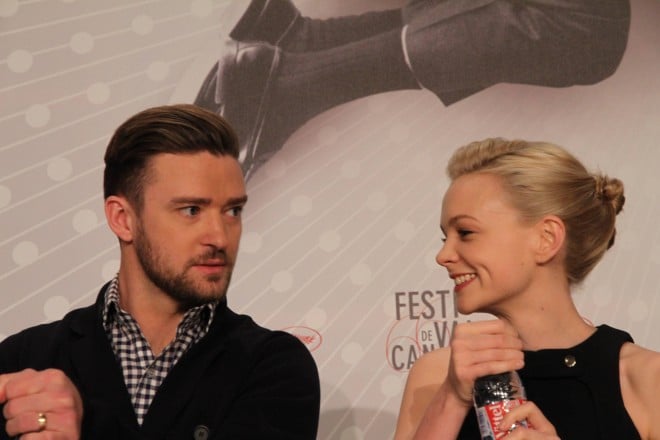 Justin Timberlake and Carey Mulligan at the Cannes press conference for 'Inside Llewyn Davis' / photo by Brian D. Johnson

I tend to approach a new Coen brothers movie with the wariness that comes from being a fan who’s been burned too often. In their lesser films, such as Burn After Reading, their wit can curdle into smugness. But when the brothers let their passion override their reflexive cynicism, they’re amazing. In No Country for Old Men and True Grit, they graduated to an epic scale with an emotional maturity and lyrical grandeur they’d never attempted before. Now with Inside Llewyn Davis, which premiered in Cannes yesterday, the Coens retreat to a smaller canvas. But without softening their signature edge of sardonic humour, they strike a chord of unprecedented tenderness. This is the Coen brothers unplugged, and it’s a slice of pure heaven. I didn’t want it to end, something you can’t say about many films in competition at Cannes.  And I’m not alone. Inside Llewyn Davis arrived as an exhilarating tonic amid the visions of violence and angst that tend to be the red meat of a Cannes competition. Finding the sweet spot between droll humour and bittersweet emotion, it was universally embraced by critics as a rare treat—a Coen brothers comedy with a heart of gold.

Loosely drawn from The Mayor of MacDougal Street, a memoir by folksinger Dave Von Ronk, the movie features a breakout performance by Oscar Isaac, whose first name could be prophetic. He’s a riveting presence as both an actor and singer. A Julliard-trained musician, Isaac performs several of Van Ronk’s ballads under the musical direction of Coen brothers veteran T-Bone Burnett. The songs are sparsely measured out, but they play in their entirety as high points of the drama, making time stop with an uncanny intimacy. 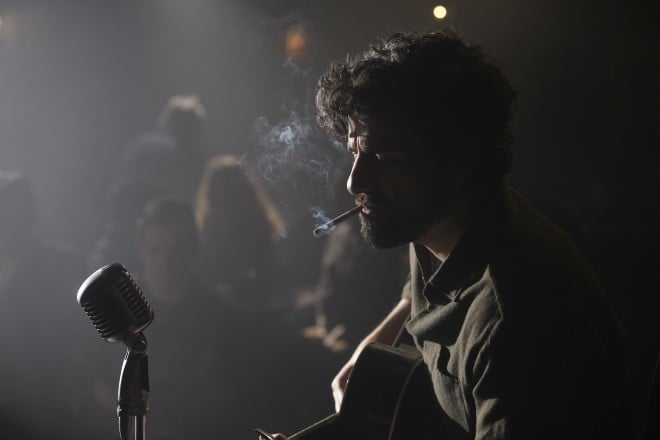 Oscar Isaac in the title role of 'Inside Llewyn Davis'

Isaac gives the kind of star-making performance that Cannes exists to discover. You might remember him as Carey Mulligan’s husband in Drive, but you won’t recognize him here. As the film’s title character, he plays a fictional folksinger inspired by Von Ronk—a penniless troubadour trying to make it in Greenwich Village in 1961, on the cusp of the wave that carried Bob Dylan to stardom. “Obviously I’m not a six-foot-four Swede,” said Issac at the movie’s press conference, referring to Van Ronk, Also, his sweet tenor is a far cry from Van Ronk’s gravelly delivery. No matter. He’s not meant to be Von Ronk. “It’s really in the music that you see his soul coming out,” said Isaac. “That’s his little bluebird that he shows to people.”

The film follows Llewyn on a shambolic odyssey, which takes him from being beaten up in an alley by a mysterious stranger to a road trip that leaves him adrift in the snows of Chicago. Along the way, he hitches a ride with an abrasive, jazz-obsessed blowhard (John Goodman)—a Dr. John figure recast as an obese, foul-mouthed slob. The character, said Ethan Coen, was inspired by “a lot of old gasbags” who crop up in the work of John Portis, who wrote the novel True Grit. “He’s that last person you’d want to be stuck in a car with.” 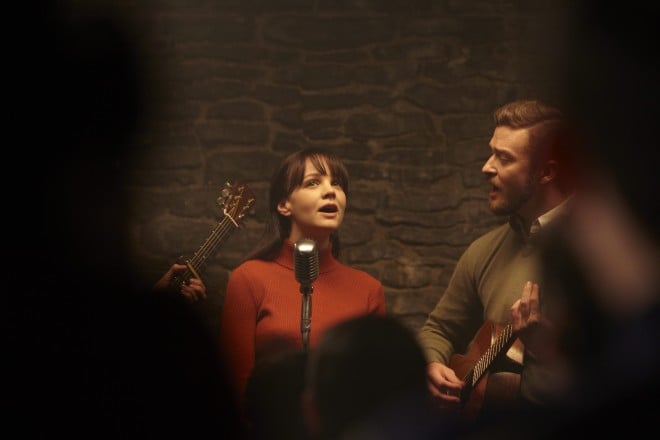 Carey Mulligan and Justin Timberlake in 'Inside Llewyn Davis'

The movie’s biggest stars, Carey Mulligan and Justin Timberlake, finesse supporting roles, and sing together, as Jean and Jim, a clean-cut folk duo. Adam Driver (Girls) tosses off a priceless turn as a baritone harmonizing on a novelty song in the studio called Please, Mr. Kennedy.  And a runaway cat plays a crucial role—a literal running gag. “The movie doesn’t really have a plot,” admitted Joel Coen. “That actually concerned us at a certain point. It’s why we threw the cat in.”

A rootsy interpreter with a manic concern for authenticity, Llewyn is both the self-destructive author of his own misfortune and a victim of bad timing. Exactly where great talent intersects with the tipping point between obscurity and stardom generated lots of discussion at the press conference.

“There’s a lot of analysis now,” said Timberlake, “a lot of analytics about success or failure. I’ve been in the right place and met the wrong people. I’ve been in the wrong place and met the right people. I don’t know that I would measure the success or failure of it by how [something is] received. You have to let it live in the ether. The ones I’ve come to know who have had lasting success in any field are the ones who understand that and just let it go—not get caught up in the rat race.”

“You only need a minute,” offered T-Bone Burnett. “There may be a reviewer for the New York Times and two guys may be playing, one after the other, and one guy may be tired and one guy who’s fresh that comes in, and owns that particular moment that the other person might have deserved. In Hollywood I’ve seen it happen over and over. An ingénue comes to town, three days later she’s in Frank Sinatra’s house.”

“I think we know how that one happened,” cracked Timberlake. “It was a specific isolated incident.” Timberlake  later observed that “a wise man” once told him: “If you can be the second guy to do the first thing, you will reap all the benefits for it. Maybe Llewyn was just the first guy.”

In that case, Bob Dylan would be the second guy. And for the Coens, who hail from Dylan’s home state of Minnesota, this is clearly a film that tiptoes around some sacred ground. “I feel uncomfortable talking about Bob Dylan,” said Ethan Coen, “because he’s the elephant in the room. Bob Dylan is like Mount Rushmore now. You can’t even talk about him. What was interesting to us was the lesser known scene, which was the scene that Dylan came into.”

Inside Llweyn Davis is slated for a December release in North America.