Ben Affleck's 'Argo': a bonanza of secrets and lies 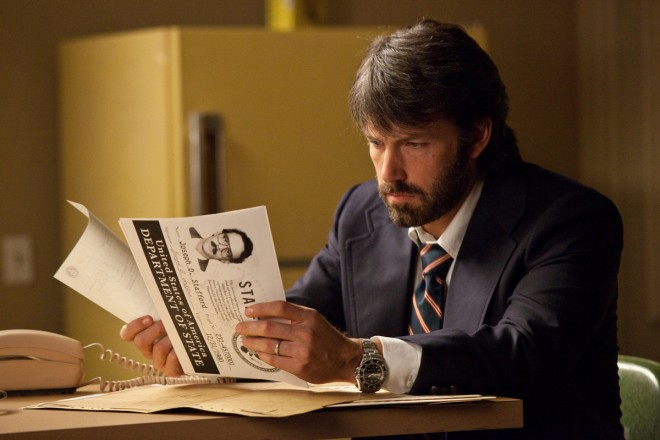 On Day 2 of TIFF, movies are spinning like wheels in a slot machine and producing some startling match-ups. At last night’s party hosted by the Toronto Film Critics Association I tried to keep my end up a conversation with the Globe and Mail‘s Johanna Schneller and the Movie Network’s Teri Hart, who were amazed at the number of hand jobs they’d seen in movies at the festival.  Between them, they’ve counted four, including scenes in The Master and Picture Day, which I haven’t seen yet. But I’ve witnessed a couple—one in Hyde Park on Hudson that’s powerful enough to the rock a parked car occupied by the polio-hobbled Franklin D. Roosevelt (Bill Murray); and in The Sessions, during a lesson from a sex therapist (Helen Hunt) treating a man paralyzed by childhood polio. Two hand-job polio movies in one festival—what are the odds? Then again, as I noted in an earlier blog, this is also a festival with two films about aging musicians losing their grip, A Late Quartet and Quartet.

In other news, tonight actor-director Ben Affleck premieres Argo, the stranger-than-fiction story of a fake Canadian sci-fi movie that was cooked up as a cover to facilitate 1980’s Great Escape of six Americans hiding in Iran’s Canadian embassy. Even stranger, just hours before the premiere Canada announced that it has closed that very same embassy in Tehran.

I saw Argo last night. It tells an extraordinary story about an operation that the C.I.A. had to keep under wraps for two decades, while then-Canadian ambassador Ken Taylor received all the credit. It starts as a comedy that unfolds like a real-life Wag the Dog, with a priceless, Oscar-worthy performance by Alan Arkin as the Hollywood producer who mounts the fake movie, lying through his teeth in a town where lies are hard currency. But then it morphs into a white-knuckled  thriller, which—not unlike Apollo 13—keeps us on the edge even though we know the ending in advance.

The movie’s pulse is juiced by a lot of obvious fictional embellishment. It’s a caper movie, not a docudrama, which brings the Hollywood fakery of the original ruse full circle. It’s a good ride. Starring as the heroic C.I.A. officer, Tony Mendez, a bearded Ben Affleck keeps his head down and delivers a tight, modest performance. But as a director he’s impressive,  expanding on the promise he showed in Gone Baby Gone and The Town. He’s adopted a much lighter style for Argo, with a zippy curve-ball narrative spins from wit to suspense. It could be this year’s Moneyball.

The film, meanwhile, is jammed with references that will tickle local audiences, ranging from the observational detail that Canadians don’t pronounce the second ‘t’ in ‘Toronto’ to a mention of the now-defunct Canadian Film Development Corporation—which financed more than its share of tax-shelter movies that were scams of one sort or another. There’s far more Cancon in this Hollywood picture than the two officially Canadian movies I saw today, both stories of foreign characters in foreign settings—Midnight’s Children (set in India) and Rebelle (set in Africa).

With its flamboyant mix of Canadiana and Hollywood self-satire, Argo would have made an ideal opening night film for TIFF. Looper, the sci-action movie that did kick off the festival, was an adequate choice but nowhere near as ironically appropriate.  I don’t know what happened behind the scenes. But one can only assume that Warner Bros. did not want that somewhat stigmatized opening night slot, and opted for the hotter showcase of Friday night.