Chasing bromance to the ends of the earth 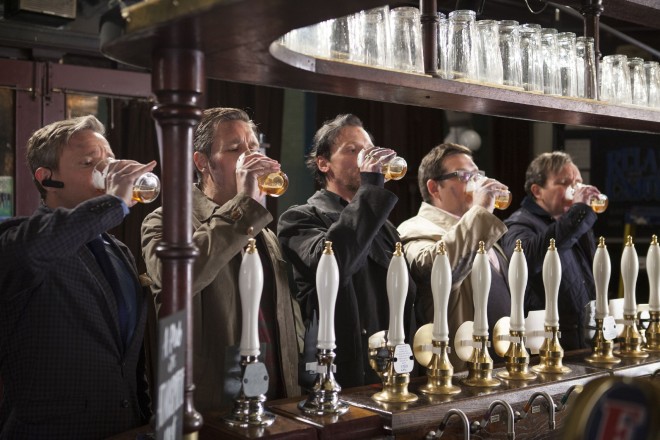 What a fitting way to wind down a summer of blockbusters about the end of the world. We’ve seen Armageddon come and go, week after week—Oblivion, The Host, After Earth, World War Z, Elysium, This is The End—often landing with a thud at the box office.  Now it’s closing time at the Apocalypse Lounge, and bringing us the last word on Doomsday are Simon Pegg, Nick Frost and their merry band of Brit pranksters, drinking themselves to the brink of destruction in The World’s End. This antic comedy is about a bunch of former schoolmates who reunite for a hometown pub crawl and barge headlong into the zombie apocalypse. Or, more precisely, an alien invasion of body snatchers.

Simultaneously smart and silly, The World’s End displays an ambidextrous wit that’s uniquely English, and proves that not all Hangover farces have to be dumb and ugly. But if you’re not quite up for the end of the world, you can settle for the end of the road with Prince Avalanche, an offbeat bromance about an odd couple of squabbling losers who bond over the bottle on a desolate highway running through a burnt-out forest.

So this is the way the world ends—or at least the summer—not with a bang but with a binge.

The World’s End was scripted by its director, Edgar Wright, and its star, Simon Pegg. They’re the duo who created Shaun of the Dead and Hot Fuzz with actors Nick Frost and Martin Freeman, who are back on board for this film. Although the stories and the characters in the three movies are distinct, The World’s End is being loosely billed as the third installment of a trilogy—linked to the previous films by a pub-centric setting and a diabolical blend of physical comedy, genre spoof and verbal wit.

The script was germinated by an idea for a pub crawl comedy that Wright had as a teenager, which he revived after seeing Superbad, the hit comedy that Seth Rogen and Evan Goldberg wrote as kids growing up in Vancouver. And, coincidentally, there are close parallels between The World’s End and the apocalyptic farce of This is the End, the feature directing debut from Rogen and Goldberg. Both involve an Armageddon party of intoxicated guys who end up brawling with aliens amid a splatter fest of cheesy special effects. But they could be case studies in the difference between American and British humour. For all its hilarity, This is the End serves up its broad gags squarely on the nose, one at a time. But amid the physical comedy of The World’s End, the verbal wit flows with such speed and subtlety, the mind has to race to catch all of the jokes.

Pegg leads the ensemble cast with charismatic swagger as Gary King, a 40-year-old adolescent who pursues his triumphant alcoholism with militant showmanship. Although he’s playing a buffoon, there’s a theatrical cadence to his performance that’s almost Shakespearean. This is a drunken lout in Falstaff’s league. As his straight man, a teetotaler who will inevitably fall off the wagon, Frost makes a magnificent foil. And as the boys attempt a 12-pub marathon, along for the ride is a token female, played by a spunky Rosamund Pike, who deflects Gary’s repeated bids for a sexual reunion in one handicapped washroom after another. I could go on to describe the zombie aliens, and what happens when you rip their heads off, but it would be a shame to spoil the party. 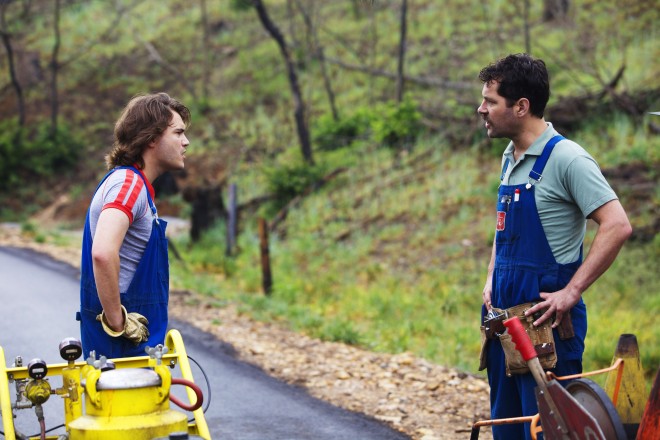 By contrast, the humour is strictly deadpan in Prince Avalanche, and it’s not the laugh-out-loud variety. This minimalist two-hander marks a stoic retreat to the indie frontier by writer-director David Gordon Green, whose career has ranged from the modest George Washington to the blockbuster Pineapple Express. Movies don’t get much quirkier than Prince Avalanche, a picture that’s every bit as odd as its title, which I still don’t get even after seeing the movie. Not that it matters. I did get the movie (I think), and grew to like it by the time it was over. It’s an acquired taste, one that starts to take you unawares mid-way through the movie, as an initial skepticism gives way to a warm buzz of affection for the characters. Prince Avalanche is a road movie that happily goes nowhere. It’s also a buddy comedy, yet one entirely lacking in the usual amenities—there’s no girl, at least not one who appears on screen. There’s nothing, in fact, to mediate the relationship: just a yellow traffic line that our reluctant buddies, Alvin (Paul Rudd) and Lance (Emile Hirsch), are painting down the middle of a two-lane road in the middle of nowhere. The location is a scarred tract of forest in a Texas state park that has been ravaged by fire, but it looks like it could be another planet. The film’s other worldly quality may also owe something to the fact that Green adapted it from an Icelandic movie, Hafsteinn Gunnar Sigurðsson‘s Either Way.

The men work alone on the road by day, and spend their nights together in a tent. Lance is not a happy camper. Alvin, who is in love with Lance’s sister back home, has hired him as a favour, but it’s one that this indolent young man deeply resents. His only goal in life is to go back to the city and get laid. Alvin, meanwhile, acting like an uptight scoutmaster, tries to keep him (literally) in line while patronizing him with unwelcome advice. The two men are stuck with each other, and aside from brief interludes with an eccentric trucker and a mysterious woman rummaging through the ruins of her house, they are the only characters in the movie. Eventually they break the tension of their fractious relationship by getting blind drunk.

A long way out of his romcom wheelhouse, Rudd wears a mustache that makes him look like a young Kevin Kline, and he’s replaced his usual easy-going persona with a punctilious, tight-ass manner that is, well, strangely reminiscent of Kevin Kline. But Hirsch, whose potential as an actor has sadly faded since the wonderful Into the Wild, has gained some weight—something his character morosely alludes to—and at times seems to be channeling Jack Black. And Hirsch conveys a young man’s torpid ennui with a raw candour that’s seems uncomfortably close to home.

But both actors’ performances ripen nicely, gaining authentic heft from what starts out as a cute contrivance. Green ekes an over-saturated beauty from vistas of the burnt-out forest and the emptiness of the road. In the tradition of David Lynch’s The Straight Story, or just about anything by Wes Anderson, this field trip into the wilds of American minimalism is strangely enchanting.

Also opening this week in Toronto theatres is The Grandmaster, a martial arts rhapsody by Wong Kar Wai, reviewed here.