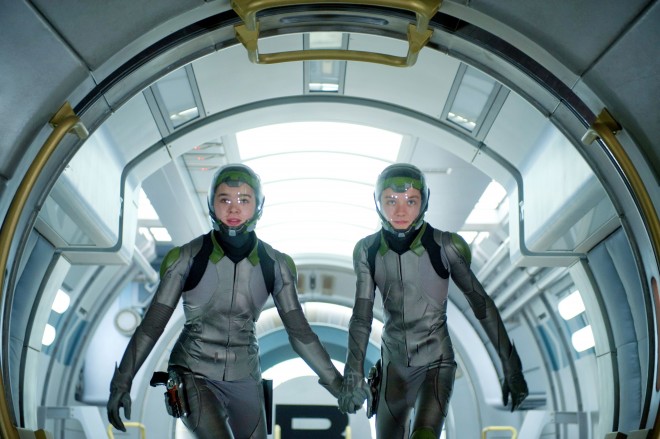 Kids in space, geezers in Vegas, father-son time travellers, and a gay bull rider—it’s a boy’s club almost everywhere you look. But what’s the best new movie opening this weekend? No contest. It’s Dallas Buyers Club, directed by Quebec’s Jean-Marc Vallée (C.R.A.Z.Y, Café de Flore), and starring Matthew McConaughey in a blistering performance as Ron Woodroof, rodeo cowboy turned AIDS activist. McConaughey and co-star Jared Leto, cast as a junkie queen, shed 80 pounds between them for their roles. And both are strong Oscar contenders. I’ve already written about Dallas Buyers Club and interviewed Vallée. So let’s look at the the other Boy’s Own adventures hitting the screen this week:

Cast in the role of Ender Wiggin is Asa Butterfield—like Harry’s Potter‘s Daniel Radcliffe and The Lord of the Rings‘ Elijah Wood, he possesses the one quality apparently essential to take down cosmic monsters: immense, crystal-blue eyes. In a story with a big anti-bullying theme, Butterfield plays a brainy new recruit who has to fend of jealous rivals in a space-station boot camp. He’s a scrawny pipsqueak with a killer instinct. And as an actor, Butterfield shows uncanny maturity and poise for a 15-year-old kid—those eyes generate an eerie intensity. But then, this is his third title role in a Hollywood movie,  after The Boy in the Striped Pajamas and Hugo. He’s an elite member of Hollywood’s own squad of child soldiers.

Butterfield is ably supported by a pair of Oscar-nominated teenage girls: Abigail Breslin plays his sister, and Hailee Steinfeld his boot-camp buddy. But even though Summit Entertainment is positioning Ender’s Game as a potential successor to its female-skewed Twilight franchise, this is very much a boys’ world. Two military commanders (Harrison Ford and Viola Davis) groom Ender to be the One—the gaming genius who can save the planet from another Formic invasion of aliens that resemble giant ants. And he finds a mentor in a legendary space hero played by a Maori-tattooed Ben Kingsley. Fast-tracked through cadet school, the boy has to outwit and outfight mean-spirited rivals in various simulations and games, including a zero-gravity team contest in a giant sphere that could be seen as a space version of quidditch.

Though this is not the kind of movie I’d pay money to see, Ender’s Game is good, inoffensive fun. And it’s nice to see Han Solo come full circle, as Harrison Ford applies his gruff signature to the role of the hard-boiled commander. (By this point, Ford is so routinely ornery I’m surprised he hasn’t lent his name to a men’s fragrance called Gruff.)

But the film has become a target of controversy. The book’s author, Orson Scott Card, has aroused the ire of LBGT groups with his extreme views opposing gay marriage and calling for the criminalization of homosexuality. Given that Card is on board as a producer of the film, at least one group has called for a boycott. But there’s no evidence of Card’s toxic opinions infecting the film, which (blue eyes notwithstanding) presents a tableau of diversity. “It’s dreadfully ironic,” director Hood said in an interview with The Advocate last July. “Orson wrote a book about compassion, and empathy, and yet he himself is struggling to see that his position in real life is really at odds with his art.”

Although Ender’s Game seems like obvious franchise fare, unless the box office rallies this weekend, it may be a one-shot endeavor. Hood’s producers weren’t able to finance the shooting of a sequel concurrently with the movie, a pragmatic way of recycling the same same sets and cast. And that blue-eyed boy is not getting any younger. 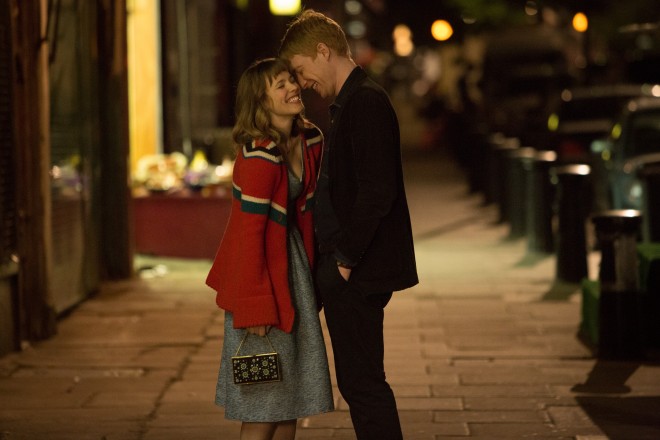 Rachel McAdams and Domhnall Gleeson in 'About Time'

This is somewhat of departure for Richard Curtis, the Brit director of such crowd-pleasing comedies Four Weddings and a Funeral and Love Actually. And not just because its premise hinges on time travel. About Time is not a sci-fi movie at heart, or even a high-concept romcom. Time travel just serves as a handy conceit for a whimsical mood coming-of-age piece, which sets out as a romantic comedy, then sidesteps into a sentimental tale of father-son love bonding.

The story revolves around a law student named Tim, played by Irish actor Domhnall Gleeson, son of Brendan Gleeson—a fresh face, and an engaging presence without a trace of movie star glamour. His father, a retired professor played by the incomparably droll Bill Nighy, sits Tim down on the boy’s 21st birthday to reveal a bizarre secret. All the men in the family have the ability to travel back through time. They go into a closet, focus really hard, and presto! They can’t change history or kill Hitler, Dad explains, but they can go back and tweak their lives by doing things differently, although that’s not usually advisable.

Tim discovers the drawbacks of his power after he meets Mary (Rachel McAdams) and strikes up the kind of  love-at-first-joke chemistry romcoms are based on. But after a time travel incident, he turns out to have not met her at all, then has to use every trick in the time warp book to reboot the budding romance that now never happened.

Winning over Mary is just the first act of a film that has a bigger agenda than mere romance. Which means Canadian sweetheart Rachel McAdams gets short shrift. She has never been more adorable. But the filmmakers seem determined to domesticate her sex appeal, wrapping her in kooky sweaters and cuddly pajamas until she turns into a kind of human tea cosy. And because her character gets slotted into a comfy romance without the luxury of a real crisis, McAdams doesn’t have a lot to do. Which is a sad waste, and an all-too-familiar pattern lately for an actress who deserves better.

As comedy gives way to drama,  the dynamic between father and son has an irresistible undertow of emotion. Nighy is, as always, a delight. He gets to stretch in a wonderfully roomy, shambling role that shows the full measure of his talent. There’s a scene of him playing a spirited game of father-son ping pong, balancing zinging returns with fluid repartee, that’s like a master class in comic timing.

Like Curtis’ previous work, this feels like a crowd pleaser, but on a more intimate scale. In the end, it’s a nostalgia piece, rooted in a casually affluent but arty English family in a lovely seaside home. But even as I was being pulled into the movie’s tidal wash of sentiment, its broad formulaic strokes—so much cruder than Nighy’s deft performance—made me resent the emotions drawn up from the depths. 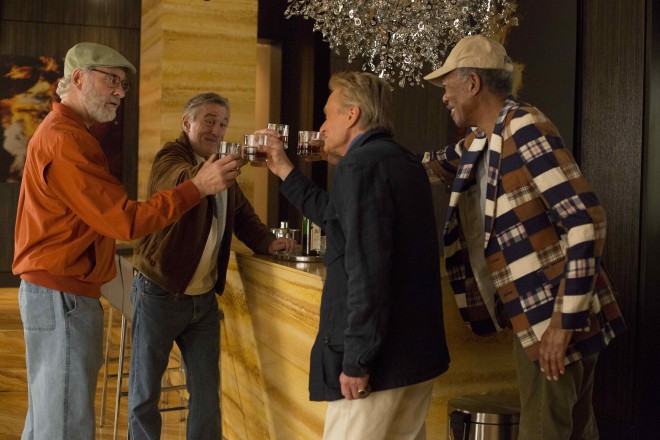 It looks so tantalizing. Four-Oscar winning icons—Robert De Niro, Michael Douglas, Morgan Freeman and Kevin Kline—rolling into Vegas as a geriatric rat pack. Last Vegas is the kind of high-concept movie you’d expect to be pitched with a cocktail napkin scribble in the Polo lounge: The Hangover for seniors. But sadly there’s no bite to the comedy, just flapping gums, as this quartet of Hollywood elders dine out at the all-you-can-eat buffet of scenery chewing.

The movie is not all bad. The first half is passably entertaining, with a sporting dose of self-parody, as four lifelong cronies reunite for one fling. The occasion is a bachelor party. Billy (Douglas), a rich Hollywood lawyer, provides the occasion by finally getting hitched to a woman half his age. Archie (Freeman) is only too happy to escape life in New Jersey with his over-protective son. Sam (Kline), feeling stifled by early retirement, is eager to give his libido a jolt—his wife hands him a greeting card containing a condom, a Viagra pill and a free pass to get laid. But Paddy, a grouch who eats canned soup and drifts around his apartment in a bathrobe mourning the loss of his wife, has to be dragged along.

There’s a fish-out-of water element to the farce as this geezer gang find themselves in a Vegas they barely recognize. But they make themselves at home. Billy and Paddy, former romantic rivals, are both enchanted by a middle-aged cabaret singer (Mary Steenburgen). Sam blithely chats up a transvestite. And Archie makes a small fortune at the blackjack table—after which the casino upgrades the gang to a ridiculously lavish suite. Pretty soon they’re judging wet t-shirt contests and recruiting babes for a giant party.

Directed by Jon Turteltaub (National Treasure, The Kid), and scripted by Dan Fogelman (Crazy, Stupid Love), this shameless all-star fantasy may just be dumb enough to goose the box office where it counts—bored seniors are a growing niche audience, and God knows, they may be craving their own Hangover or Spring Breakers. Actually, a really outrageous elder spin on those templates would be fun. But Last Vegas plays it safe. And as the tone slides from cute to cheesy, the comedy evaporates, to be replaced by enough mawkish sentiment to choke Celine Dion. I’m sure shooting this escapade was loads of fun for the stars. A collective lark and an easy paycheck. But for this critic, a boomer approaching a certain age, it was enough to make me feel embarrassed for my generation.