Do not go to The Big Wedding

De Niro, Sarandon, Keaton ... Williams: How bad could it be? 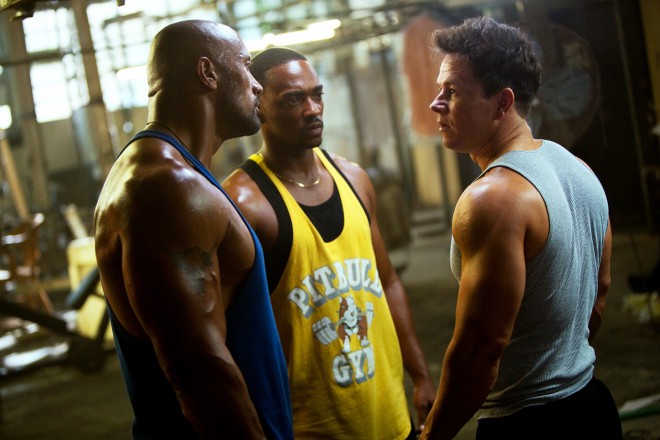 I’ve had an eye infection this week. I’ve been waking up with my eyelids glued shut. No wonder. Given some the movies I’ve been forced to endure lately, my eyeballs are finally saying, “Enough! Enough with the crap!” Can’t say I blame them.

This weekend’s box-office becomes a limbo-style race to the bottom as Pain and Gain and The Big Wedding compete to lower the bar for screwball comedy. And you know the wheels have come off Hollywood when you find yourself enjoying a Michael Bay movie about a trio of dimwit bodybuilders more than an all-star romantic comedy featuring Robert De Niro, Diane Keaton, Susan Sarandon, Robin Williams, Katherine Heigl, Amanda Seyfried and Topher Grace.

With Pain and Gain, Bay, the architect of such monumental shlock as Armageddon, Pearl Harbour and The Transformers franchise, takes a walk on the wild side. Working with a paltry $25 million budget, he is virtually slumming. And he’s made what for him amounts to a personal film, or at least a personal attempt to make the kind of film he hasn’t had time to make while destroying the world. The kind not ruled by robots or special effects.

Pain and Gain is based on a stranger-than-fiction true story from the 1990s, about a trio of Miami personal trainers/bodybuilders who kidnap an affluent client (Tony Shalhoub), torture him for weeks, and force him to sign over all of his wealth. The movie plays as a bipolar mix of sunny farce and black comedy. Our three criminal gym rats—Daniel Lugo (Mark Wahlberg), Paul Doyle (Dwayne Johnson) and Adrian Doorbal (Anthony Mackie) are the Three Stooges of crime. Their epic caper plays out as a comedy of errors that goes from bad to hideous. Before they’re done, these body-building bozos are in the body-disposal biz, shopping for bleach and chain saws at Home Depot.

Bay’s direction is juiced with a kinetic energy, and a grandiose ambition only slightly more outrageous than that of his protagonists. As the narrative hurtles along with a hopped-up narration, you feel Bay is trying to make a Scorsese movie, complete with a pair of vintage Stones songs driving the action. At other times, Bay goes for deadpan farce, and seems to be  trying out-Coen the Coen brothers: the gormless idiot played by Wahlberg, in fact, is weirdly reminiscent of the personal trainer played by Brad Pitt in the Coens’ Burn After Reading. Then at other times, Pain and Gain could be a gross-out comedy from those other brothers, the Farrellys. Or, when it comes to fireballs and the big take-down scene, it could even be a Michael Bay movie. In other words, the tone is all over the place. it’s as if Bay has been let off the leash, and he doesn’t know where to start, or end. Call it No Country for Dumbfellas.

Don’t get me wrong. His enthusiasm is palpable. Pain and Gain has its entertaining moments, and rips along on a tide of gonzo energy and attitude. And as I watched it, my feelings about it would yo-yo back and forth,  as uneven as the film itself. The story is certainly wild enough to hold  attention. The problem is, it never feels plausible. And that’s not because the true events depicted are (as the movie keeps reminding us) stranger than fiction. It’s because the characters don’t ring true. They are movie constructs. You get the sense they are all pretty despicable people. But the actors are working too hard make them more likeable, and dumber, than they could possibly be. Believability cannot be built like muscle mass. And when a real character finally enters the picture—a droll private eye played by Ed Harris—you realize what was missing from the rest of the cast. Bay may be working with humans, but he’s still treating them like robots.

Each of the protagonists is variation on the misguided naif. Wahlberg, as the bone-headed mastermind, is cast as the deluded American Dreamer, who imagines himself as a future Michael Corleone. But his real-life character couldn’t have pulled off half of what he did if he was as stupid as he’s made out be. Mackie is the sad-sack sidekick whose steroid-pummeled manhood doesn’t live up to his delusions of sexual grandeur. Mackie soldiers nobly through a suffocating role. Dwayne Johnson has the most fun, with a story arc that takes him from a gentle-giant Jesus Freak and AA apostle to a Scarface-calibre cokehead. He’s the best thing about the movie, yet he’s seems adrift in Bay’s derby of gags and shocks.

I can see some audiences digging this, though. Like the two guys in front of me who watched while texting on their glowing devices, and whooping like frat boys on March break whenever there was a triumphant pop of violence or a slam-dunk one-liner.

(BTW, if you’re curious to read an interminable account of the what really happened with those bodybuilders, check out this story in the Miami New Times.) 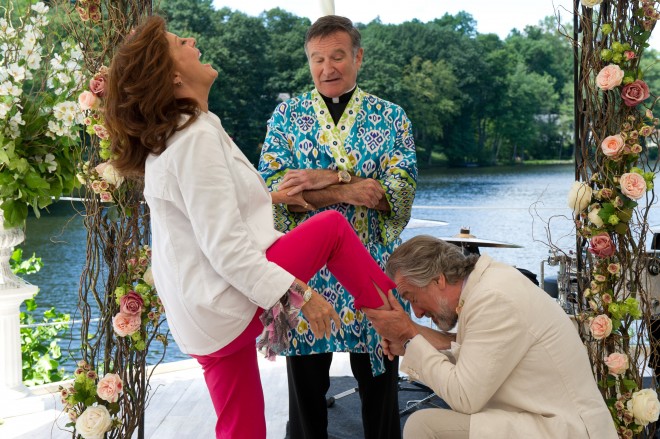 I don’t know where to begin, aside from saying that I find it incomprehensible how such a talented cast can end up making such drivel. Of course, it’s happened before. In fact, it happens more and more these days, as movie stars blithely pay the rent (or whatever it is they pay) by making formula fare, while saving their creative juices for smaller movies that mean something to them. How else can you explain Movie 43?

The set-up sounds promising. A long-divorced couple, Don and Ellie (Robert De Niro and Diane Keaton), are hosting a wedding party for their adopted son. On learning that the boy’s biological mother, a Latina Roman Catholic, would not tolerate divorce, the exes agree to pretend they’re still married, to the consternation of De Niro’s girlfriend, Bebe (Susan Sarandon), who drives off in a huff then ends up catering the wedding with withering sarcasm. The officiating Roman Catholic priest is, for no apparent reason, an effete flake played by Robin Williams, repressing his mugging reflex like a comedian who’s just come out of hibernation and is starved for material. Katherine Heigl, who seems trapped in another movie altogether—an earnest fertility drama commissioned by the Oprah network—is brooding over a Big Secret, which is obvious for eons before it’s Revealed.

This movie doesn’t bear thinking about. Let’s just say no stereotype is left unturned and every gag is telegraphed. Whenever there’s an opportunity for someone to fall into a body of water, it’s taken. Which is a strange way to employ the skills of the actors on hand. As for Diane Keaton’s ludicrous hanky panky with De Niro, who’s cast as a randy sculptor, it makes Keaton’s slapstick tryst with Jack Nicholson in Something’s Got to Give seem almost Shakespearean.

Written and directed by Justin Zackham, The Big Wedding was inspired by the premise of a French film,  Mon frère se marie. The film’s press kit explalins that Zackham “took his story in a different direction thematically with his own wedding experience in the back of his mind. ‘We were ready to elope,’ said Zackham. ‘And then two days before, she said she couldn’t do it because her mom would kill her. We went through hell for the next year and a half preparing for the wedding. People do crazy things around weddings.’ ” And people do crazy things around movies. Zackham, who is 32, also wrote The Bucket List. Clearly, this guy finds old people hilarious.

The Big Wedding is the kind of movie that gives boomers a bad name. You feel disdain for De Niro, Sarandon, Keaton, and Williams, who should all know better by now. And you feel sorry for the young performers, who struggle to make something out of underwritten roles as they share the screen with acting legends for the first time in what will be a train wreck. (Come to think of it, a movie can be a lot like a wedding.)

Most of all, I feel sorry for the people who are going to shell out money to see this because, no matter what I or anyone else says, with all this talent, how bad could it be?

. . . I’d like to go on, but my eyes are begging me to stop. They are screaming: It’s not worth reviewing. Damn. I still don’t feel I’ve nailed what’s so precisely awful about The Big Wedding. Maybe it has something to do with the fact that it was originally called The Wedding. Now that’s a movie I’m sure I would have loved.