Tiding over eager fans of director J.J. Abrams’ next Star Trek installment–which doesn’t premiere until May–is a new app that will allow users to “have unprecedented access to all Star Trek content, as well as the opportunity to participate in missions and win valuable prizes,” according to a Paramount press release. 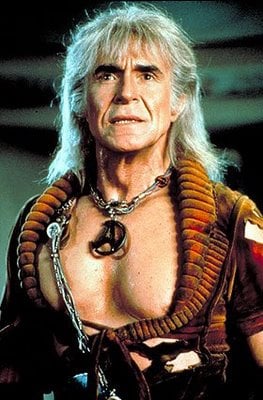 IMdB says that Abrams’ second Star Trek film will have Captain Kirk, played by Chris Pine, leading the crew of the Enterprise on “a manhunt to a war-zone world to capture a one man weapon of mass destruction.”

Who’s the man? Even though Abrams has said the villain’s name is “John Harrison”, it’s rumoured that the “unstoppable force of terror from within their own organization” might be a young Khan. Yes. THAT KHAN. The Khan–played memorably by Ricardo Montalbán–who was Captain Kirk’s nemesis in the 1983 film Star Trek II: The Wrath of Khan.

I can’t even. It’s too much. Can you even imagine? It gets better. This John Harrison, who may actually be Khan, is being played by Benedict Cumberbatch. Yes, the guy who plays Sherlock Holmes in the television series. I know. Believe me. I am counting down the days, too. (It’s 105 days.)

In the meantime, fans can download the free app here.