Who knew CanCon had a special place in the heart of Palm Springs?

With 10 per cent of the population hailing from the True North, there's an enclave of CanCon lovers in California 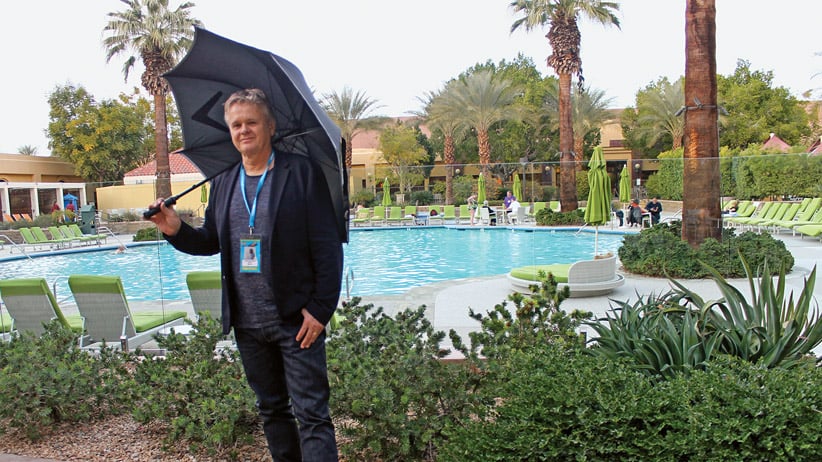 Sturla Gunnarson, director of ‘Monsoon’, at the Renaissance hotel in Palm Springs holding an umbrella. (Photograph by Hadani Ditmars)

It’s somewhat jarring to hear joual in the sleek confines of the Annenberg Theatre in tony Palm Springs, Calif. And even funnier to hear the protagonist of Xavier Dolan’s much-feted film Mommy (played by actress Anne Dorval) complain about les americains who stole her late husband’s invention and ran with it. “They are very good at making money,” she notes in the Québécois film, and her friend agrees, to polite titters from the mainly American crowd.

But it’s not at all surprising to find CanCon at the Palm Springs International Film Festival. The U.S.’s third-largest film festival, spearheaded 26 years ago by then-mayor Sonny Bono, has had Canadian director Darryl Macdonald at its helm since 2003. After working at the international film festivals in Vancouver and Toronto, Helen du Toit began programming at Palm Springs in 2004, before assuming her current role as artistic director in 2008. And with 10 per cent of Palm Springs’ population hailing from the true north, the festival was a natural choice for a partnership with Telefilm that began in 2012. Telefilm’s partnership with the Museum of Modern Art in New York had ended, explains Telefilm’s executive director Carolle Brabant, and “we wanted to still have an event in the U.S. that would showcase Canadian film.”

The festival’s unique position as a world cinema showcase with a large selection of Oscar-shortlisted foreign films held in Hollywood’s backyard, and in the critical pre-Oscar period, makes it attractive for Canadian film-makers looking for distribution. The town of Palm Springs, defined in the early 20th century by its 157-km distance from the gates of Paramount Studios—whose contracts with stars stipulated that they not travel more than 160 km from HQ—has also morphed from a sleepy desert refuge for retirees to an LGBT enclave rich in modernist architecture, upping the festival’s cachet. A kind of cultural oasis in a country where independent theatres are closing down, it also represents, says du Toit, “the single best word of mouth you can buy. People here are evangelical about cinema.”

But “this is not a festival about le cinema,” says Toronto-based director Sturla Gunnarsson, “as much as popular cinema and the nitty-gritty of deal-making.” Gunnarsson’s film Monsoon, a visually stunning journey into the soul of India via the metaphysics of meteorology, had its U.S. premiere here last week; hours after the screening, he was already deep in discussions with an L.A.-based distributor. Besides the novelty of premiering a film about extreme rain in a desert, Gunnarsson chose Palm Springs as his launching pad because it is “essentially an L.A. festival—and it has no real rival in Los Angeles.”

The festival rivals Sundance in the sheer number of Canadian films on offer—there were nine this year, ranging from Denys Arcand’s La Règne de la Beauté, about an affair between a Québécois architect and a young Toronto woman, to Thomas Burstyn’s documentary Some Kind of Love, about two eccentric aging siblings. Gunnarsson sees a common thread. “Canadian cinema is not yet industrial. We still celebrate the singular cinematic voice. We don’t do formula or genre films.”

And yet, as ever, Canada’s relationship with Hollywood hovers close by. The festival opened with the cinematic gravitas of Selma, the movie about Martin Luther King Jr., but the closing film was Boychoir, by Canadian director François Girard. At the red carpet awards gala on the festival’s second night, where Hollywood stars were feted, Canada lurked at the periphery. Reese Witherspoon, who won the chairman’s award, showed a clip of her ﬁlm Wild, by Canadian director Jean-Marc Vallée, and Jason Reitman presented an award to Boyhood. Even one of the scriptwriters for the gala was Canadian, as was the woman who showed this writer to her table at the back of the vast convention centre, seating her between the Argentinian director of Wild Tales and the star of a film from Kyrgyzstan called Queen of the Mountains.

As patrons filed in and out on the red carpet, well-dressed volunteers stood on the sidelines clapping. At the Palm Springs International Film Festival, everyone is a star. Even people who spell theatre this way. And even 157 km from the gates of Paramount.