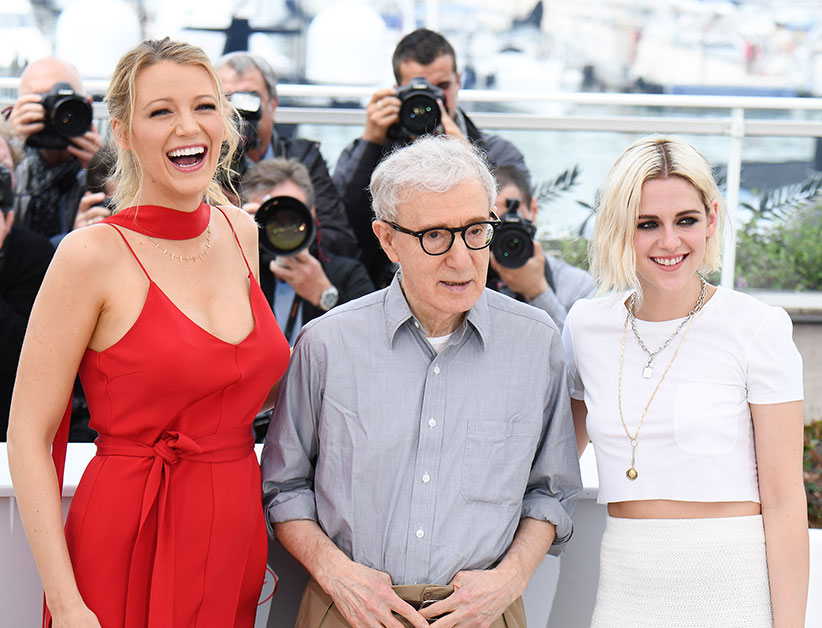 After a press screening of Café Society, the opening night gala, Woody Allen, held court for the media. For someone opening Cannes for a record third time, the 80-year-old icon was remarkably dismissive of the festival’s value as the Olympics of world cinema. Asked why he never allowed his films to show in competition, Allen said, “I don’t believe in competition for artistic things. I love coming to Cannes. But to be in competition is against common sense. For any group to come together and judge the work of other people is something I would never do.”

Fast forward to the opening-day jury press conference two hours later, where just such a group was trying to defend its existence. This is an absurd Cannes ritual in which filmmakers who usually gripe about how much they hate the business of judging art are suddenly moved to justify it. Among the jurors holding court today was Canadian Donald Sutherland, another 80-year-old icon. Wearing a debonair white jacket that made him look right at home on the French Riviera, Sutherland growled, “I’m freezing.” He voiced his outrage over the air-conditioned climate with a tone worthy of President Snow in The Hunger Games. Director George Miller (Mad Max) may be the Cannes jury president, but there’s no question which of the nine-member group you would least want to pick a fight with.

Miller basically said the jury was just a good excuse to see and movies and talk about them with fellow filmmakers. Kirsten Dunst shrugged and explained the practicality of prizes—without the publicity around the them, art films would vanish and actors like her would “just be in big blockbusters all the time.” But Sutherland had the last word about the futility of judgment, as he spun an arcane story from 1936 in which future Chinese Premier Zhou Enlai was asked his opinion of the French Revolution. The response: “It’s too soon to tell.”

Later a Toronto newspaper reporter asked Sutherland if he felt “daunted” judging a movie in competition by Canadian compatriot Xavier Dolan. Our Lion in Winter scowled, said “no” and reminded everyone, “I’m freezing.” Later after other jury members had tossed around the notion of a national cinema, I asked Sutherland if he might share his thoughts about Canada’s national cinema, but said I’d be happy if he just told us another story.

“I kind of gave up talking about Canadian cinema a long time ago,” he sighed, to hearty laughter from a lot of non-Canadians. Then he took the bait. “There’s a very famous story of a British soldier and a French soldier and a Canadian soldier who were captured in the war and sent to be shot by a firing squad. They were given the opportunity to ask for a last wish. The Brit asked for a cup of tea. The Canadian asked for 15 minutes to talk about Canadian identity. And the Frenchman asked to be shot before the Canadian . . . I’m still freezing. Seriously.”

You know there’s something odd about a film festival where Donald Sutherland gets bigger laughs than Woody Allen. 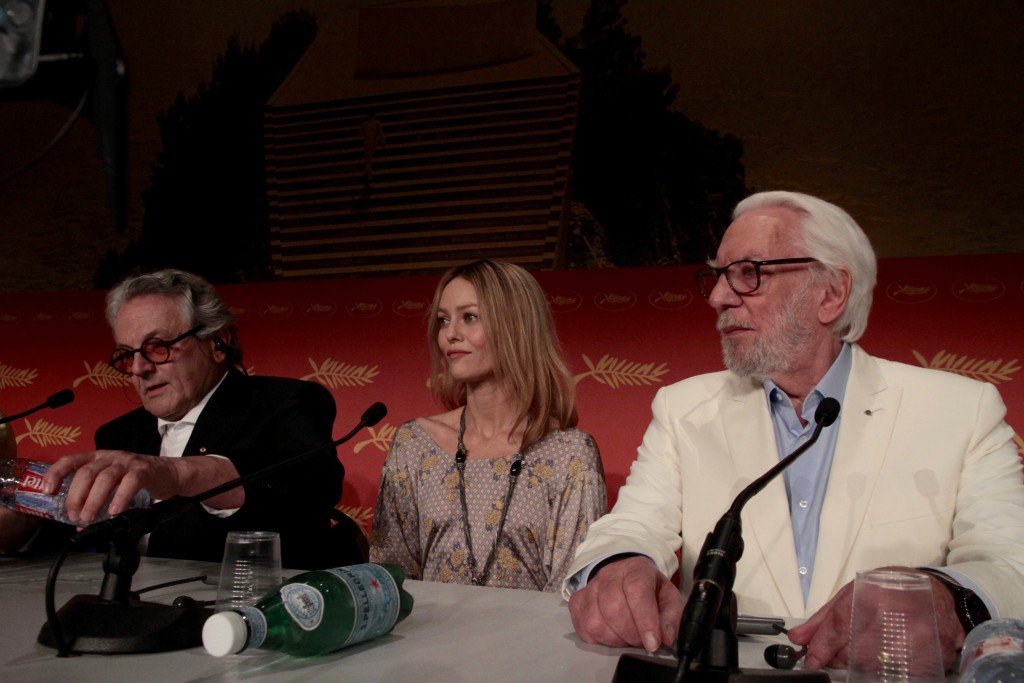 So does Cannes still matter? Well, yes. It remains the world’s most prestigious film festival, and most directors would consider the Palme D’or the only prize in remotely the same league as the Oscar. Of course, Cannes is no longer the springboard for the Academy Awards that it once was, despite The Artist, which won Best Picture in 2011. When a few obvious Oscar contenders failed to land in Cannes this year, notably Oliver Stone’s Snowden, festival director Thierry Frémault was sanguine. “We’d have liked to have it at Cannes,” he told the trade publiciation IndieWire, “but the U.S. producers—who also did Spotlight—want to aim for the Oscars, so for them a Cannes premiere was a little too early.” That’s a startling admission. Frémault seems to have conceded that the one-two punch of the Venice and Toronto festivals in September now launches the Oscar race, not Cannes.

Meanwhile Hollywood still shows up at the Cannes casino. This year a variety of American movies are premiering out of competition: Jodie Foster’s Money Monster (with George Clooney and Julia Roberts), The Nice Guys (Ryan Gosling, Russell Crowe), Hands of Stone (Robert De Niro, Edgar Ramirez), Sean Penn’s The Last Face—and one bona fide blockbuster, Steven Spielberg’s The BFG. As for Allen’s film, it’s another of his late-period postcard romances, though more ambitious than most. An amiable 1930s showbiz fable set between Hollywood and New York, it stars a razor-sharp Steve Carrell, a radiant Kristen Stewart, and Jesse Eisenberg as a deft Woody surrogate. It looks exquisite—this is Allen’s first collaboration with legendary cinematographer Vittorio Storaro, and his first film shot digitally. But it’s a bittersweet legacy act by an old master replaying his greatest tropes. Though Woody orchestrates it without breaking a sweat, his actors are more compelling than his script.

The rest of the Cannes program appears to be more diverse and tantalizing than usual. What am I looking forward to? First off, the Canadian fare. Not because film critics should blindly root for the home team, but because our jobs get more interesting when it does well.

Quebec director Xavier Dolan, in the competition with Juste la fin du monde (It’s Only the End of the World), now merits the oxymoronic tag of “veteran wunderkind”—he’s still only 27 but this is his sixth feature. Two years ago, Dolan came close to winning the Palme D’Or with his Jury Prize (bronze)* win for Mommy. At the time, the competition’s youngest filmmaker made it clear he didn’t appreciate having to split the award with the oldest, Jean-Luc Godard. This year, if his new film is worthy, Dolan should have a good shot. Mommy’s Quebec joual dialogue was so fiercely authentic it required subtitles for French audiences. By contrast, It’s Only the End of the World is based on a French play and stars Oscar-winning French actress Marion Cotillard. Although one can never second-guess the behaviour of the jury, Sutherland’s silver tongue and scary gravitas will make him a forceful advocate of whatever he decides to champion. And the significance of helping to bestow the Palme on a Canadian for the time in Cannes’s history will not be lost on him. On the other hand, Dolan has a lifetime of filmmaking left in him. It’s not a question of whether he’ll win the Palme, just when.
Canada also has features from Montreal and Toronto filmmakers completing in the Directors Fortnight sidebar—respectively Kim Nguyen’s Two Lovers and a Bear, starring Orphan Black‘s Tatiana Maslany, and Nathan Morlando’s Mean Dreams. And while we’re counting up Cancon, Pedro Almodóvar’s Julietta is loosely based on a trio of short stories by the writer known in Cannes as Nobel Prize-winner Alice Munro.

As for the rest of the program, here are a few titles I’m eager to see:

Personal Shopper: Directed by Cannes stalwart Olivier Assayas, Kristen Stewart stars as wardrobe handler for a media celebrity—which sounds not unlike her role as a personal assistant to an actress in Clouds of Sils Maria. In that film the Twilight icon surprised us by acting spontaneous circles around Juliette Binoche. Can’t wait to see what kind of off-kilter number she’ll pull here. Between this and Café Society, she could be Cannes’s It Girl (if that term is still permissible).

American Honey: The film comes from Britain’s Andrea Arnold, one of just three female directors in competition. She steers an uncanny line between high style and visceral realism. After Red Road (2006), Fish Tank (2009) and Wuthering Heights (2011), Arnold makes a break for America with this tale of troubled youth on the road in the Midwest.

La fille inconnue: This is about a female doctor who doesn’t answer her doorbell after closing time, then learns of the death of a young woman nearby. That’s all I know. The less I know in advance about movies in Cannes the better. That’s the whole point of being here. But this film is directed by Belgium’s Dardenne brothers (Rosetta, The Kid With a Bike), whose record is impeccable.

Paterson: Jim Jarmusch and Adam Driver (Girls) are a match made in deadpan heaven. Could Driver be the director’s next Bill Murray?

Gimme Danger: Speaking of Jarmusch, and heavenly matches, he’s also made this feature documentary about Iggy Pop, playing out of competition at a midnight premiere. Gotta love the title, a punk riposte to Gimme Shelter. Iggy Pop posing on the red carpet in Cannes sounds like conceptual art. Maybe he’ll perform? (One year U2 played a three-song set at the top of the red stairs. But they were probably more desperate for attention.)

Neon Demon and Elle: I’ve lumped these together because they’re both wild cards—weird-sounding genre pieces from directors capable of very good and notoriously bad movies. Both films are about women in showbiz.  The former, by Nicholas Winding Refn (Drive, Only God Forgives), involves cannibalism and an aspiring model in L.A. Say no more. Elle, by Paul Verhoeven  (Basic Instinct, Showgirls), is a story of revenge about a female video-game mogul who applies her skills to her love life.

The Nice Guys: Watching Russell Crowe and Ryan Gosling, two of the wiliest tricksters of their generation, compete for laughs sounds like fun. Especially when you take into account that their director is Shane Black, who broke into the business at 26 by writing Lethal Weapon.

The Last Face: The premise sounds a bit earnest—set in Liberia, the story has Javier Bardem playing a relief-aid doctor in love with an aid worker portrayed by Charlize Theron. But I love Sean Penn’s work as a director. Penn and Theron, who were an item during the production, have since split up but will be presenting the film together. The Cannes red carpet heals all wounds.

CORRECTION, May 12, 2016: This story originally claimed that, two years ago, Xavier Dolan split the Grand Prix (silver) with Jean-Luc Godard. In fact, they split the Jury Prize (bronze). Maclean’s regrets the error.