As women fight for equality on screen, the battle is even tougher for those directing the films—though Maren Ade might just challenge for the Palme D'Or 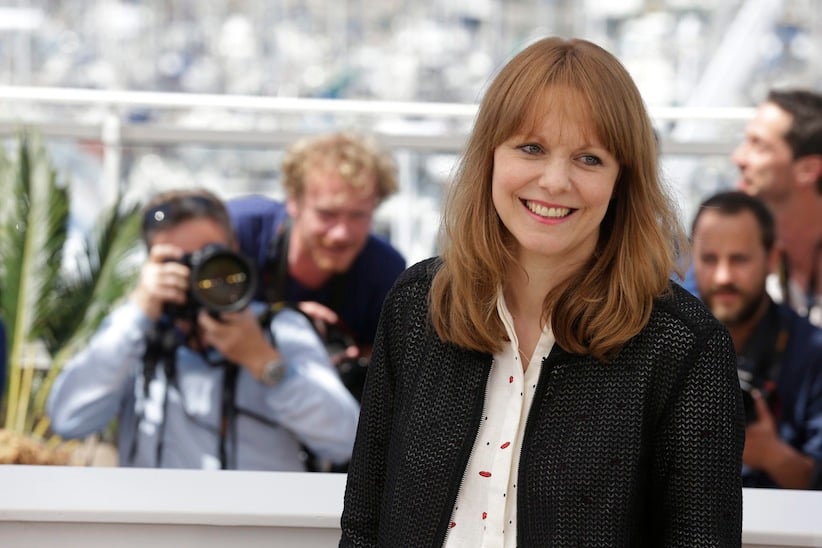 Cherchez la femme, that retro French slogan, has taken on a whole new twist in Cannes. Women have never had trouble finding the spotlight at this, the mother of all film festivals, from actresses on the red carpet to a vintage image of Marilyn Monroe or Faye Dunaway on a festival poster. But finding female directors is another matter. In both 2010 and 2012 there wasn’t a single film made by a woman considered worthy to compete for the Palme D’Or. Last year, there were two. And at the current 69th annual edition of Cannes, among 21 features in the main competition, there are three, still a paltry share. But this year, issues of gender politics have leapt to the fore, with women stirring things up behind the camera, in front of it, and in the conversation.

Although it’s too early to be making Palme d’Or predictions (at the midway point in the festival), one of the competition’s three female-directed movies appears to be one of the most popular contenders so far: Toni Erdmann, a moving and hilarious father-daughter comedy by German filmmaker Maren Ade. Audience reaction to the film went through the roof, with spontaneous eruptions of applause midway through both the press screening and the black-tie premiere. There is even a cautious festival buzz about possibility that Ade could become the second woman in Cannes history to win the Palme, after Jane Campion who won for The Piano in 1993. But winning for a comedy is even rarer in Cannes than at the Oscars, never mind a comedy by a woman.

On the eve of the festival’s opening day, I listened to a male critic scoff at the “indulgence” of two female directors, Ade and Britain’s Andrea Arnold, for having films in competition that are 23/4 hours long—as if they were trying to compensate for their gender’s under-representation. But no one bats an eye (never mind rolls one) when eminent male auteurs routinely show up with heavyweight contenders that clock in close to three hours. In fact, if you’re aiming at the Palme D’Or, it seems de rigeur that size matters given that it’s so easily conflated with gravitas. The late Roger Ebert famously said that “no good movie is too long and no bad movie is short enough.” So true. But I have to hand it to my National Post colleague Chris Knight. As we sat down to watch Arnold’s American Honey, upon noticing that it was framed in the narrow 4:3 format, he said: “It’s long but it’s not wide.”

America Honey is a road movie about a hard-partying crew of teenagers who drive across the American Midwest selling magazine subscriptions door to door. (Apparently such a phenomenon still exists). What’s especially nervy about Arnold’s film is that its epic sprawl is virtually plotless. Its handheld style and reckless energy of sex, drugs and rock’n’roll are reminiscent of Spring Breakers. But Arnold didn’t hire any known actors, aside from Shia LaBeouf (who seems bent on immolating his own stardom). Instead, to cast 11 of the 15 crew she found young recruits with no acting experience. And for the film’s starring role, a dumpster-diving runaway, she recruited a girl named Sasha Lane after spotting her on a Florida beach during spring break. The film’s style is equally audacious. With music driving the scenes, Arnold doesn’t direct so much as deejay the action. Much of the time her outsider heroine just observes around the perimeter as the camera tries to parse her silence in lingering close-ups. Consider it a counterintuitive kind of female empowerment.

Ade’s German comedy follows a far more conventional structure, but she subverts one trope after another with a playful eye on gender politics. Toni Erdmann is about a high-strung career woman (Sandra Hüller) struggling to fit into the male executive class. While working on a project in Bucharest, she’s fallen out of touch with her father (Peter Simonischek), who pays his daughter a surprise visit. Not only won’t he go home when asked, but he begins stalking her in a goofy disguise, donning an alter ego as a clowning hustler named Toni Erdmann. After so many Hollywood movies about workaholic fathers who come to realize they’ve neglected their sons, it’s more than refreshing to see a story of a workaholic daughter who has neglected her dad.

Ade’s shrewdly observed comedy of manners lays bare sexism in the workplace, and the cocktail bar, without a whiff of preaching. “I never intended to do something critical of sexism in the business world,” the director said in an interview. “I merely wanted to show things the way they are, and sexism is part of that. The whole gender issue actually kind of gets on my nerves, especially when it’s given so much weight.” Ade’s heroine, in fact, has internalized the sexism of her colleagues so thoroughly that when she finally begins to break out of her shell, the payoff is explosive—and worth the long wait. As the comedy kicks into high gear, it ambushes the audience with a series of hysterical moments. One is a diabolical sex scene—our heroine disarms her coworker’s seduction plan by commanding him to take care of himself, and aim for the petit fours he ordered from room service. And the piece de résistance, which I don’t dare spoil, is arguably the most original, outrageous and screamingly funny nude scene you will ever see. 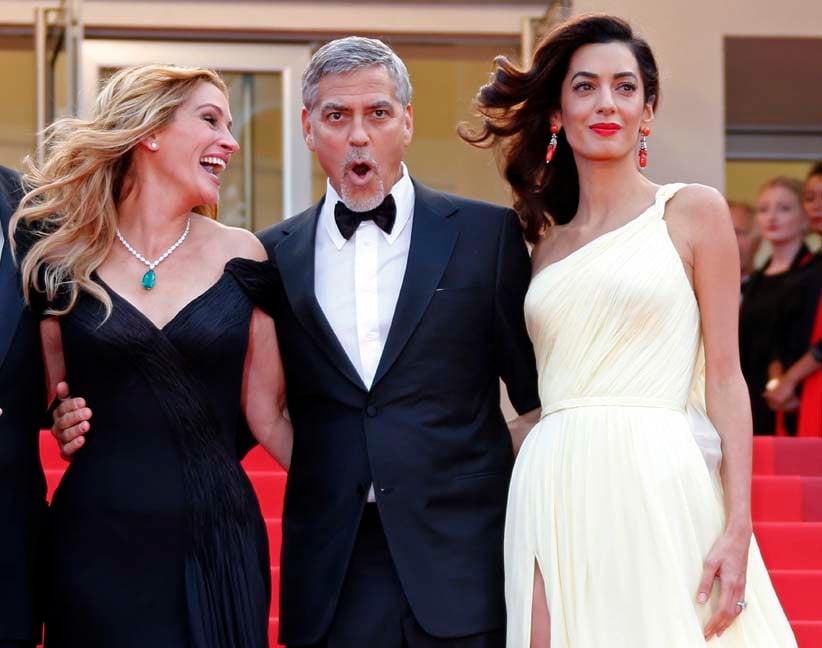 Cast members Julia Roberts, George Clooney and his wife Amal Alamuddin pose on the red carpet as they arrive for the screening of the film “Money Monster” out of competition at the 69th Cannes Film Festival in Cannes, France, May 12, 2016. (Jean-Paul Pelissier/Reuters)

The most famous female director in Cannes is Jodie Foster. Braving the red carpet for the first time since she was here with Taxi Driver 40 years ago (it won the Palme D’Or), she was on hand to premiere Money Monster out of competition. This satirical Hollywood thriller, about the hostage-taking of a TV investment guru played by George Clooney, is not what you’d call a woman’s film. The male leads do all the narrative heavy-lifting. But the smartest character in the room is an unusually sharp Julia Roberts, as the producer whose voice is in Clooney’s ear.

The film was ostensibly about the moral bankruptcy of TV news. But in trying to strengthen the female roles, says Foster, “we stumbled across the fact that we’d made a movie about men struggling with their sense of failure.” Speaking at a press conference, she added, “They have such a bad opinion about themselves that they’re looking for values of celebrity and money to give them meaning.” When I got up to ask George Clooney how he could relate to playing a small-time celebrity blinded by his own ego, the actor first jumped on the defensive, oddly spelling out that his own behaviour as a celebrity bore no resemblance to his character’s. “He’s closer to the characters I’ve played in the Coen brothers’ movies,” he said, “where you think you’re the smartest person in the room when you’re actually the stupidest person in the room.”

In Cannes, it’s not just the movies directed by women that are showing a recalibration of cinema’s gender balance. Ten out of 21 the features in competition have stories driven by a female lead. They range from Personal Shopper, starring Kristen Stewart as a young American in Paris, to Mademoiselle, a lesbian revenge drama set in 1930s Korea. Among the films, female roles have some real weight. Take I, Daniel Blake, Ken Loach’s superb comic drama about a carpenter on disability at war with Britain’s welfare bureaucracy. The title character is clearly the main focus. But the impoverished single mother that he takes under his wing more than holds her own.

And when male and female leads are evenly matched, the results can be potent. Jeff Nichols’s Loving, a clear Oscar contender, tells the true story of a mixed-race Virginia couple fighting for the right to be married. As the slow-burn narrative progresses, the focus subtly shifts from the white husband to the black wife, who takes the initiative in pushing their case to the U.S. Supreme Court.

Something similar happens in the thriller Mean Dreams, which Toronto director Nathan Morlando premiered to a standing ovation in the Directors’ Fortnight series. It’s a tale of two sweethearts on the run from killer cops. For much of the story, the impetuous boy thinks he’s in charge, a man of action coming of age, but the role of protagonist inevitably slides over to the girl-next-door he’s trying to “save.”

Meanwhile, outside the cinemas in Cannes, women have been opening fire on Hollywood. A trio of Oscar winners—Foster, Susan Sarandon and Juliette Binoche—spoke out on in a series of “Women in Motion” talks. Binoche recalled that she had berated both Steven Spielberg and Martin Scorsese for their failure to focus movies on female characters. She said that she turned down a part in Spielberg’s Jurassic Park. “Saying no to certain films is as important as saying yes, because it really defines you,” she said. “I’ve been refusing roles instinctively out of the need to talk about the feminine. The feminine has to have its place. It needs space, and we don’t have the space, so we have to take it.”

As for Scorsese, Binoche suggested that “he has a very feminine side,” but doesn’t explore it in his work. Who knows? If the Ghostbusters can be gals, maybe gangsters are next.