As a blood-sucking capitalist in search of his soul, Robert Pattinson is more undead than the vampire in 'Twilight' 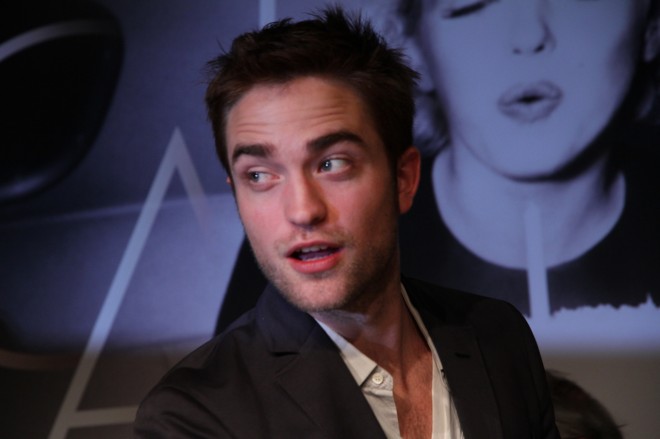 David Cronenberg never fails to surprise us. This morning in Cannes, we saw Cosmopolis, his keenly awaited adaptation of Don DeLillo’s 2003 novel—a 24-hour odyssey starring Twilight‘s Robert Pattinson as a Eric Packer, billionaire playboy who cruises Manhattan in a limo, looking for a haircut as riots erupt in the streets and his wealth evaporates in the twinkling of a bad gamble on Asian currency.

But we knew that before going in. Here’s what we weren’t expecting.

This is a road movie that barely moves. Most of it takes place inside an opulent white stretch limo, which crawls through the clogged streets like an urban space capsule. It’s a vehicle of stopped time. Outside rioters rock the car, paint it with graffiti and bounce off the windshield, but inside it’s so eerily silent that the commotion barely registers. The car has been “Prousted,” insulated with cork—a DeLillo detail that Cronenberg has taken to heart. Although the dialogue rarely lets up, this is one of the quietest films I’ve ever seen. It’s like a submarine movie. In fact at the press conference following the morning screening, Cronenberg referenced the German U-boat classic Das Boot.

He also recalled with perverse glee that his sound editors worried the movie was too quiet, and kept asking if he didn’t want more noise bleeding into the limo from the street. But no, he wanted to keep it Proustian. Which is disorienting, because we’re not used to watching movies without being manipulated by prominent sound design. Even The Artist, with its brash, driving score, seemed louder than Cosmopolis. 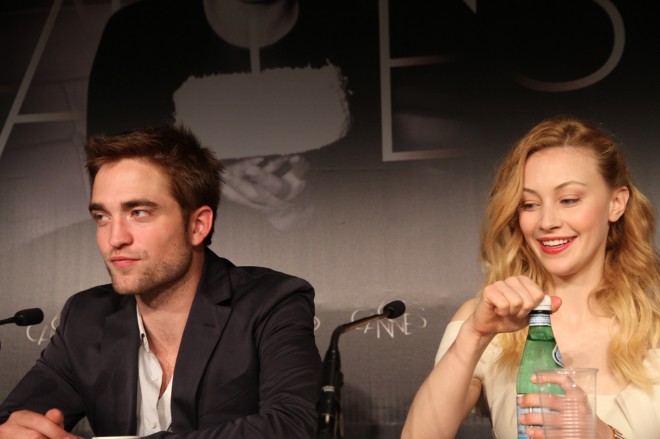 That said, the characters never stop talking. Just as we spend much of the movie confined to the hermetic world of the limo, we’re also locked in wall-to-wall discourse—about sex, death and capitalism. This is the most talkative, and the most explicitly political, movie Cronenberg has made. To write the script—which he says he finished in a record six days—he simply stripped the dialogue out of DeLillo’s novel and left much of it intact. DeLillo, who attended the press conference, said he didn’t touch the screenplay. He didn’t need to. Few authors get to see so many of their words survive the leap from page to screen. DeLillo expected Cronenberg to take more of the limo scenes outside—the way a filmmaker takes a play outdoors. But he said the opposite happened. Cronenberg actually moved one of his outside scenes into the limo. Set in Manhattan, the film was shot in Toronto, without the usual token second-unit establishing shots of New York. The outside world is at such a remove it doesn’t matter. The limousine is one man’s psychological space; a stretched world that’s so slow and immersive you can imagine it could have been well-served by 3D.

Pattinson, who is in every scene, holds court with chilly neutrality. As a cold-blooded capitalist searching the universe for some palpable proof of his own existence, he’s more undead than the vampire in Twilight. Before the press conference, the moderator asked us to steer clear of questions about vampires. But given that Pattinson has been cast as a kind of corporate vampire, I thought it was legitimate to ask how he and his director dealt with all that iconic baggage. As I expected, Cronenberg did his best to dispel Twilight‘s shadow.

“It’s very easy to say his character is a vampire or a werewolf of Wall Street,” he replied. “But an actor cannot play an abstract concept. He’s a real person with a history and a past. And the history and the past is not Twilight, it’s Cosmopolis. You must ignore the baggage. You know it exists but you are creating a new thing, an original thing.”

Pattinson, who shoulders a huge role, said that before the shoot “I spent two weeks worrying. I went around to his [Cronenberg’s] house and I think you said, ‘It doesn’t really matter. Let’s just start and something will happen.’ ” The actor added, “It’s impossible to approach this as you would a normal character. I didn’t want to change a single word, even the punctuation. That made it quite easy. It’s like you’re doing a song instead of a movie . . . Actors aren’t supposed to be intelligent.”

Cronenberg picked up the music analogy, saying, “It’s like you’re doing a version of a Bob Dylan song. Everybody knows the words; you’re not going to change the words. But it still gives you a lot of creative scope, with the rhythm, the orchestration, the vocalization, what register you’re playing in. That’s how I approached Don’s dialogue, like Shakespeare or Harold Pinter, not messing with the rhythms—such beautiful, specific rhythms you find in all of Don’s novels. I didn’t want anybody to mess with that. Yet each person who comes into the limo is an additional singer in the choir with his or her own voice.”

Canadian actress Emily Hampshire noted that she and the other supporting players were all in their own “mini-movie” and didn’t cross paths onscreen. And as each tries to lift DeLillo’s dialogue off the page, it’s interesting to see how the various cast members rise to the challenge. They include Juliette Binoche slithering around the floor of the limo, an exasperated Jay Baruchel talking to Packer is if trying to get through to an alien; Hampshire sweating from a jog in the park and impudently holding her own; Sarah Gadon as Packer’s new super-rich wife cooly evaluating her marital investment—and in the crowning performance, Paul Giamatti as a deranged ex-employee engaging in a 22-minute “duet” of dialogue with Packer, an end game that becomes its own intense chamber piece.

Hard to say yet what the impact of Cosmopolis will be on the Cannes jury, and the world. From a random sampling of people I talked to, some were underwhelmed, many liked the film, but I met no one who was blown away. Then again, Cosmopolis, which is as cerebral as Cronenberg’s early work is visceral, is not that kind of picture. As for me, I’m still turning the movie around in my mind, and already feel compelled to see it again before I slip my opinion into park.