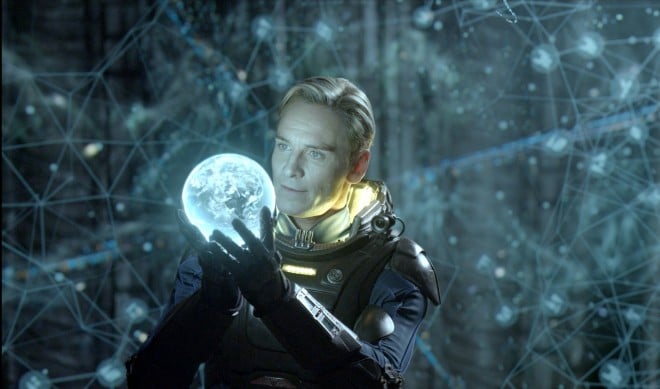 The Greek economy may be failing, but the Greek language has never had such cachet, at least at the movies. This week marks the Canadian release of Cosmopolis and Prometheus—two films that have more in common than just the Hellenic ring of their titles. Both are slow-boat odysseys to nowhere aboard luxuriously insulated crafts that get stalled in hostile, deeply misunderstood environments. In Cosmopolis, a billionaire’s white stretch limo idles in Manhattan gridlock as anti-capitalist rioters roll off  the windshield. In Prometheus, a space ship sits parked on an alien planet, as tomb raiders muck around in a mass grave that doesn’t like to be poked. 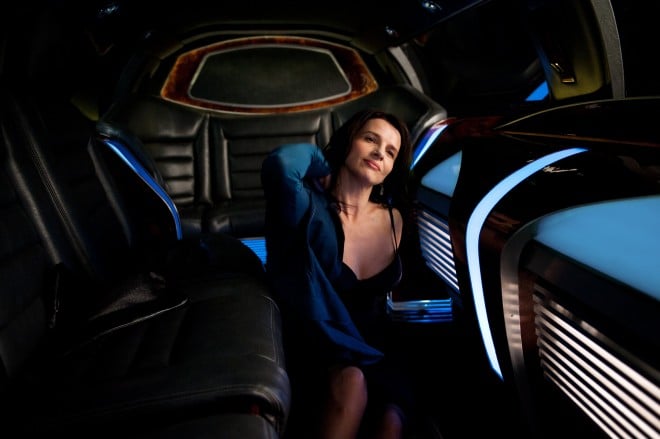 Talk about an unfair fight at the box office. These are two pictures made on a vastly different scale. David Cronenbeg’s Cosmopolis is a Canada-France co-production shot for one tenth the budget of Sir Ridley Scott’s Prometheus, a 3D studio blockbuster that cost about $200 million. Yet they feel weirdly akin. Both stories are driven by entitled analysts who venture into the heart of darkness, coolly examining barbaric forces that are intent on destroying them. Unlike Prometheus, Cosmopolis is not science fiction, but its rarefied atmosphere is at least as strange, and claustrophobic, as the air-locked interiors of Scott’s space opera. Also, Scott owes a certain debt to Cronenberg’s legacy of biological horror. Prometheus is a lavish reboot of the Alien franchise, whose core concept—a vicious parasite erupting from the flesh—was pioneered by Cronenberg in Shivers four years before Scott directed the original Alien in 1979.

Prometheus revives the moribund Alien legacy with impressive verve, although it’s an independent property, with no overlapping characters. Scott built his reputation on science fiction, but hasn’t made a sci-fi movie since 1982’s Blade Runner. Here he seems to be making up for lost time with a spectacle that pulls out all the stops, and leaves no trope unturned. Prometheus is an extravagant pastiche, an epic that starts out weaving elegant DNA strands from 2001: A Space Odyssey and Lawrence of Arabia, that eventually culminates in an intestinal orgy of slithering demons. Cronenberg, meanwhile, seems to be voyaging away from the viscera that made him famous, as he ventures into the deep space of ideas and intellectual discourse. Last year, he gave us A Dangerous Method, a stately period piece that plumbed the psychoanalytic divide between Jung and Freud. With Cosmopolis, moving from Freud to Marx, he strip-mines brainy dialogue from Don DeLillo’s Ulyssean novel to forge a dramatic essay that personifies the existential crisis of capitalism.

I already spilled a fair amount of digital ink on Cosmopolis at the time of its Cannes premiere. I’ll reprise that response, and elaborate on it, in a minute. But first let’s take a look at Sir Ridley’s monster mash-up.

Prometheus launches its narrative with a cosmic license reminiscent of The Tree of Life. A swooping helicopter shot zooms down canyons, dotes on waterfalls, plunges into a cave on Scotland’s Isle of Skye, then dives into a microscopic dance of double-helix molecules: ancestral genetics. The year is 2093. A pair of scientists in the cave— Shaw (Noomi Rapace) and Holloway (Logan Marshall-Green)—have discovered ancient pictographs that suggest mankind’s earliest ancestors were not from this planet. Next thing you know they’re waking up from two years of hibernaton on a space craft named Prometheus, travelling to the planet they believe is our ancestral home. And before you can say Indiana Jones, they’re in the field, digging for evidence of humanity’s origins in a massive and mysterious alien tomb. A certain naiveté goes with the turf, expressed in lines like “Do we have any idea what is oozing out of these vases?” This is the space equivalent of going down to the basement in a horror movie. These scientists may be brilliant, but we’re smarter; after all, we’ve seen the other Alien movies, and they haven’t.

The space craft’s crew are a rich ensemble, with two strong female protagonists at the helm. It’s as if they’ve split Sigourney Weaver’s Alien-atrix into two characters.  Rapace is our heroine, an intrepid scientist/warrior who has all tenacity of her Girl With the Dragon Tattoo avenger, but with warmth in her heart and a crucifix at her clavicle. Charlize Theron holds the fort as a cold-blooded executive named Vickers, who represents the corporation sponsoring the expedition. (Theron seems to have usurped Sharon Stone’s mantle as Hollywood’s resident ice queen—first she’s the psychopathic queen in Snow White and the Huntsman, now she’s a mercenary space bitch.) Idris Elba (American Gangster) serves as the ship’s captain, a no-nonsense commander who takes a dim view of the expedition’s field trips, and has a knack for saying what the audience thinks.

But the most compelling character is David, the ship’s robot, played by Michael Fassbender as a hybrid of Hal from 2001: A Space Odyssey and Peter O’Toole in Lawrence of Arabia. The O’Toole reference is very deliberate. David loves watching Lawrence of Arabia and is modelled on its hero, right down to the haircut.

Between the trippy visuals and strong characters, Scott spins an engrossing yarn. But the story is as messy and convoluted as the serpentine creatures that inevitably uncoil from the alien crypt. Scott’s narrative strategy seems to be: include everything. And as he  cranks up the action with a succession of gut-wrenching climaxes, the movie suffers from overkill. This is the classic flaw of a filmmaker who has enough power, money and digital effects to do whatever he wants. He doesn’t know when to stop. It’s the cinematic equivalent to an invading army that unleashes all its entire arsenal of firepower simply because it can. In that sense, Ridley Scott is Prometheus, a Hollywood Titan who steals fire from the gods to create a world of men and monsters. But instead of being punished by being tied to a rock and having his liver eaten by an eagle, he’s likely be richly rewarded at the box office. 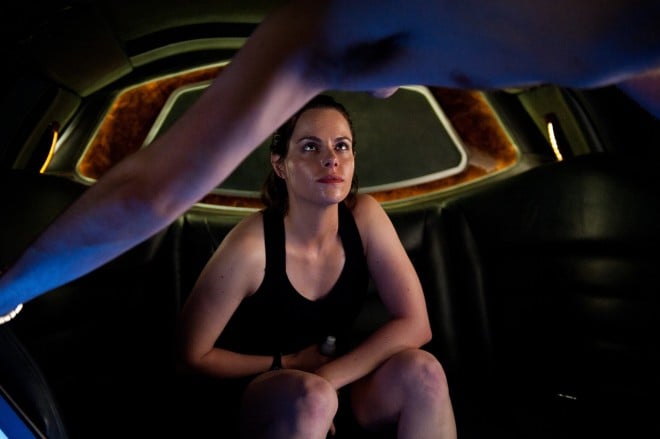 Cosmopolis is more modest in scale, yet more ambitious artistically. It’s a 24-hour odyssey starring Twilight‘s Robert Pattinson as Eric Packer, a billionaire playboy who cruises Manhattan in a limo, trying to get a haircut, as riots erupt in the streets and a bad gamble on Asian currency vaporizes his fortune. This is a road movie that barely moves. Most of it takes place inside an opulent white stretch limo, which crawls through gridlock like an urban space capsule. It’s a vehicle of stopped time. Outside the windows, rioters rock the car and paint it with graffiti, but inside it’s so eerily silent that the commotion barely registers. The car has been “Prousted,” insulated with cork—a DeLillo detail that Cronenberg has taken to heart. Although the dialogue rarely lets up, this is one of the quietest films I’ve ever seen. It’s a submarine movie on wheels.

Ever since catching Cosmopolis at an early morning screening in Cannes, I’m still wondering exactly what to make of it. So I’ve been dying to see it again. A family crisis prevented me from attending the Toronto premiere earlier this week, so I’ll just have to wait. But I’m in good company. A cast member had a similar reaction. Interviewed in Cannes, Sarah Gadon told me that after first seeing the film,  “I was frustrated, because I’d watched the trailer and thought we’d made an American Psycho film that’s really sexy and rock ’n’ roll.” But after seeing it a second time, at the Cannes premiere, she realized “the dialogue is Brechtian—it’s meant to alienate the spectator.” And in a line that didn’t make it into my article, she went on to say, “David is a master filmmaker. If he wanted to lead you emotionally into the subject matter, he would have done that.”

Whether or not Cronenberg was deliberately chilling our emotions with Brecht’s “alienation affect,” he certainly violates film conventions left and right. The movie is set in Manhattan, and filmed in Toronto, without the usual second-unit establishing shots of the real New York, and with little attempt to hide Toronto landmarks. Then there’s the sound. As I noted above, the background audio is so hushed it feels unnatural—we’re used to movies artificially manipulating our sense of what’s “natural” with prominent sound design. Instead, Cronenberg bombards us with dialogue. And because he lifted much of it straight from DeLillo’s novel, it sounds “written,” and is not always convincing. Smart, sophisticated dialogue requires actors with serious talent to lift it off the page. Just ask Shakespeare. That puts tremendous pressure on Pattinson, who sits at the hub of the drama and figures in every scene. Whether by default or design, his delivery is consistently flat. Yet his presence is strong: the camera finds a wealth of intrigue in his  blue-eyed, unblinking gaze. Holding court with chilly neutrality—a cold-blooded capitalist scanning the universe for some palpable proof of his own existence—he’s more undead than the vampire in Twilight.

Most of Cronenberg’s cast rise to the challenge of single-scene performances as they take turns stepping in and out of Packer’s cork-lined cosmos. The drama plays out like an episodic series of auditions—culminating in a 22-minute showdown between Packer and Benno Levin (Paul Giammati), a crazed ex-employee who has been stalking him. Jay Baruchel is wonderfully manic as a technology expert who treats Packer as if he’s insane. Juliette Binoche drops by for a sexual interlude, writhing around the floor of the limo like a delirious pole dancer. Packer blithely receives a prostate exam from his doctor while interviewing his exasperated finance chief (Emily Hampshire), who’s just come in from a jog and is sweating all over his leather upholstery. Emily Mortimer lets rip with a turn as an eloquent theorist and knocks it out of the park. Matthieu Almaric unleashes a brief, funny cameo as a pie-throwing “pastry assassin.” Kevin Durand rides shotgun as Packer’s phlegmatic head of security. And Sarah Gadon out-chills Pattinson in the role of his disenchanted bride, a rich girl who’s ready to leave him after two weeks of a marriage that’s been arranged as a merger.

Cronenberg’s usual suspects lend style to the picture—from composer Howard Shore, whose brooding score is dialed down to a background hum, to cinematographer Peter Suschitzky, who imparts a glassy air of clinical luxury to every frame. In some ways, the film’s cold satire is reminiscent of Cronenberg’s Crash, another movie with an automotive fetish. But this is a more cerebral piece, not inflamed by outrageous crimes of the flesh. Like Packer’s limo—which crawls through Manhattan, slowed by a presidential motorcade and a rioting populace—Cosmopolis makes a narcotic virtue of inertia. Dramatically, we pay the price. But in a world of movie-going that has us addicted to frantic noise and stimulus, this thoughtful provocation is as “Cronenbergian” as anything the director has thrown at us.