Déjà vu: 'Oz The Great and Powerful' and 'Dead Man Down' 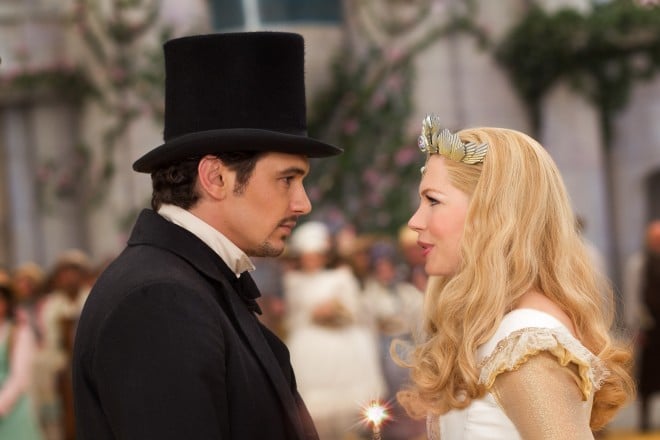 The prequel—that miracle of reverse-engineering that Hollywood uses to reboot everything from Batman to Bond, from Star Wars to Star Trek—has now been applied to one of cinema’s most cherished classics, The Wizard of Oz. And it’s impossible to approach this movie without  a measure of skepticism—the notion of Disney refurbishing Oz as its own Magic Kingdom, with James Franco starring as the would-be wizard. We can take some solace in the fact that Oz the Great and Powerful does not crudely cannibalize the 1939 movie, or the famous story by L. Frank Baum—none of its major characters make an appearance. Directed by Sam Raimi (Spider-Man) and scripted by Mitchell Kapner and  David Lindsay-Abaire, this 3D spectacle is a relatively original contraption, tricked out with some novel touches of ingenuity and wit.

But weighing in at 130 minutes, Oz the Great and Powerful is as cumbersome and overwrought as its title. Sandwiched between an inventive first act and a rousing finale is a long march down a yellow-brick road of plodding narrative. Perhaps I was tired to begin with, but I got so sleepy I felt I’d been dragged through Oz’s opium poppy fields. Or perhaps I was just experiencing an aversion to the movie’s deeply generic template. Driven by a trio of witches, much of the action resembles the same CGI duels between Good vs Evil that we’ve seen in every other blockbuster fantasy, from Harry Potter to Twilight—a contest of high-flying superdemons swooping around computer-generated landscapes hurling blue lightning bolts and great balls of fire. And don’t get me started on the story, an old-school witch hunt that sends Disney’s pro-princess sexual politics back to the Stone Age.

The movie does, however, open with a promise of ingenuity and class. After the titles unfold as a sequence of antique 3D dioramas, the first act is presented in square-framed black and white, an homage to the monochrome/colour transition in The Wizard of Oz. For a while, we wonder if we’re going to see something on a par with Scorsese’s Hugo. We meet Oz (Franco) is a desperate circus magician performing in a circus sideshow in Kansas. After pulling off a levitation trick, the crowd turns on him when he can’t cure a crippled girl. As he flees in a hot air balloon, he’s swept up by a tornado and transported to Oz. There, in a classic case of mistaken identity, this shambling magician is proclaimed as a long-awaited savior, the Wizard of prophecy who will kill the wicked witch and return the Emerald City to the citizens of Oz. Charlatan that he is, Oz is happy to impersonate the wizard and bluff his way to riches. There’s even a Scrooge-McDuck scene of him diving into the Emerald City’s vault of gold coinage. And when it comes to fighting the wicked witch, this charming scoundrel has heroism thrust upon him. Pulling out his magician’s bag of tricks, and one of Edison’s inventions, he uses good ol’ American sleight-of-hand to defeat the witch’s evil magic literally with smoke and mirrors.

There are, in fact, three witches competing in a scenario that amounts to a cosmic catfight. Two of them are wicked: the dark and alluring Evanora (Rachel Weisz), who transforms her dark and alluring sister, Theodora (Mila Kunis), into an old hag—a horrific moment that’s enough to convince any child  there is nothing more terrifying in a woman than old age. The third witch, who becomes Oz’s ally, is the blond and beatific Glinda (Michelle Williams), who is as pure as the driven snow, and almost as passive.  Oz has his only emotional moment with a broken china doll, who gratefully lets him glue her legs back on. But all the girls take a back seat to his master-slave bond with a droll flying monkey (Zach Braff).

Of the three actresses portraying the witches, Weisz is the only one who emerges with her dignity as a stylish femme fatale. Kunis is trapped in a hideous role, and as the perfect princess Williams has never been more sadly wasted. The movie, meanwhile,  belongs to Franco, who acquits himself with panache as a playful trickster discovering the power of showbiz to generate mass delusion.

In that sense, he’s the surrogate for the film’s own enterprise. While this bizarre confection seems to yearn for the naive stereotypes of vintage Disney, it’s cut from a more cynical contemporary mold. If the computer-generated landscape looks familiar, that may be because it was designed by Robert Stromberg, the Oscar-winning art director of both Avatar and Disney’s Alice in Wonderland. If we feel a sense of déjà vu, it’s not just because we’ve seen The Wizard of Oz.

A line near end of the film suggests we’re witnessing the birth of a franchise: “When those witches come back—and they will come back—we’re going to need you!” Oz the Great and Powerful, as it turns out, may owe less to The Wizard of Oz than to Pirates of the Caribbean, another Disney property in which an anti-heroic rascal cons his way through thick and thin while taking on a mythic array of supernatural monsters. Behind the small-time magician played by Franco is a machine of great and powerful studio wizardry.

And was it just my imagination, or do those castle towers in this movie’s Oz bear an uncanny resemblance to Disney’s Magic Kingdom? Fears of Big Bad Disney plundering Oz, and re-branding it in its own image, may not be unfounded after all. 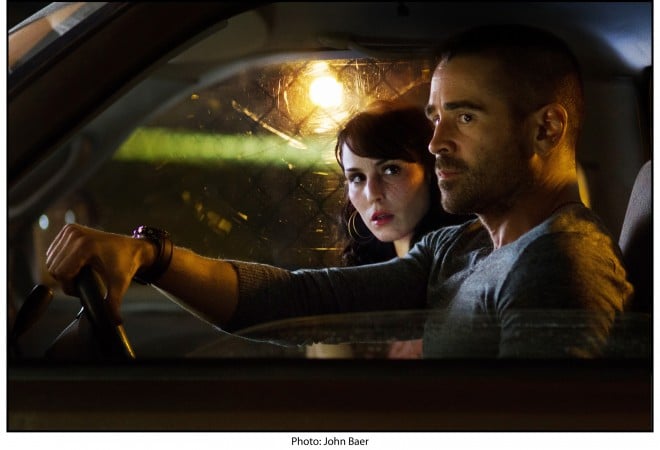 Dead Man Down offers a different kind of déjà vu: Noomi Rapace, the original Girl With the Dragon Tattoo, plays another woman bent on vengeance, an ex-beautician whose a face is tattooed by scars from facial reconstructive surgery after she was hit by a drunk driver. The movie, in fact, comes from Danish filmmaker Niels Arden Oplev, who directed Rapace in the original Swedish adaptation of The Girl With the Dragon Tattoo. Marking Oplev’s Hollywood debut, Dead Man Down is a drama of double vengeance. While Beatrice (Rapace) is bent on killing the drunk driver who ruined her face, Victor (Colin Farrell) is engaged in a more mysterious mission of revenge, as a gangster who has infiltrated a criminal empire with the sole intent of making its kingpin, Alphonse (Terrence Howard) pay for a crime that destroyed his life.

Victor and Beatrice meet as shy neighbours exchanging glances from the windows of two high rise housing complexes in New York City. Beatrice lives with her mother (Isabelle Huppert), who is desperately trying to set her up with a man. Victor seems nice enough; you’d never guess such a shy guy is obsessed with killing. Beatrice sees him as an opportunity. Having witnessed him commit a murder, she blackmails him into becoming her hitman, while unaware of his own covert mission. And their dual missions become entangled—curdled in fact—romance simmers on the back burner.

A gnarled intrigue book-ended by a couple of full-tilt action scenes, the drama has a wildly uneven tone. The movie can’t make up its mind what it wants to be. There too many balls in the air, and the dialogue lurches through some very clunky moments. But none of this is the fault of the actors, who are both a pleasure to watch. Rapace is one of those performers you just can’t take your eyes off. Whenever she’s onscreen, the movie that surrounds her just seems to stop in tracks. And Farrell shows again that he is one of Hollywood most underrated actors, perhaps because he’s so consistently understated, whether doing comedy or drama. Here he has a wonderfully haunted quality, especially in silence. He plays a Hungarian, but in those Irish eyes, you can see endless depths of sorrow.

Even though Oplev’s narrative direction lacks consistency, but he has a terrific eye: every frame is visually arresting. Shot on location in New York, Dead Man Down strives, successfully, for the gritty vérité look of ’70s American cinema. And the city emerges as a character in a way we rarely see today.

So we watch Rapace, a Swede playing a French woman, and Farrell, an Irishman playing a Hungarian who passes himself of as a Yank, in movie about New York gangsters led by an enigmatic black dude named Alphonse. Together these volatile elements achieve an unlikely chemistry, even if they refuse to cohere.