Dinner with Harvey Weinstein and friends 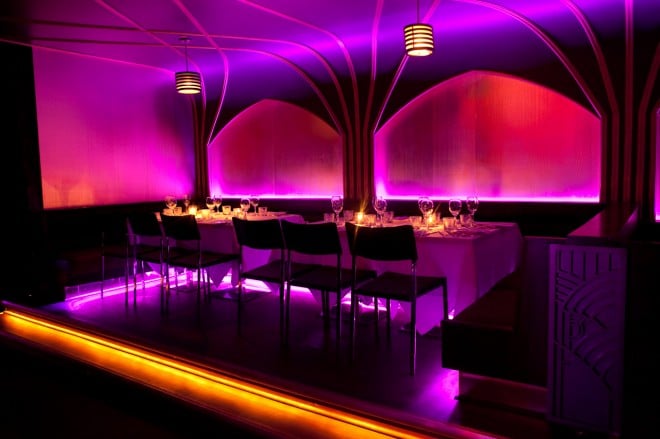 Last night, some 50 colleagues and acquaintances joined host Harvey Weinstein for supper at The Roosevelt Room to celebrate The Artist, a black and white, mostly silent movie set in 1927 Hollywood, that the Weinstein Co. purchased this May in Canne.

My job? To be a fly on the wall. But first I had to get out of the way of  Bob Weinstein, who squeezed past me in order to reach the bar, where he ordered a diet Coke. As I excused myself, a young man said hello to him. “Oh yeah!” He said. “I read your script and it was good. There’s some real crazy stuff in there! I mean, it was rough in spots but it’s workable.”

I thought shit like that happened just in the movies.

I sat at a table with a lively crew of mostly L.A. based film critics who, as one might expect, had no shortage of opinions. “What’s this?” Asked a boisterous 50 something year-old gentlemen in thin wire-frame glasses of the healthy appetizer we’d been served.  “Oh, it’s quinoa,” he sighed. “That explains why I don’t like it.  I’m more of a plain McDonald’s hamburger kind of guy.”

Of course, they had a few opinions about movies and their stars, too. “Evan Rachel Wood is like a blank slate,” he explained with no shortage of hand gestures. “She’s an extraordinary actress, when she wants to be.” This charmer of a character even confessed that, “I’m so stupid that I didn’t know Canada had different money.”

They all loved Moneyball, despite not really having any interest in baseball, and proclaimed it a total commercial, over-the-top type of film. And there was no disagreement that Ryan Gosling makes for a great interview. “He’s just so easy going.” Two of them loved Butter, a satire about a town obsessed with butter sculpting, starring Jennifer Garner and Hugh Jackman, while two others hated it.  But, “it’s commercial so it’ll do well.”

While I happily devoured that mango quinoa salad with toasted pinenuts, the woman sitting beside me, Dana, graciously engaged me in some conversation about food. When a colleague of hers, Anne, joined us, they quickly revealed themselves to be two of the most articulate, sharp, thoughtful and funny women I’ve ever met, which should come as no surprise considering they run the show at IndieWIRE–the “online heartbeat of the world’s independent film community” says Forbes, where Anne (Thompson) is editor-at-large and writes a well-respected and very popular blog and Dana (Harris) is editor-in-chief (they both worked at Variety together, too.)

Having just arrived in Toronto, they hadn’t had the chance to see some of the press and industry screenings that I’d had and were eager to hear my thoughts on Whit Stillman’s first movie since The Last Days of Disco 13 years ago, called Damsels in Distress. “Entertaining, but too long–like the majority of films I’ve seen during the festival.” Dana nodded in agreement: “90 per cent of every movie I’ve seen is too long,” she said. “If you can’t tell a story in 90 to 100 minutes, maybe it’s not a story worth telling.”

As our main courses began rolling out, a third woman joined us.  Beautifully outfitted in a black dress with a 60s style knee-length voluminous skirt, kitten-heeled black shoes decorated with a bow and a black Prada purse, she kind of reminded me of Peggy Guggenheim. “Jessica, this is Peggy Siegel,” said Anne. But Peggy was busy telling Roger Durling, also seated at our table, that she loved his little film festival (Durling helms the Santa Barbara Film Festival and was also a panelist this year at the Bermuda Film Festival.)

And Peggy Siegel, who I later learned is one of New York City’s most famous publicists and organizer of some major parties and movie screenings, has an opinion about everything. And she’s as skilled as any orator when it comes to expressing them: she was adamant that Clooney shouldn’t have premiered Ides of March, which she’s already seen three times, in Venice.  “It’s an American movie,” she said. “It should have premiered here in Toronto.” Peggy was also the only one at our table who had the pluck to ask for salt, which every dish cried out for.

The conversation turned, as it so often happens, to penises, specifically Michael Fassbender’s, which apparently viewers get to see quite a bit of in the film Shame, which I learned seconds earlier had just been bought by Fox Searchlight (Fassbender isn’t attending TIFF to promote the film because rumour has it at this dinner table that he’ll be receiving the best actor award at the Venice Film Festival.) But back to his penis: “I’ve been quoted in print as saying Ewan McGregor has the most beautiful penis I’ve ever seen,” said Anne. “Well, the title now goes to Michael Fassbender.” Poor Peggy, head down and eating her wild mushroom tagliatelle, did not look impressed.

Standing beside our table, after saying hello to Peggy, I overheard Weinstein tell a female associate, “Okay. I’m off the clock now.”  Soon after, he left, while she brought over the director of The Artist, the very modest Frenchman, and dashing in bold Paul Smith spectacles, Michael Hazanavicius. While he talked softly with Anne, Dana and I had a chance to indulge in our main course of braised beef short ribs topped with an arugola gremolata and served on beet risotto with seared rapini, (Dana politely ate half. I cleaned my plate.)

Next, The Artist‘s handsome lead, Jean Dujardin visited the table. He showed a great deal of patience with the critics, who threw a number of complicated questions at him–perhaps forgetting that English doesn’t come easily to Dujardin, yet.

As platters of dainty desserts rolled out, the tables cleared. In fact, only 10 or so guests remained. I was left alone with six portions each of Portuguese custard tarts, zabaglione with fresh fruit and amaretto chocolate mouse.  And no, I didn’t eat them all.  Just two.