Divergent: is it the next dystopian hit?

Instead of the Hunger Games's Katniss and her bow and arrow, this drama has Tris and lots of knives 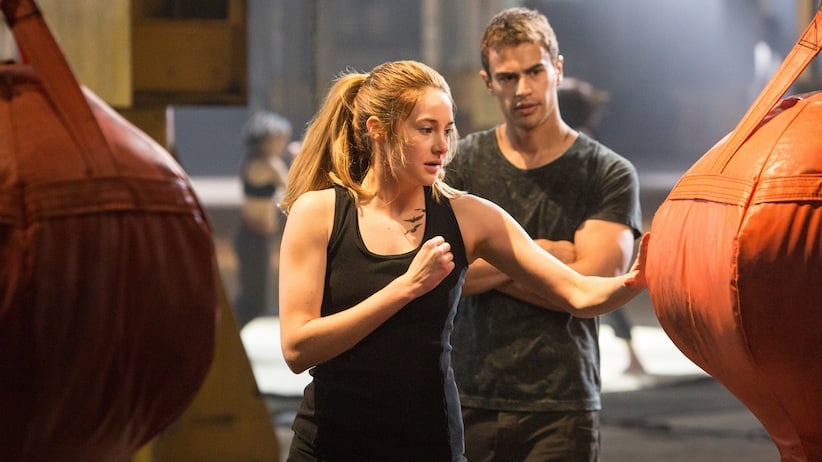 One of the best ways these days to make money is to write teen dystopian fiction—ideally a multi-part series—and sell the rights to the film industry, then sit back and watch the bank account rise like a phoenix. Veronica Roth did that with her three-part Divergent series and today theatres will be flooded with aficionados waiting to see the story of Beatrice, a headstrong teen who grows up in a future Chicago, becoming enemy No. 1 in a city of corrupt, power-hungry leaders.

This world is set in the tough, Darwinian world of Chicago, 100 years after a war devastated the city. The city survived by creating a rigidly stratified society, and by building a really, really high protective fence. Like all teens, Beatrice, 16, must chose which faction to join: Abnegation (those who help others), Amity (the peacemakers), Dauntless (the fighters), Candor (truth tellers) or Erudite (the intellectuals). When her aptitude test reveals she doesn’t fit neatly in one clique but is brave, smart and selfless, Beatrice is told she’s a divergent. And in a dystopian society ruled by labels, that’s not one you share with anyone. She choses Dauntless and ditches her earth-toned clothes and goody-two-shoes rep for black leather and a bad-ass attitude.

What’s so enjoyable about this type of film is that viewers are plunged into a world that is fearsomely different yet in still familiar—Chicago’s skyscapers are still there, though many still show the damage from  long-ago battles. Maintaining that air of intrigue by way of a fast moving plot is essential—and something Divergent lacks. After the critical and popular acclaim of the Hunger Games series, Divergent hits like a tepid wave of overwrought dialogue—”You chose us, so we get to choose you” and “I think human nature is the enemy”—action scenes as dull as butter knives and plot gaps large enough to swallow a train. Speaking of public transit, there seems to be no end of the number of train scenes—people getting on trains, jumping off trains, looking menacing on trains or holding hands on trains. And that repetition isn’t confined to modes of transportation. Want hand-to-hand combat training that always ends in a knockout? Divergent delivers enough to satisfy a MMA fan, which serves to slow down the film, especially in the middle section.

As the James Bond series’ producers finally realized when they cast Daniel Craig, turning serious actors into action stars means they have the gravitas to carry off improbable dialogue with panache. The Hunger Games packed its series with talent, including Academy Award-winning actors Jennifer Lawrence, the late Philip Seymour Hoffman and Stanley Tucci. Divergent got Shailene Woodley (The Secret Life of the American Teenager) and Theo James (Kemal Pamuk of Downton Abbey) as its leading couple. They are easy on the eyes, especially Theo James, but don’t have the skill to overcome some of the hackneyed lines in the script. While Kate Winslet is a steely villain, she doesn’t have much to work with.

Still, there are some good scenes—entering the front door to Dauntless HQ takes a viewer’s breath away—but many are  familiar to viewers who have seen the film’s ubiquitous trailer. Also helping to deflate much-needed tension are the liberties director Neil Burger takes with the book’s original plot, especially as Beatrice tries to make the cut in her new caste. Gone is the danger she faces as her skills grow. Instead, she spends an inordinate amount of time off duty and when she’s training, it’s rare to see her sweat, though her knuckles are suitably bruised and bloody. Some changes, such as the ending, are too unbelievable, even for a teen film. For instance (spoiler alert), Beatrice is unconscious for 24 hours after getting pummelled in combat training, yet within minutes of waking up she’s running (to catch a train, of course) as if nothing happened, her perfectly blown-out hair billowing behind her.

That skilfully highlighted hair will be back: two more Divergent films are in the works.