With his new doc 'Fahrenheit 11/9' taking aim at Donald Trump and the Democratic Party alike, the filmmaker proves as controversial—and frustrating—as ever 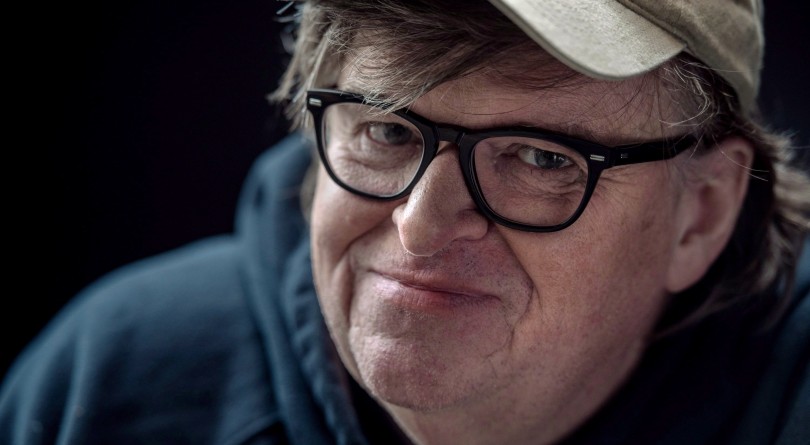 There was a time not too long ago when Michael Moore was, with the ostensible exception of then-at-large Osama Bin Laden, practically America’s most wanted man.

The release of Moore’s blockbuster anti-Bush documentary Fahrenheit 9/11 in 2004 kicked off a widespread cultural panic. The nonprofit military charity Move Forward, which raises funds for American troops stationed in Iraq and Afghanistan, called it “an al-Qaeda training video.” Eminent English critic-turned-Bush-administration-cheerleader Christopher Hitchens compared Moore to Nazi-era propagandist Leni Riefenstahl. Pirated copies spread in Cuba, and it aired on the national broadcaster to gin up anti-Bush sentiment. It even bred a micro-industry of anti-Moore response docs, with tedious titles like FahrenHYPE 9/11 and Celsius 41.1 (tagline: “The Temperature at Which the Brain Begins to Die”). Not bad for a schlubby middle-aged filmmaker from Michigan.

“People always ask me why I premiere my movies in Canada,” said Michael Moore, before the Sept. 6 world premiere of his new documentary Fahrenheit 11/9 at the 2018 Toronto International Film Festival. “I tell them: it’s because at least we know we get to show it once.” The implication is that the film is so contentious that it will be suppressed from release stateside. It’s a fear that’s more than a little self-aggrandizing, if not wholly ludicrous—a classic Moore statement. But either way: Michael Moore is, by all appearances, battening down his trademark ball cap and preparing for a rough ride. He’s ready once again to play the role of the public enemy.

The this in question is—who else?—Donald Trump. The title of Moore’s latest (a play on his smash hit Fahrenheit 9/11, which is itself a play on Ray Bradbury’s novel Fahrenheit 451) refers to the morning after the Nov. 8, 2016 election that saw Trump fatefully elected as U.S. President. Naturally, he provides excellent fodder for a Michael Moore documentary: From quick-cut montages of Trump’s various racist and sexist rants, to a curious interlude in which Moore suggests that America’s 45th President genuinely wants to sleep with his own daughter, Trump’s outsized grotesquerie makes the bungling, malapropping George W. Bush of Fahrenheit 9/11 look like F.D.R. by comparison. But that repugnant cartoonishness, Moore thinks, is by design—all part of an elaborate political pageant, distracting from the seams being ripped by mid-management Republicans at America’s federal agencies.

But now, having made himself an enemy of the Republican Party and conservative America, Michael Moore is now ready to reach across the aisle.

“The Democrats,” says Moore, “are consistent losers. They block any real progress…They are so frightened of this insurgency of young Democrats. And I hope it is their doom. They are in the way of us getting rid of Trump.”

For someone who once stood as the everyman-ish face of the Democratic Party, it feels like blasphemy, bordering on political suicide. Even the rhetoric—“losers”—is vaguely Trumpian. But Michael Moore doesn’t care. The enemy of his enemy is no longer his friend. 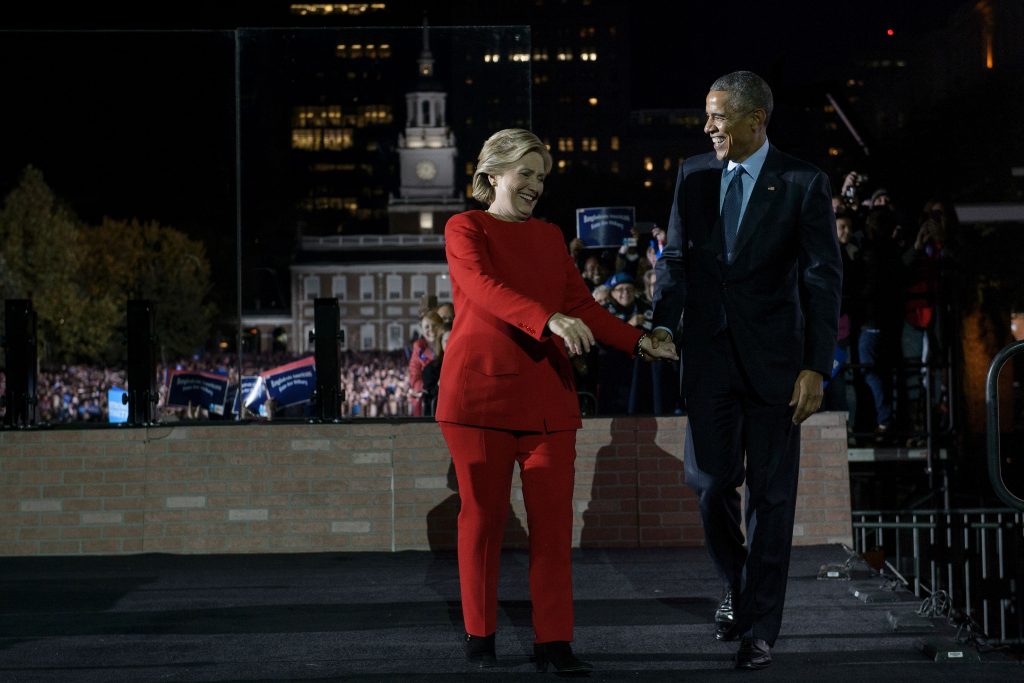 Hillary Clinton (left), 2016 Democratic presidential nominee, is welcomed by US President Barack Obama during a rally on the Independence Mall in Philadelphia, Pa., on Nov. 07, 2016. (Brendan Smialowski/AFP/Getty Images)

As urgent and real as Trump’s threat is, Moore (to his considerable credit) views his election not as some political aberration, but a consequence of a deeper rot in American political life. He was, after all, one of the few vocal centre-left figures to perceive, with horrifying clarity, the genuine appeal of Trump in Middle America. In the run-up to the 2016 election, while middle-management Democratic Party technocrats remained smugly assured of a Clinton victory, Moore took to FOX News, of all places, to warn that the party “underestimates Trump at their own peril.”

“I never wanted to be more wrong,” he reflects. “I’m outside the bubble. I live in Michigan. I saw what was going on: the anger and despair. [His supporters] didn’t necessarily like Trump as a person. But they saw him as a beautiful Molotov cocktail they could throw into a system and blow it up. He’d be the revenge against the system.”

READ MORE: There’s a deep, dark joke at the heart of Sacha Baron Cohen’s ‘Who Is America?’

But the “system” is not only the economic system of capitalism that has failed so many Americans, but the political hegemony established by the Democratic Party. As much as Fahrenheit 11/9 is an anti-Trump doc, it feels much more energizing in its critiques of the Democratic National Committee, and how it failed to trip up Trump’s ascendancy. The film criticizes Barack Obama for his mismanagement of the Flint water crisis, and cuts down Hillary Clinton and Democrat apparatchiks for rigging the primaries against Bernie Sanders. (Moore’s last film, Michael Moore in TrumpLand, was a last-ditch, Hail Mary play to swing conservative voters to Clinton’s side; he sees no apparent contradiction in his yo-yoing support for Clinton.)

Fahrenheit 11/9 thrills at the gains made by Sanders, Alexandria Ocasio-Cortez, and other self-avowed “democratic socialists” making gains within the Democratic Party. Their politics play to the alienated and disenfranchised of America, to the estimated 100 million eligible Americans who didn’t even bother to vote in the historic 2016 election (the film labels these non-voters “the largest political party in America”). Where the liberal media and Democratic “thought-leaders” rally desperately for a return to centrism and political moderation, Moore holds to swinging further left. He calls centrists the “cops of the right,” who exist to police the left, and keep it hewing closer to the political centre.

“Moderation is the true core of what makes the old guard of the Democratic Party the enemy,” he says. “They know they have to stop people like me. They’re more of a threat than Trump. We can beat Trump. But can we beat back the centrists and corporatists of the Democratic Party who have sold out, and been bought off? That’s the fight we have right now.”

READ MORE: The rise of the radical left in America’s Democratic Party

To the old guard, such sentiments may scan as blasphemy. But they’re common rhetorical currency among younger people who shore the expanding ranks of Democratic Socialists of America (DSA) and discuss socialist alternatives without suffering under the baggage of a Cold War-era mentality, which immediately equated even the word “socialism” with Stalinism, bread lines and gulags. Moore regards this new generation as his “babies.”

At the peak of his fame and influence, circa-Bowling For Columbine and then Fahrenheit 9/11, Moore served a vital function. Every two-or-so-years he’d check in, offering a film that unpacked politics for the kinds of people who only tuned into politics whenever there was a new Michael Moore movie. With typical excitement, irony, and headline-grabbing stunts (like getting a free gun for opening a bank account in Bowling For Columbine or attempting a citizen’s arrest on Wall Street bankers in Capitalism: A Love Story), Moore made the exasperating swirl of the daily news cycle seem manageable, and even fun.

At their worst, these same films can feel opportunistic—and even propagandistic. In his latest, Moore indulges an extensive comparison between the ascent of Trump and rise of the Nazi party post-Weimar Germany. He compares 9/11 to the Reichstag Fire. He even dubs Trump’s boasts about the attendance of a political rally over archival footage of Hitler addressing his public. And he does all this even after Timothy D. Snyder, Yale historian and bestselling author of On Tyranny and The Road to Unfreedom, explicitly warns against such reductive comparisons. It feels like the audio-visual equivalent of the reductio ad Hitlerum: the all-too-common argumentative fallacy that seeks to derail argumentation with rushed comparisons to Adolf Hitler. It’s an ahistoric appeal to emotion that verges on an appeal to hysteria.

Even when their politics are admirable, Moore’s films often pander with such cheap theatrics. Hitchens called Moore an opportunist. John McCain labeled him “dishonest.” Watching Fahrenheit 11/9, such criticism becomes hard to argue—even if you generally agree with what he’s saying.

READ MORE: The American empire has lost control—and its failure is imminent

Seen alongside other urgent documentary titles screening at TIFF 2018, like Astra Taylor’s thoughtful What Is Democracy? or Roberto Minervini’s devastating What You Gonna Do When the World’s On Fire?, Fahrenheit 11/9 feels like a product of a bygone era. Where some political documentarians of the post-Moore school account for their audience’s presumed intelligence, Moore himself still feels like he’s condescending. Calling out media manipulation by Trump, Obama and the DNC feels slightly dishonest in a film that thrives on similarly seductive sensations.

But for Moore at least, such sensations are features, rather than bugs. As exhibited by Fahrenheit 11/9’s packed-house TIFF premiere, he still knows how to dazzle audiences, whether by the strength of his argumentation or the sheer blunt-force impact of his imagery. It’s that massive appeal, and the ability to drum up controversy, that keeps Michael Moore in the game. While an upswing in DSA membership may seem encouraging, Moore believes he still commands the authority to help draw a bigger tent.

“I am able to reach millions of people that the left usually isn’t able to reach,” he says. “The left is used to talking to themselves in the Church of the Left. The difference between me and other people on the American left—and I’ve been very fortunate for this—is that my work can reach into Middle America. It can reach people who don’t even think of themselves as being on the left.”

Michael Moore is sick of losing. And he seems to genuinely hope America is too.