Eddie Murphy is back. He’ll be hosting the Oscars, and this weekend he shares top billing with Ben Stiller in Tower Heist, a blockbuster action-comedy. But if you shell out for this movie expecting to see Eddie’s big comeback, you may end up feeling you’ve been the victim of a box-office heist. This is not an Eddie Murphy movie; it’s a Ben Stiller movie. Eddie barely shows his face in the first half hour.

Murphy plays a petty crook who’s recruited to help Stiller’s gang of amateur thieves rob a tycoon’s penthouse apartment. When Murphy finally makes his entrance, it’s big and splashy; he comes on like gangbusters, as the profane, quick-lipped Eddie we’ve come to know and love. But he never seems like more than a guest star in a movie that is not his vehicle. In the end, his role fizzles, along with the third act of the half-baked story. That’s not his fault—it can be blamed on the script, and on director Brett Ratner (Rush Hour), who also happens to be directing the Oscars.

Tower Heist is an extremely well-endowed action-comedy. It has a crackerjack ensemble cast, which also includes Alan Alda, Casey Affleck, Matthew Broderick, Michael Peña, Téa Leoni, Gabourey Sidibe, and Judd Hirsch. With glossy Manahattan locations, opulent production design, and a high-octane score, it looks and sounds fabulous. There are some priceless scenes and lovely turns of character acting. But a heist movie, like a baseball game, has a bottom line: everything hinges on closing the deal. Tower Heist backs itself into a narrative corner then tries to cheat its way out. It slips into farce just when it needs traction, and the plot disintegrates into a heap of loose ends and short cuts that seems as fraudulent as the financial swindle that its villain is accused of.

Too bad, because the story starts out with a strong premise, and a bunch of characters we’d like to root for. Josh Kovaks (Stiller) is the buttoned-down manager of a luxury apartment tower who is obsessively devoted to all his clients, especially Arthur Shaw (Alan Alda), a billionaire whose penthouse is walled with art by Picasso, Lichenstein and Warhol, and who swims in a private rooftop pool with a $100 bill painted on the bottom. Shaw is a cross between Uncle Scrooge meets Bernie Madoff, though Alda could be channeling Mr. Burns from The Simpsons. After Shaw is charged with defrauding his investors in a scheme that also robs the tower’s staff of their retirement savings, Josh Kovaks snaps. After he’s fired, he decides to get even by stealing $20 million that he believes lies in a safe in Shaw’s penthouse. Josh recruits his inept gang from the building, then ropes in the only thief he knows—Slide (Murphy)—to give the crew a crash course in crime.

Murphy makes a meal of his scenes with the hapless crew, but setting up the heist is more fun than its execution. Once the robbery gets into gear, there’s a weird conflation between the grumpy, half-assed commitment of Eddie’s character and that of Eddie the actor, who simply doesn’t have enough to do. You can almost see him wondering, “What the hell am I doing here?” That’s especially pointed in a scene with Gabourey Sidibe (Precious), who’s cast as a tough-mama safe-cracker with a shaky Jamaican accent. When she starts coming on to Murphy, it looks like he’s simply refusing to play ball.

Perhaps more than any other genre, a heist movie mirrors the blueprint created by the characters—the thieves go through their own process of casting, plotting, location scouting, and so on. God, as they say, is in the details. But in this case, He’s left the building.

If you want to see a perfect little caper movie on a much tinier scale, and don’t mind subtitles, you should check out Le Havre, which opens in Toronto this weekend. The failure of this gem to win a prize in Cannes was widely considered to be the most egregious omission by Robert De Niro’s  jury. Set in a retro Gallic world that seems timeless, it’s a deft intrigue about an elderly artist and his wife who harbour an illegal immigrant—an African boy who steps from a shipping container in the French port of Le Havre—and enlist their community in the plot. Finnish master Aki Kaurismäki directs note-perfect performances with the deadpan delicacy and painterly control that has become his signature—an unpretentious auteur stamp as distinctive as that of Cronenberg or the Coen brothers. A gem like Le Havre doesn’t cater to the same popcorn cravings as Tower Heist, but in the end it’s a far more satisfying experience. 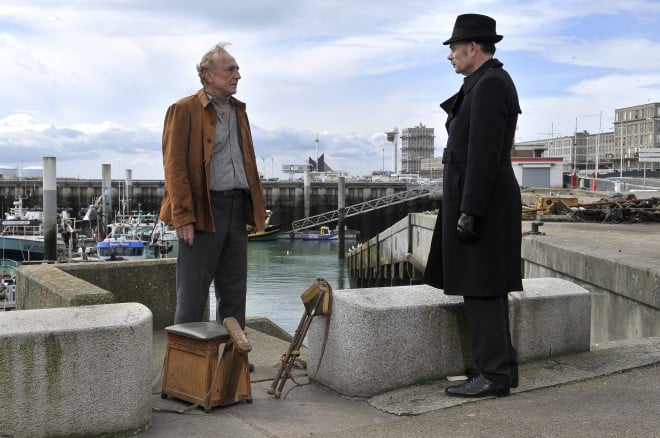