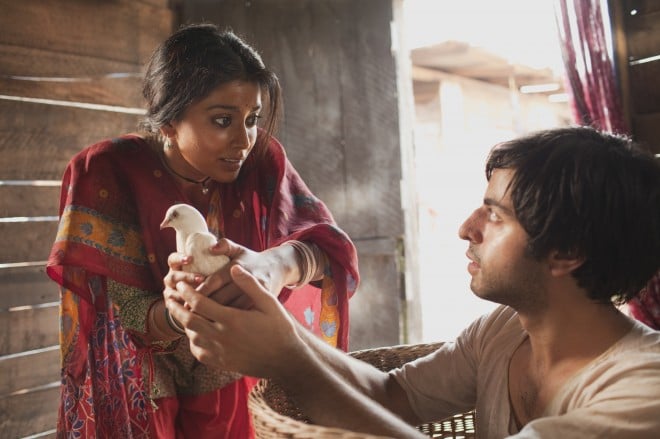 Midnight’s Children is a lavish spectacle that unfolds against half a century of South Asian history with the complexity of a Russian novel and a blush of Bollywood melodrama. Based on the Booker Prize-winning novel by Salman Rushdie, it’s the most sumptuous, and ambitious, Canadian movie you’re likely to see this year. It may also be the least Canadian Canadian movie you’ll see this year. Aside from director Deepa Mehta, her producer/husband, David Hamilton, and the colour of the money from Telefilm Canada, and some crew, there’s nothing tangibly Canadian about this movie—at least not the lead actors, the characters, the locations, the setting, or the story.

[Since posting this blog, the above preamble provoked a small Twitter tempest. In my first draft, I neglected to specify lead actors. Rushdie pointed out that two of the film’s large cast of supporting players, Zaib Shaikh and Anita Majumdar,  are most definitely Canadian. Those actors were justifiably outraged. Even after I corrected the oversight, there’s been a flurry of tweets accusing me of seeing Canadians as white-only.  Offense was taken at the trigger-word “visibly.” But it never occurred to me that people would think I was talking about skin colour. What I meant was, if you walked into Midnight’s Children cold, without knowing anything about it, from what you SAW you’d never guess it’s a Canadian movie. It’s about the history of India and Pakistan. My point was never to question the Canadian-ness or the talent of those Canadians involved in making Midnight’s Children—just to observe that the film is an eminent example of a Canadian cinema that, in a world of co-pros, now tends to favour non-Canadian stories. (‘Cosmopolis,’ ‘Rebelle, etc.’) That may not necessarily be a bad thing. But there’s a complex discussion to be had (not here) about the extinction of a traditionally “national” cinema and whether or not Telefilm should fund Canadian filmmakers regardless of where their stories are rooted. I don’t have an easy answer. And none of this any bearing on my opinion of Midnight’s Children, which—if you’re still with me—I’ve tried to hammer out below.]

Writing about Cloud Atlas, another vastly ambitious literary adaptation, New York Times critic A.O. Scott said it’s “by no means the best movie of the year, but it may be the most movie you can get for the price of a single ticket.”   Midnight’s Children feels like the most movie you could get out of Rushdie’s novel. With  Zhivago sweep, its sprawling narrative spans three generations, six marriages, two surgical abductions, several wars, and political fires that forged three nations: India, Pakistan and Bangladesh. Painterly tableaux range takes us from the flooded killing fields of Pakistan’s civil war to the rubble of a New Delhi ghetto being bulldozed by the military.

The story begins in India, during the final decades of  British colonial rule. A liberal doctor from Kashmir marries a patient after courting her through a hole in a bed sheet held up as a titillating concession to modesty. Settling in Agra, site of the Taj Mahal, they raise three daughters, of whom Mumtaz (Shahana Goswami) marries twice before giving birth to our protagonist, Saleem. Then the narrative finally catches up to the back story—ignited by the fireworks of India’s independence at the stroke of midnight, August 15, 1947, when Saleem is born and switched with another baby. A nurse in the maternity ward, entranced by her revolutionary lover, has the newborns trade place to “make the poor rich and the rich poor.” Saleem, a child of privilege, is given to a poor accordian-playing minstrel  named Wee Winkie, whose wife has died in childbirth. Her baby boy, Shiva, is handed over to Saleem’s parents. And with Dickensian symmetry, these two class-crossed males grow up “handcuffed to history,” in the words of Rushdie, who wrote the screenplay and voices the narration for its protagonist.

With diverging destinies of Saleem and Shiva fused to India’s own, the movie propels itself through  three-ring circus (binder?) of history, romance and magic. Deepa Mehta does a fabulous job of shooting this Cirque du Salman. She balances a terrific ensemble of actors who are seductive and strong. She weaves Rushdie’s busy tapestry with virtuosity and passion. And her film is beautifully crafted. There are, in fact, many good reasons to see Midnight’s Children. And for lovers of the book, it may bring the story’s elements magically to life. But the movie lacks the elegance, and coherence, of Mehta’s Oscar-nominated Water, which benefited from a simpler story and strong heroine. In Midnight’s Children, a tale of male rivalry, the female characters lack depth. And the narrative becomes is so farflung it’s hard to know where to invest our emotions.

If God is indeed in the details, much of the beauty in Mehta’s film resides in its myriad textures, colours—and narrative threads. Yet as the plot thickens, and spreads, the drama loses its way. This two-and-a-half-hour epic keeps its balance until the final hour or so, when twin scenarios of history and magic start to run amok. The whole movie, meanwhile, seems hobbled by the energetic but overbearing  presence of Rushdie himself.  It’s often a mistake for a novelist to adapt his own work for the screen: it’s hard to be ruthless with your own work. Between the dialogue and the narration, which seems designed to show off the writing, Rushdie’s voice looms too large.

The script seems too enamored of its own story. Like an OCD child who has to tap every fencepost on his way home, it signposts each moment of  significance. It’s also dense with exposition, to the point that meaning suffocates mystery. Perhaps the most transparent example is when the protagonist first meets his circle of magical, or imaginary, friends (his fellow progeny of that same midnight hour). In a coy eureka moment, he discovers the author’s title: “Children of Midnight. . . no, Midnight’s Children!”

Rushdie has provided a textbook example of a screenplay labouring under the delusion that it is the movie, rather than the blueprint for the movie.  It has the ring of an over-confidant musician who believes he’s controlling the band. It makes you wish that after so many prizes, this writer had rested on his laurels,  left his mitts off the adaptation, and let the movie take its own curious shape. But then that’s one of those silly hypothetical notions. Without Rushdie’s involvement as a literary household god, executor of his own brand, most likely there would be no movie.

Our struggling English Canadian cinema, which never gets enough respect at home, has often looked for legitimacy in literary pedigree. Producer Robert Lantos has banked his fortunes on it time and again, from Black Robe to Barney’s Version. Sarah Polley launched her feature directing career with an Alice Munro adaptation, Away From Her,  and will next tackle Margaret Atwood’s Alias Grace.  Even Canadian movies not based on novels, those sprung fully formed from the dark matter of a Cronenberg or Egoyan, tend to mine their shadows from existential tunnels worthy of Nietszche and Beckett. So maybe Midnight’s Children is more Canadian than it seems. The feat of this film’s improbable production, saturated with such careful reverence for its literary source, makes you wonder what other country could have possibly made it.

Here’s a movie you’ll never see on an airplane. Flight stars Denzel Washington as Whip, a veteran airline pilot who needs more than altitude to get high. He gets into the cockpit of a passenger jet one morning after jolting himself awake with a line of cocaine, a hit of marijuana, some stale beer from the hotel bedside table, and a couple of vodka shots from those little airplane bottles. What happens next is not strictly his fault. Due to a mechanical failure his plane drops into an uncontrollable dive. With fighter-pilot acrobatics, Whip pulls off a heroic crash landing. Problem is investigators learn that our hero was loaded at the time, which is not good, though we can’t help but wonder if he could have pulled off his miracle landing were he not stoned.

Flight’s opening sequence of Whip getting up, getting blitzed, getting off the ground, then hot-dogging his way out of a lethal tailspin, rolling the plane to the passengers’ horror and landing in a field, may be the most terrifying jet travel scenes ever filmed.  Then things get a little quieter. As  the inquiry into the crash unfolds, Whip hides out and drinks while his legal team get antsy. He holes up with a fellow addict, a down-and-out masseuse (Kelly Reilly). And the movie settles into tight combo of procedural intrigue and addiction drama, allowing Denzel to work the corners of   cool-dude swagger and ballsy penitence.

This R-rated fare is not what we’ve come to expect from director Robert Zemeckis, whose career has devolved from Back To the Future to Forrest Gump to Cast Away. His penchant for sentimental overkill peeps through in places, and the film’s ending seems all too pat. But for what it is, Flight works as gripping, grown-up drama. Washington gives a performance that, with the right push, could get him another Oscar nomination. Don Cheadle is note-perfect as his fiendishly slippery lawyer. And John Goodman is a gas as a gonzo drug dealer cranking Sympathy for the Devil on his iPod. For my interview with Zemeckis, go to my recent article on Flight in the magazine.