Fifty Shades of Grey: Lots of sex, ropes—and way too much math 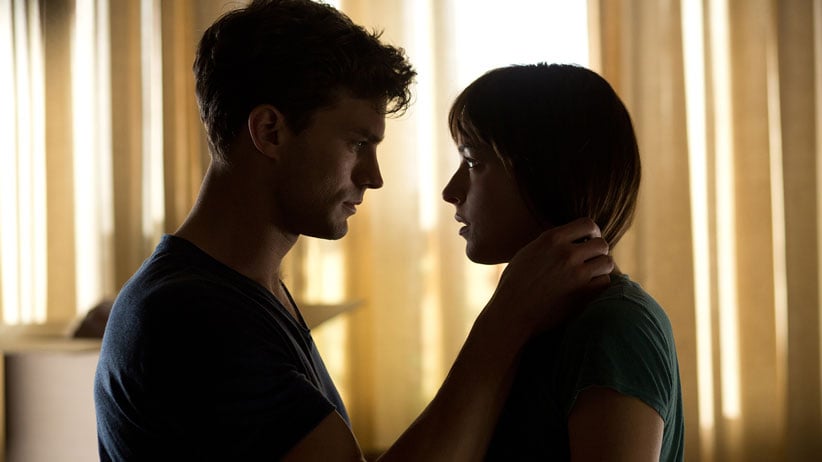 “How were the sex scenes?” That’s everyone’s first question. And why wouldn’t it be? Advance tickets for the much-anticipated Fifty Shades of Grey film didn’t go on sale in January because people were eager for the dialogue. The 700-plus seat theatre in downtown Toronto was packed with an overwhelmingly female crowd, most around 30 years old. They’d come to see how director Sam Taylor-Johnson had turned the insanely popular BDSM chick-lit by E.L. James into a mainstream film. The short answer: Not as steamy as we expected. For one, the film has an R rating, not box-office-killing NC-17, so while there’s lots of nudity, including flashes of pubic hair, full-frontal nudity was forsaken. And while viewers get to spend lots of time watching Jamie Dornan’s ripped body (and Dakota Johnson’s, but Dornan’s muscular physique gets preferential treatment onscreen), the sex scenes are so very artfully shot that they inspired yawns (though that changed during the film’s cliffhanger ending).

The trouble is, the attraction is forced—so fake that this theatre frequently erupted in peals of laughter. “You’re the complete serial killer,” quips Anastasia Steele when billionaire Christian Grey pops into her hardware store to stock up on cable ties and a hank of red rope. Everyone knows, wink wink, that he’s a dominant looking for a submissive—everyone except the innocent Ms. Steele. But the flirting more or less ends there. There are hints of it in the wooden dialogue: “I would like to bite that lip.” “I won’t touch without written consent.” “I have to let you go.” But the total absence of chemistry between the actors robs those lines of any sexual frisson.

The other problem is that while there’s some meat to Dakota Johnson’s role of the ingenue, Jamie Dornan is given absolutely nothing to work with for most of the film. Why is the experienced dominant chasing her around the Pacific Northwest in the billionaire’s version of planes, trains and automobiles? Is it her love of Liberty print shirts? Or that she can drunk dial with an old flip phone? It feels as if the producers were so worried about how to put a BDSM-focused romance on the big screen that they decided to turn out the most stylized version of an erotic story, and forgot to include the edge of danger that turns a romance from pablum into a spine-tingling hit. (See Out of Sight, starring George Clooney and Jennifer Lopez, in her only decent role.)

It must be said the screen version is a sharp improvement over the inane copy in the books. The Fifty Shades trilogy is The Da Vinci Code of erotica—a badly written, inanely plotted piece of pulp fiction that nevertheless sold 100 million copies.

Still, the stylized nature of the film kept my mind wandering away from what I was seeing on the screen. When Anastasia got her first look at the floggers, leather cuffs and assorted leather-clad benches in Christian’s “red room of pain,” I couldn’t stop analyzing his clashing decorating styles. While his huge penthouse was a marvel of minimalist decorator chic, the playroom was stuffed with bizarrely ornate fixtures that screamed Wal-Mart rather than Richard Meier. And does he own shares in a red rope business? When Christian reveals details about his previous sexual encounters, I kept doing the math in my head: he was seduced by a family friend at 15, spent six years as her submissive, has had 15 women “under contract” since then, but is only 27 now. Oh, and a billionaire. So he started his domineering ways at 21, had time to build a business empire and replace each submissive every 4.8 months.

Then, when the viewer almost gives up hope, there are scenes that get one to focus. When Anastasia and Christian go over her changes to the detailed dominant-submissive contract—vibrators are OK, genital clamps are out—he shows flashes of real emotion while she’s enjoying being in the driver’s seat during the negotiations. But it’s all too brief. But why? you want to ask. Viewers have no sense of why he needs this type of relationship, nor why the unworldly university student so readily agrees to it. That’s for the next film in the Fifty Shades franchise. What’s unclear is how many people will stick around to watch it.