Filmmaker Errol Morris and his war of words with Donald Rumsfeld 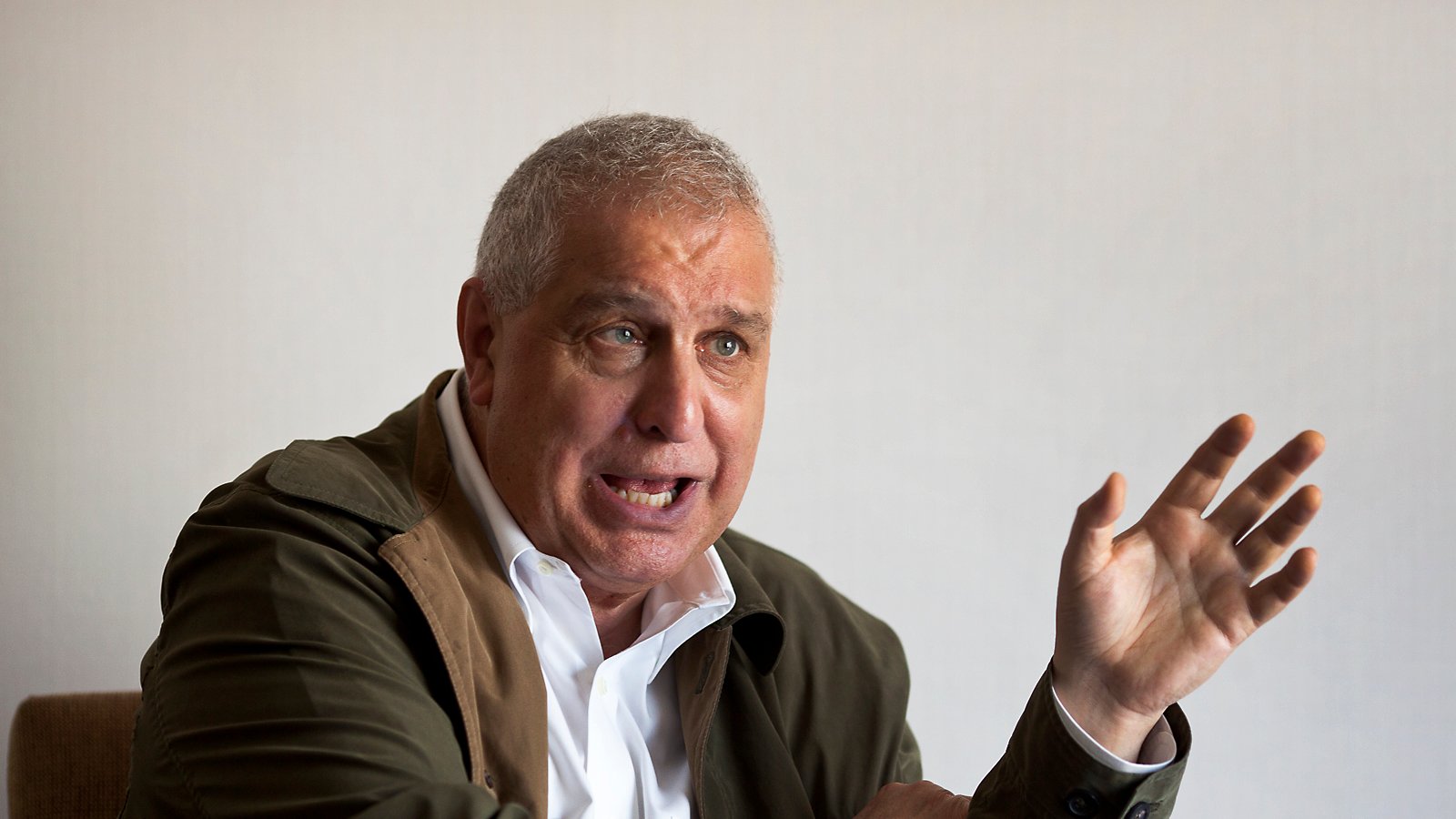 Documentarian Erroll Morris has spent the past 36 years coaxing remarkably revealing and candid interviews from his subjects, from Texas convicts and cagey police officers to Abu Ghraib guards and Robert McNamara, the guilt-ridden architect of the Vietnam War. The Oscar-winning director—who honed his interviewing skills as a private eye in the 1980s—returns to the political arena this month with his new film, The Unknown Known, which attempts to humanize former U.S. secretary of state Donald Rumsfeld in much the same way his 2003 film The Fog of War redefined McNamara’s legacy. But Rumsfeld, who led and botched the Iraq war under George W. Bush, proves to be a frustrating target, and the pair’s edgy on-camera confrontations produce a verbal sparring match that’s hypnotic.

Q: Why a film about Donald Rumsfeld, seven years after his resignation? Why now?

A: Why now? Now is now. When am I supposed to do it if I don’t do it now? Someone said to me, well, you waited 30-plus years before interviewing Robert McNamara, so why so soon after his tenure as sec-def did you interview Donald Rumsfeld? You do things when you can do them. His book, Known and Unknown, had just come out, and I read it—with some difficulty—and I wrote to him. Much to my surprise, he said we would meet me and talk about the memoir in his offices in Washington.

Q: Did you know he would sit down with you for so long? McNamara originally agreed to only one hour, but you stretched it out for days.

A: You never know how much you’re going to get, and whether you have enough or too much. He would have gone on longer, I think. We did 33 hours more or less over a year. I would show him cuts of the material in between, and while he had no right of approval, I specifically asked him to tell me what he didn’t like, what he liked. So I received several “snowflakes” [what Rumsfeld calls his infamous memos in the film] from Donald Rumsfeld criticizing various cuts of the movie, and I hope someday they can be published because they’re really fascinating.

Q: Going through thousands of “snowflakes” must have been daunting research.

A: The process was enormous, and I had a lot of people helping me. Researchers waded through tremendous amounts of material. I should write something about it, I have so much material.

Q: A supplemental book with the DVD, maybe?

A: It’s really tricky. You make a movie, and know that when you’re making it, all the stuff you accumulate is never going to see the light of day. It may be the most inefficient process ever. But the hope is that something important has been captured, and I think it has. I think it’s an extraordinary story, and so absolutely different than McNamara and The Fog of War.

Q: By the end of The Fog of War, we get a real sense that McNamara has remorse, that he feels guilty. With Rumsfeld, that never becomes clear.

A: I think it is clear, though: It’s clear that there is no remorse. Before we started this process, I gave him a copy of The Fog of War, and he told me he disliked it. In his words, “That man has nothing to apologize for.” Rumsfeld is not second-guessing himself; Rumsfeld is not apologetic. He is absolutely convinced of his own rectitude, the correctness of his decisions. He believes the war was a success.

Q: Some critics say that it feels like Rumsfeld is let off the hook, though.

A: I had written down a list of all the things people were going to say about this movie that were going to really piss me off. Trying to inoculate myself, really, as it’s always frightening taking these things out into the world. I expected people to say I hadn’t been hard enough on him, that the questions hadn’t been insightful, that nothing new was uncovered. I don’t think any of that is true, by the way. We have an expectation in political-themed documentaries where the director is going to stand in for people who are angry, and I’m sure there are a lot of people out there that would love to seize Rumsfeld by the throat and shake him, but it’s not the nature of my enterprise.

Q: He does seem quite self-assured the entire film.

A: I read him the Schlesinger report [about brutality at Abu Ghraib prison], which basically says what [Rumsfeld] told me earlier in the film is false. He’s confronted with the material directly. And he looks at me and says, “I’d agree with that, I’d agree with that.” In that moment, you’re a chess player—you have various moves open to you. You can say, “Well you just said X and I just showed you what you said is false. Explain that.” Or you could say nothing. And here is an interesting question about journalism and interviews in general: If you’re creating some kind of dramaturgy, where you want to capture conflict and an altercation between a subject and the interviewee, then you do want to go down that road and ask them to explain? But if the film is an essay on what is going on inside this one man’s head—is he actually aware of what was just read to him?—well, we just sit there looking at each other.

Q: At what point do you decide to adopt which strategy?

A: I’m fond of this essay by [Arthur] Schopenhauer called “The Art of Controversy,” where he gives you ways to win an argument any way you can. One of the examples he gives is that you’re talking to someone, and they’ve shown you to be completely wrong about everything. It’s embarrassing. Then you’re supposed to look them right in the eye and say, “You know, I’m really glad you came around to my way of thinking.” I never knew and I still don’t know whether I was being manipulated, or in some truly skilful way, he avoided the question altogether by deflecting, or acting like he never even heard it. Whether he is so fixed in his thinking that nothing can ever contradict what he believes. I sort of came to believe it was the latter, and I find that to be the most scary aspect of my movie, because if that’s true, then you’re dealing with someone who is extraordinarily un-reflective and unengaged. Not as a stance or a conscious decision, but in some very deep sense.

Q: Then you hit him with, “Are you saying stuff just happens?”

A: Repeating that infamous remark, made during the rioting post-invasion in Baghdad, and he then says, “Well, in war there are unintended consequences. Things you haven’t anticipated.” Then I wonder, well, if that’s true, then why the f–k did you go to war?

Q: I got the sense of mutual respect toward the end.

A: On one hand we’re talking about one of the most successful men in leading into the 21st century, with this extraordinary resume. He’s a four-term congressman, chief of staff of the president of the United States, it goes on and on. He’s worth a major fraction of a billion dollars today. In many senses of the word, he’s enormously successful, and yet, there’s this feeling of emptiness.

Q: But he is responsible for a war.

A: Why did these guys go to war? I make a movie where McNamara talks about the Cuban Missile Crisis and their attempts to avoid going to war. What’s the version of that story in The Unknown Known? Rumsfeld says he gets a call from Dick Cheney’s office, to come over to the West Wing and bring over the chairman of the joint chiefs of staff. They go over to the West Wing and there’s Prince Bandar [bin Sultan] and maps are spread across the table. Are they trying to avoid war? I don’t think so. He’s not going in there and engage in half-measures. Aren’t we supposed to be ameliorating conflict? No. Preventing conflict?

A: Pushing it forward with this kind of crazy enthusiasm. Even today, Rumsfeld has been publicly criticizing Obama. You can’t even tell whether he’s opposed to Obama’s policies in Syria or he just wants to say Obama’s a wimp. Completely contradictory and conflicting claims. One thing about Rumsfeld is that you’re there to kick ass, and maybe I have a different idea of the purpose of government. I had this exchange with Rumsfeld where I asked him, “If you really want to get rid of Saddam Hussein, why not just assassinate him?” And he asks me, “Who do you mean by ‘you’ ” OK, I mean “we,” because he’s right in some sense. Was I opposed to the war all along? Yes. But am I a citizen of the U.S.? Am I part of the deal? Well, I wish I weren’t, but I am. He’s right about the “us.” But the “us” brings to me a profound sense of unease, and I’d go as far as to say shame.