Four funerals and a 'Five-Year Engagement' 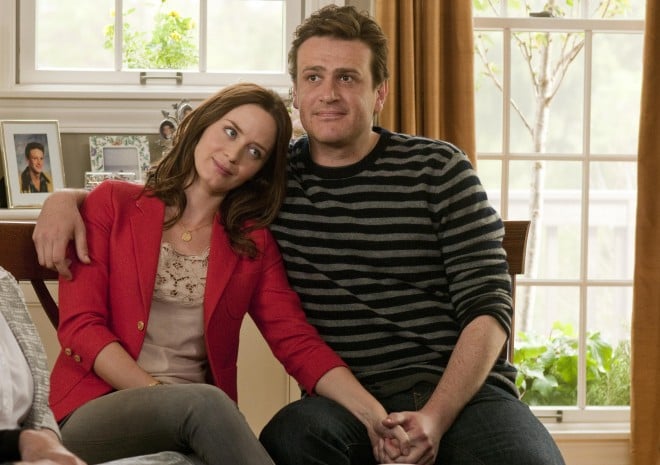 Emily Blunt and Jason Segel in 'The Five-Year Engagement'

Producer Judd Apatow loves to break the cardinal rule of romantic comedy: keep it light, tight and trim. His movies are all-you-can-eat buffets of behavioural comedy.  The Five-Year Engagement is stuffed with set pieces, witty repartee, flashes of male nudity, gross-out jolts of horror, streams of social commentary, raging fights and tender love scenes. And it weighs in at more than two hours. Right from the title, we know what we’re in for: five long years of trouble in romantic paradise—the movie version of the late-night relationship talk seems it will never end. There’s a certain logic in letting a marathon engagement comedy, or a prison movie, drag on. But this one, like its hero, is in need of a stronger spine. This comedy of romantic manners is bloated, soft in the middle and belted with a too-skinny storyline, but, hey, it’s got enough belly laughs to get by—and a pair of terrifically engaging lead actors in Jason Segel and Emily Blunt.The Five-Year Engagement reunites Segel with director Nicholas Stoller, his writing partner on Forgetting Sarah Marshall and The Muppets. (Stoller also wrote and directed Get Him to the Greek, spun from Russell Brand’s rock star character from Marshall.) Tom (Segel) and Violet (Blunt) meet at a New Year’s Eve masquerade party. He’s comes as Super Bunny, in a fuzzy pink sleeper outfit; she’s dressed in scarlet as Princess Di. That sets their power dynamic for much of the story. She’s the sharp, vivacious go-getter in charge of the relationship; he’s the nice guy happy to accomodate her.

A year after meeting, he proposes. She’s thrilled. But one damn thing leads to another, forcing them to delay the wedding again and again. Marriage gets shelved when Violet takes an offer to pursue an academic career in Michigan; Tom obliges her by giving up his position as chef at a hot San Francisco restaurant to settle for a job making sandwiches in a Michigan deli.

This movie could have been spun from recent cover stories in Maclean’s and Time announcing that women are becoming “the richer sex,” as they overtake men in the work force—although the script had to have been written long before. Tom’s infinite patience is, well, finite as he eventually tells Violet: “You have no idea what it’s like to be a man in a relationship who doesn’t have a job he’s proud of.”

While the engagement withers on the vine, Violet’s quirky sister (Mad Men‘s Alison Brie) beats our couple to the altar with a shotgun wedding after Tom’s best friend and colleague at the restaurant (Moneyball‘s Chris Pratt) knocks her up—and lands the plum job that Tom would have had if he wasn’t in Michigan scraping ice off his windshield. Then one by one, the older relatives start dying off, never getting a chance to see the kids get married. (There’s one inevitable wedding in the movie, and four funerals.)

Predicatably, as the rift grows between the engaged couple, they both stray with grossly inappropriate mates. Violet falls for her pretentious Welsh psychology prof—Rhys Ifans with a Tintin updo—and Tom with a sex-crazed young bimbo who threatens to wear him out. (For once, couldn’t someone in a romantic comedy be lured into a romance with a plausible partner so there’s a real choice?)

Despite the facade of his-and-her parity, and a strong performance from Blunt, the story is written from the male perspective. As Tom turns into a deer-hunting nerd and grows a ridiculous beard, we sit and wait for him to resume his sanity and grow a pair. This is where the script betrays its ambition for a detour into implausible farce. As with so many romcoms,  there’s a centrifugal core of earnest realism in the main love story—the eye of the hurricane—while the comedy gets zanier and more farfetched among the peripheral characters.

Blunt and Segel, however, have good, spontaneous chemistry. These are two smart, attractive actors we’re happy to spend time with. Blunt looks like she could handle anything the script would throw at her. And Segel seems to be inching into a niche as the new Tom Hanks, Hollywood’s designated Sensitive Guy. If that’s the case, the romcom has evolved. Unlike Hanks, he has movie-star eyes—large, warm, puppy-dog eyes that still manage to suggest a deep reserve of intelligence. And he helps write his own roles with a sense of discovery, as if on a shambling mission in search of male maturity.

Although the glib, gonzo style of the Apatow school of comedy gets antic around the edges, it has more emotional substance than the Tom Hanks/Meg Ryan confections of yore—not just because we can actually stomach seeing the stars in bed together, but because they don’t spend the whole movie trying to figure out they’re in love. Five-Year Engagement isn’t about falling in love. That’s a given. It’s about hashing out a relationship and learning to accept its non-deal-breaking imperfections. Too bad the script doesn’t have the same discipline and maturity.

Novelty is crucial to any Hollywood romcom, and it’s always fun to see something that hasn’t been done before. We’ve come to expect that from the Apatow camp, starting with the novelty of the premise. The Five-Year Engagement throws it right into the title with a numeral, just like Apatow’s The 40 Year Old Virgin. There’s also a scene of a guy faking an orgasm during intercourse. Like much of the movie, it’s not all that convincing, but it is funny.