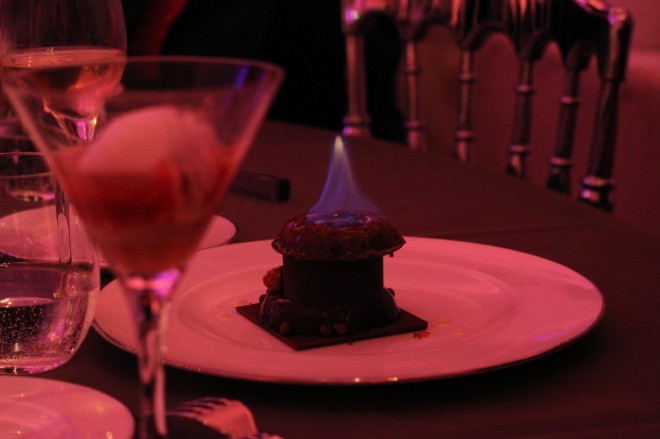 Cannes can always be counted on to deliver surreal contrasts. As a fierce rainstorm swept the Croisette, Leonardo DiCaprio and the gang from The Great Gatsby climbed the red stairs of the Palais, umbrellas in hand, for the premiere of  a movie based on the novel that F. Scott Fitzgerald had written just a few miles away while his wife, Zelda Fitzgerald, was having an affair on the same strip of beach where the Palais now stands. I’d already seen Gatsby. So as that lavish melodrama played in 3D, I sat in a wet tuxedo in the theatre next door, watching Mexican gangsters suspend a man from a ceiling of a family home in the desert and set his genitals ablaze while their children watched. The first of 20 features to be shown in the festival’s main competition, the movie was Heli, by Mexican director Amat Escalante–a grimly realist portrait of how the drug wars ravage innocent lives in his country. It was like igniting the battle for the Palme d’Or with a Molotov cocktail. 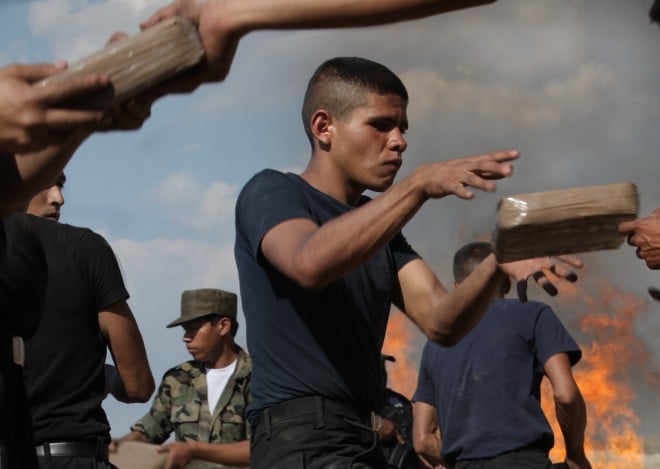 A scene from 'Heli'

Composed with a poetic eye, Heli is a potent drama of random cruelty. Too bad its merits will be forever upstaged by the horror show of a man’s burning junk. The gratuitous killings of two dogs, which prompted walk-outs earlier in the film, seemed mild compared to this–a provocation from a young director showing us something we’ve never seen before. Most likely it’s based on a real incident; you don’t have to make this stuff up in Mexico. But as the camera lingers on the poor man, you’re yanked out of the movie. You can’t help wonder how it was done, because it’s clearly not a digital effect. And you wonder what Steven Spielberg, the president of the jury will think. The Cannes competition is like that: at every movie, it’s as if you’re watching it with an invisible date, or dates, as you try to imagine what it will look like through the eyes of a Spielberg, a Nicole Kidman or an Ang Lee. 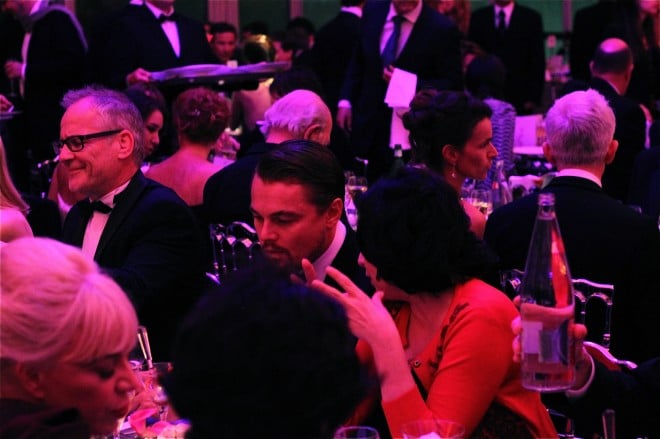 So why was I watching a movie in a damp tux? Because my next stop was the festival’s opening night dinner for The Great Gatsby, a glittering soiree held under a vast tent with a level of glamour worthy of one Gatsby’s own parties. Sitting next to festival director Thierry Frémaux, DiCaprio held court at a long table with the Gatsby cast and the film’s director, Baz Lurhmann. It’s strange how this actor, who once struggled to shake his image as Titantic‘s boyish heartthrob, has morphed into a patrician. Incarnating a series of uber-powerful men, from Howard Hughes to J. Edgar Hoover, he has become deeply invested in his own gravitas. And he owned the room.

Next to his table sat the jury. I chatted briefly with Spielberg, who was about to dig into his appetizer of sweet onion mousse with bergamot, caviar and peas. I mentioned that at the afternoon’s press conference he seemed to be approaching jury duty with a huge sense of fun. “The great thing is, nobody’s on trial for their life here,” he said, grinning. Later I ran into his fellow juror Ang Lee, who still seemed to be weighing his responsibility with a heavy heart—”it’s my duty, I have to do it,” he sighed. 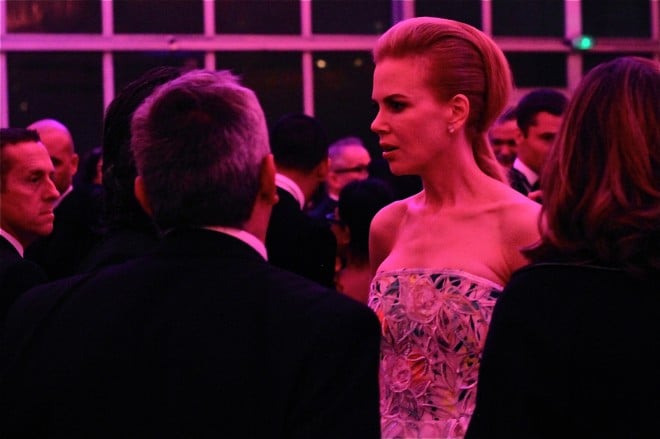 Oh yes, and there were stars. Carey Mulligan and Nicole Kidman and Elizabeth Debicki all sheathed in creamy white evening gowns. Standing next to Kidman, she seemed taller than me (I’m 6′), but I guess it was just the heels and the sculpted hair, because Google says she’s just 5’9″. Bollywood star Amitabh Bachchan,  jury member, was the shiniest man in the room, a vision of black sequins. And Harvey Weinstein . . . well, he looked like Harvey Weinstein.

Quebec’s Denise Robert, producer and partner of Denys Arcand, eagerly pointed out legendary shoe designer Christian Louboutin, who she considered to be by far the most desired man at the dinner. More than any movie star. He was wearing pearl-tassled patent leather shoes with red soles. I know nothing about fashion. But I ‘m learning. I just saw Sofia Coppola’s The Bling Ring, based on a Vanity Fair article about a gang of teenage girls who robbed the homes of celebrities such as Paris Hilton, Lindsay Lohan and Orlando Bloom. The title of the article: ‘The Suspects Wore Louboutin.’ More on that later . . . 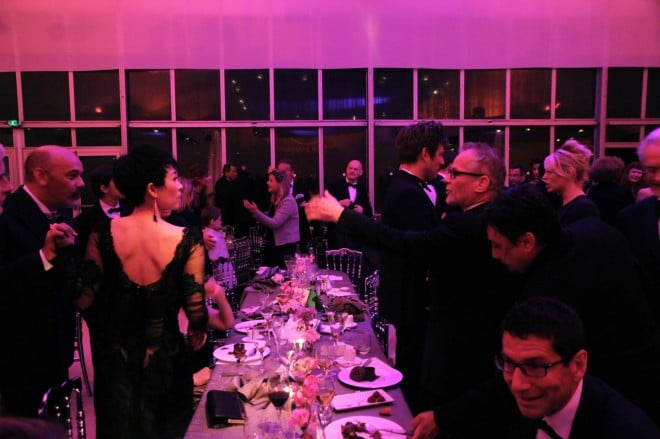 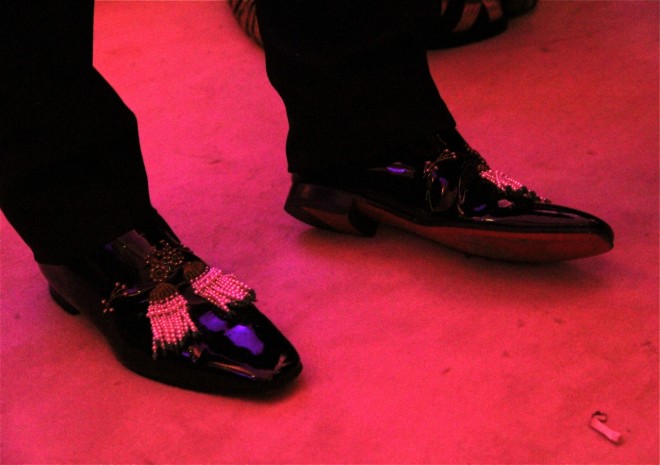 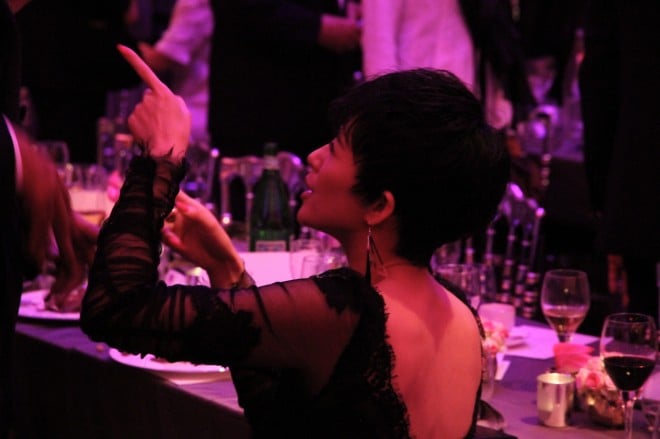 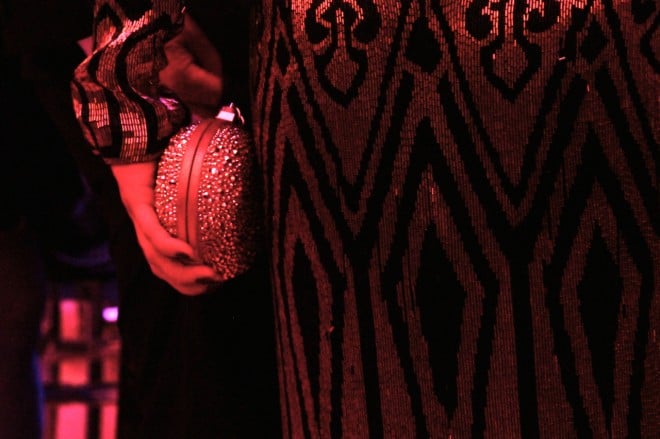 Dressed for the Gatsby dinner / photo by BDJ