Jane Bond, Ghostbusters, and ladies night at the movies

Gender-flipping genre films can have huge appeal—if they get past the clichés. 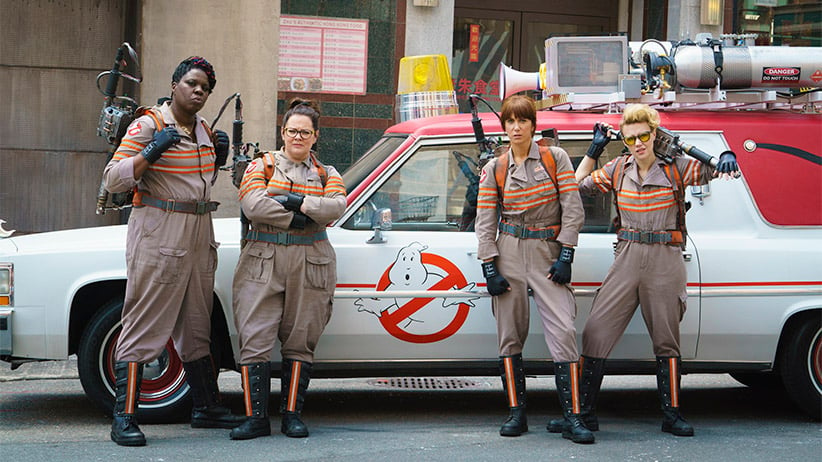 Jane Bond, the female equivalent of James Bond, isn’t a character who has ever appeared in books or movies, but she’s already more popular than most characters who have. With the producers of the Bond films reportedly looking for a successor to Daniel Craig, The X-Files star Gillian Anderson tweeted a fan-made poster that showed her as the new super-spy. Her slogan—“It’s Bond. Jane Bond”—became an instant meme, to the point that Emilia Clarke (Game of Thrones) told the Daily Star: “I would love to play Jane Bond.”

Anderson and Clarke may not seriously expect to become Bond stars, but the idea of gender-flipping a story about men is becoming increasingly popular—especially when it’s a character, like Bond, who is seen as appealing mostly to men. Most famously, this summer will bring a remake of the 1984 comedy classic Ghostbusters, where the only women were a secretary and a love interest. In the new version, by director Paul Feig, the Ghostbusters are all women and Chris Hemsworth (Thor) plays a token male.

Other traditionally male genres can be switched around, often by creating a female character who is a spinoff of an established male hero. The Canadian TV fantasy series Wynonna Earp is adapted from a series of comics about a young woman who is the descendant of Western hero Wyatt Earp, and takes on the role of a monster-fighting cowboy. One of the few shows about a female superhero is Supergirl, based on the comics about Superman’s female equivalent.

One commercial advantage of this type of work may be that, done right, it can have a broader appeal than movies with traditional casting. Romantic comedies starring women are often stereotyped as not being for men. But few people have ever said that about the old Hollywood comedy classic His Girl Friday, which adapted a play about two male reporters and turned one of them into a woman, creating a romantic comedy with a hard, cynical edge.

Ghostbusters, if it works, could help itself to the same kind of crossover audience. This is a title that has proven appeal to male viewers, but some men are complaining online about the change, including one who made a viral video called “Ghostbusters 2016. No review. I refuse.” But many more men might go and see a movie called Ghostbusters more eagerly than they would go to see another film with a mostly female cast.

The reaction to this type of story, though, can sometimes look patronizing. Genres aimed primarily at women, like romantic comedies or soap operas, have a problem being taken seriously, and a movie may be considered more respectable if it seems likely to draw a lot of men. Bridesmaids, the comedy hit that much of the new Ghostbusters team worked on, received praise for being unlike the typical woman-centred romantic comedy, and more like raunchy guy comedies like The Hangover. Katie Rogers, then of the Washington Post, summed up the prevailing attitude to Bridesmaids in 2011: “‘It’s a chick flick, but they’re acting like men, so guys will like it, too.’ ”

But the people who tell these stories are aware that there’s much more to it than a simple role reversal. “One challenge about writing a female character who is usually written as a man is that you can’t just put glossy locks and breasts on the masculine archetype,” says writer-producer Emily Andras, who developed Wynonna Earp for television. “You see this a lot in auditions too, when you’re gender-swapping an action hero—young actresses come in and basically do Clint Eastwood in a tank top.”

Done right, the point of this kind of storytelling is to give women access to stories that have been reserved for men—not to make them act like stereotypes, whether male or female. And sometimes the gender of the protagonist matters less than we think it does. “Give the audience interesting, flawed yet likeable [characters] and you could, in theory, be able to cast blind,” Andras says. She points to the 2010 spy movie Salt, which was written for a male star, but wound up “swapping out Tom Cruise, when he dropped out, for Angelina Jolie.” In a way, we already had Jane Bond—and it worked.