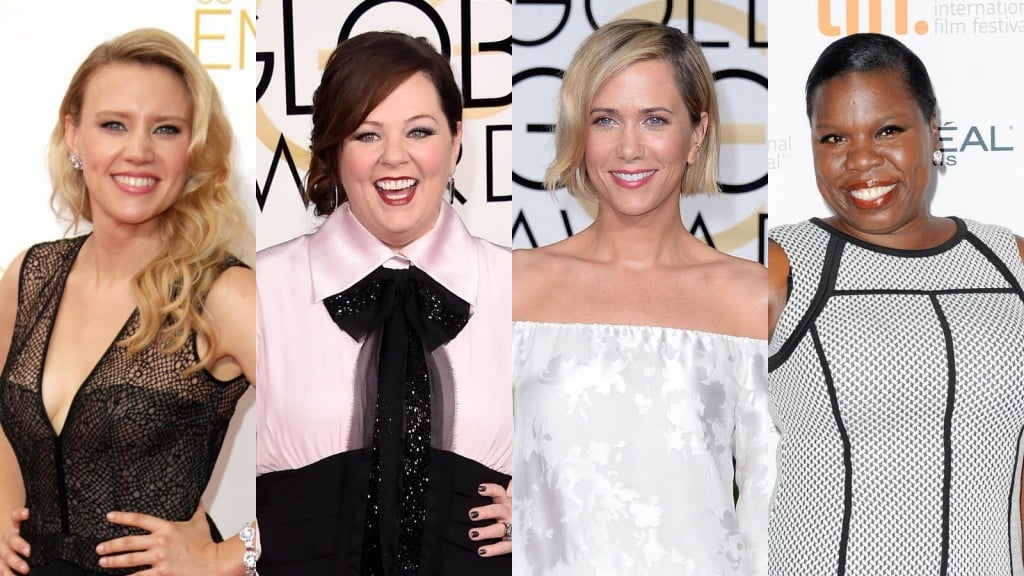 For a minute there, it seemed like a 30-year-old movie franchise had solved sexism forever. Director Paul Feig and star Kristen Wiig announced they were doing an all-female version of Ghostbusters as their follow-up to their huge hit comedy Bridesmaids, and the Internet rejoiced. There were some really stupid complaints from people who said ghost-busters must, by all that’s holy and true, be men, and the stupidity of those complaints led to even more Internet rejoicing over the project.

But then, the huge Hollywood studio, which giveth, showed how a huge Hollywood studio can also taketh away. Columbia/Sony announced that it’s also going to do a guy Ghostbusters movie right after the girl Ghostbusters movie. The studio, along with two of the old Canadians behind the original—Ivan Reitman and Dan Aykroyd—are trying to build a superhero-style franchise out of this old premise, and the idea, I suppose, is to have multiple movies with multiple ghost-busting teams.

If this idea comes to pass, it will considerably reduce the uniqueness of the all-female Ghostbusters. People were hoping the female team would be the new Ghostbusters, the one and only Ghostbusters, for our era, leading to a world where women are the first people our kids think about when they think about ghosts and the busting thereof. (Who knows, it might have even led to a world without corny puns on the word “bust.”) But now, it looks like it’ll wind up being just “the female Ghostbusters” in a larger movie universe. What could have been a transformation of the concept will instead be reduced to something like tokenism.

So the disappointment is easy to understand. People love Ghostbusters; it’s one of the oldest movies that’s still part of our increasingly time-limited cultural consciousness. And there’s no reason why the ghost-busters have to be men, except that the movie is a type of comedy that’s usually associated with male viewers and male audiences. Part of the point of Bridesmaids was to break down the barriers that usually separate “guy” comedy from “girl” comedy: It was a romantic comedy about a wedding, the ultimate description of a chick flick, but it had all the gross-out, hard-joke, R-rated comedy that the boys usually monopolize. Doing Ghostbusters seemed like a logical next step for Wiig and Feig, but it may be harder for them to overturn chick-flick stereotypes if the studio is already looking to cast a more traditional (i.e., male) set of ghost-busters to balance them out.

Related: Listen to Chip Zdarsky discuss race and superheroes on our pop-culture podcast

Probably, this just goes to show why we shouldn’t look to “all-female” versions of anything to solve Hollywood’s gender balance problems. Changing male protagonists to female is a perfectly good idea for a film, going back to His Girl Friday and beyond. But it does sometimes risk reinforcing the stereotype that the good roles are men’s roles, and that boys’ comedies are more legitimate than girls’ comedies. The resulting movie doesn’t have to be gimmicky; it’s just that the concept basically agrees with the prevailing idea that a comedy for guys (like the original Ghostbusters) is worthier than the types of comedies that have female protagonists to begin with. And that doesn’t solve the problem, which is not so much that Hollywood doesn’t have roles for women; it does, but the movies are dumped on as “chick flicks” and not taken seriously by much of anyone, including the filmmakers.

One of the wonderful and revolutionary things about Bridesmaids, again, is that it was a typical romantic comedy in plot and setting, but was treated with a respect that isn’t usually given to romantic comedies starring women. Reinventing Ghostbusters may turn out to be a great idea, but, as we see from the studio’s announcement, it’s not going to change the fact that studios think of “franchise” movies as largely about boys, for boys. And so the issue with modern Hollywood remains: Guy movies are always taken somewhat seriously; women can barely get respect, even if they’re playing roles originated by guys. Bridesmaids wasn’t enough to change that, but don’t blame Kristen Wiig or Melissa McCarthy or any of the other brilliant performers. They can’t do it on their own if the studios aren’t behind them.