Golden Globes shine on 'The Artist,' Gosling and Clooney

Why do the Globes treat 'The Descendants' as a drama and 'My Week with Marilyn' as a comedy? 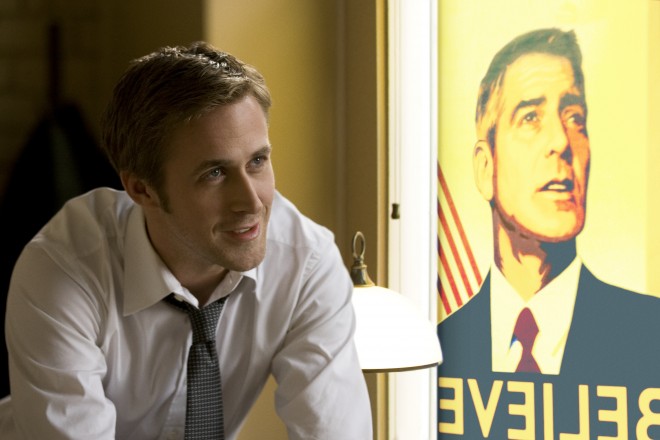 Ryan Gosling (in a scene from 'The Ides of March') will compete with 'Ides' director George Clooney, nominated for 'The Descendants'

The Golden Globes nominations were unveiled this morning, and The Artist—France’s silent black-and-white valentine to retro Hollywood—continues to charm its way down the long road to the Oscars by topping the Globes with six nominations. The Descendants and The Help are tied for second place with four nominations apiece. Both George Clooney and Canada’s Ryan Gosling are golden. Clooney snagged three nominations, as best dramatic actor for Alexander Payne’s The Descendants, plus best director and screenplay for The Ides of March.  Gosling was nominated in the comic acting category for Crazy, Stupid Love, and in the dramatic acting category for  Ides, which has him going head to head against with Clooney. Unlike the Oscars, the Globes break down the best picture and acting categories into dramas and comedies-or-musicals, which allows the Hollywood Foreign Press Association (HFPA) to better spread the wealth. But the rationale is often wonky. The Descendants, a quirky mix of comedy and drama, is classified as drama, presumably because someone dies; My Life With Marilyn was considered a comedy-or-musical, but though it’s got a couple of tunes, it’s not a musical, and despite some laughs, it’s much less of a comedy than The Descendants. Go figure.

The Globes gave a boost both to The Ides of March and The Girl With the Dragon Tattoo, which have been ignored by most of the critics’ awards. Tattoo‘s cyberpunk heroine, Rooney Mara, hacked her way into a heavyweight actress slate,  competing with Meryl Streep (The Iron Lady), Viola Davis (The Help), Tilda Swinton (We Need to Talk About Kevin) and Glenn Close (Albert Nobbs).

The most notable snub was ignoring Terrence Malick’s The Tree of Life, which won the Palme D’Or in Cannes and has been honoured by several critics’ groups, including the Toronto Film Critics Association. However, its star, Brad Pitt, was nominated for Moneyball in the dramatic acting category, along with Clooney, Gosling, Michael Fassbender (Shame) and Leonardo DiCaprio (J. Edgar). Honouring DiCaprio instead of Take Shelter‘s Michael Shannon underscores the HFPA’s tacky pedigree as a gang of junket whores who never saw a superstar they didn’t like. (If you think that’s too harsh, Ricky Gervais has said much worse things about the HFPA, yet they’ve hired him back to host the Globes, which adds a curious S&M kink to the junket whore role.)

Also snubbed is the brilliant work of Kevin Spacy and Jeremy Irons in Margin Call and Elizabeth Olsen’s tour de force in Martha Marcy May Marlene. And Steven Spielberg’s old-fashioned epic War Horse was damned with faint praise, receiving just one nomination for best dramatic feature, while being shut of the best director list, which includes includes Payne, Clooney,  Woody Allen (Midnight in Paris), Michel Hazanavicius (The Artist), and Martin Scorsese (Hugo). I guess Spieberg was too busy shooting Lincoln to court the HFPA.

Because the HFPA represents no one but a small group of over-entitled journalists, The Globes are an unreliable precursor to the Oscars. Their awards do, however, reflect the strength of various campaigns. And  awards, like elections, tend to be more about campaigns than merit. No one campaigns better than Harvey Weinstein, and he’s got backing some thoroughbreds, including The Artist, and the two strongest actress contenders, Streep (The Iron Lady) and Williams (My Week with Marilyn).

I won’t go into the television nominations because I’m not a TV guy. Besides, at the Globes the TV crowd is basically stuck at the children’s table.

Here is the full list of Golden Globe nominations:

“The Ides of March”

“My Week With Marilyn”

George Clooney (“The Ides of March”)

Ryan Gosling (“The Ides of March”)

Rooney Mara (“The Girl With the Dragon Tattoo”)

Tilda Swinton (“We Need to Talk About Kevin”)

Michelle Williams (“My Week With Marilyn”)

Kenneth Branagh (“My Week With Marilyn”)

“The Adventures of Tintin”

“The Flowers Of War” (China)

“In The Land of Blood and Honey” (USA)

“The Kid With a Bike” (Belgium)

“The Ides of March”

Paul Giamatti (“Too Big to Fail”)