Losing the guardian of happy endings 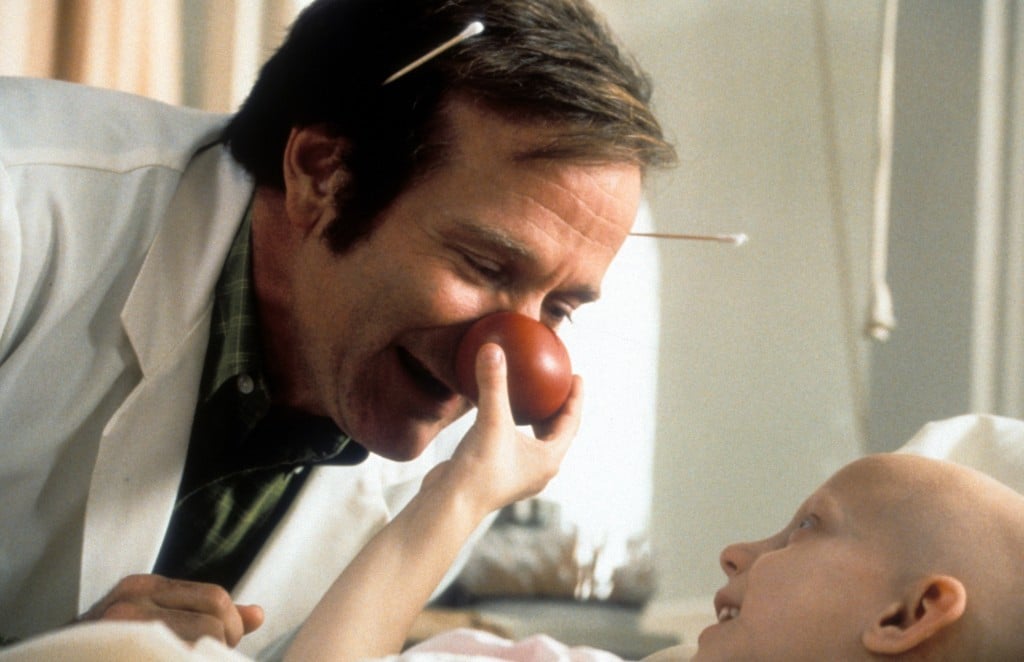 Robin Williams in a scene from the film ‘Patch Adams.’ (Photo by Universal/Getty Images)

A celebrity’s death is always noticed, but rarely felt. Comedian Robin Williams’s apparent suicide this week, by asphyxiation, at 63 years old, was felt deeply. It wasn’t the kind of famous death you regret for a minute, annotate into a saccharine Facebook status and soon forget. It was personal—especially if, like me, you were a child of the ’90s. I rented Williams’s schlockier films—Jumanji, Hook, Mrs. Doubtfire—on VHS almost weekly when I was a kid, until my parents put a household moratorium on the phrases, “Bangarang,” and, “I am Job.” Judging from the thousands of social media posts by other people close to my age—remembering Williams not merely as a brilliant comic, but as an important guiding force in their early development—I know I’m not alone.

Toronto R&B singer The Weeknd shared a photo of Williams on his Instagram and wrote a tribute to the actor on Twitter: “Thank you for my childhood memories, you’ve helped me at my darkest times.” Painfully cool actress Evan Rachel Wood, formerly Marilyn Manson’s main squeeze, wrote her own lovely, earnest missive. “Genie. You’re free,” she tweeted, alongside a photo of the big blue apparition from Disney’s Aladdin (voiced by Williams) holding the Arabian prince in a teary-eyed embrace. “Absolutely stunned and heartbroken,” she wrote. “He was a huge part of my childhood.”

Williams was a serious actor, and the roles that will immortalize him in the minds of critics are those in Good Will Hunting, Dead Poets Society and Good Morning, Vietnam. But the roles that immortalize him in the minds of my generation are his least sophisticated: Daniel Hillard in Mrs. Doubtfire, a middle-aged man in geriatric drag who teaches us (way ahead of his time) that families come in all different shapes and sizes; Peter Banning in Hook, an overworked lawyer turned oversized Peter Pan, who teaches us that family comes before monetary wealth; Professor Phillip Brainard in Flubber, who invents and befriends a Pillsbury Doughboy-esque creature made of green translucent goo; and Dr. Hunter Adams, in Patch Adams, an unconventional medical practitioner who indulges an elderly patient’s fantasy of swimming in a gigantic bowl of noodle soup, and teaches us that laughter is always the best medicine. If you grew up on Robin Williams, he wasn’t merely a manic comedian. He was the centre of your moral universe.

Now, in the wake of his death, we’re confronted with tears-of-a-clown conjecture about the bottomless sadness hiding behind so much comedic shtick, and the reality that the people who make us happy for a living are often profoundly unhappy themselves. Yet what makes Williams’s suicide especially devastating for those of us who grew up with his family films isn’t the sense that we’ve lost a razor-sharp wit, but a guardian.

I’ve been in therapy a few times in my life, and nothing has made me feel more suddenly safe and whole in the midst of a depressive episode than watching Mrs. Doubtfire on a Saturday morning. In university, my friends and I even had a name for this Robin Williams-inspired antidote to the blues: We called it Doubtfire Day—as in, “Hey, I had a really rough night, do you wanna come over for a Doubtfire Day?” For people of my parents’ generation, this incarnation of Robin Williams as cinematic chicken soup was a major comedown; for us, it was his major achievement.

In 2010, when English journalist Decca Aitkenhead asked Williams if making corny, family-friendly features of the Patch Adams and Old Dogs variety “offended” his sense of integrity, he told her he had no qualms at all about making silly movies. “I’ve had a lot of people tell me they watched Old Dogs with their kids and had a good time,” he said. “You know what you’re getting into. You know they’re going to make it goofy. And that’s okay.”

It’s okay to be goofy, and it’s okay to be unrepentantly sentimental. There’s no shame in doing something that brings people happiness. Robin Williams may have been a depressed, cocaine-addicted alcoholic. But he was never a cynic. And that’s why, I suspect, kids loved him so much. He was a constant comfort, his mere presence proof that a happy ending was just around the corner.

If only his magic had done for him what it did for us.