Escaping with Greeks vs. Google geeks: This week at the movies

Brian D. Johnson reviews 'The Internship' and 'Before Midnight' 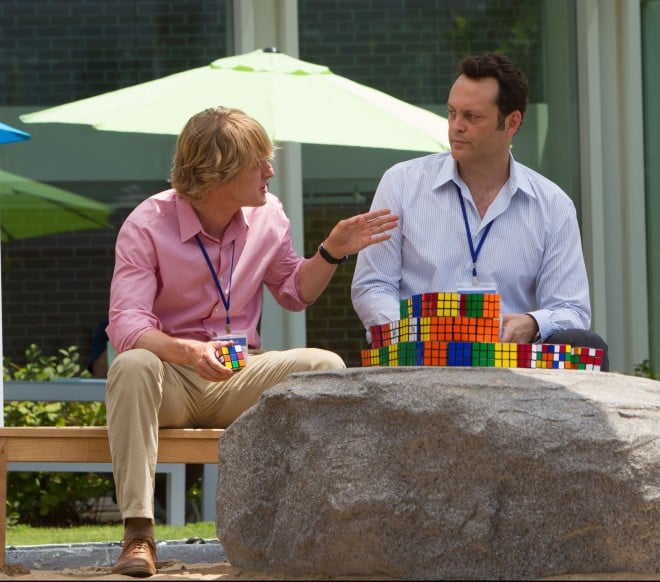 Movies can be a form of tourism, and this week offers a choice of touring the Google campus for a game of Survivor in The Internship, or watching a marriage come deliriously unglued on a Greek vacation in Before Midnight. A choice of geeks vs. Greeks. The former is a fish-out-of-water comedy from Hollywood; the latter is the third chapter of an intermittent indie franchise about a trans-Atlantic love affair. If you’re a grown-up, I recommend Before Midnight, an intense drama that catapults a relationship from blithe holiday romance to raw scenes from a marriage: it’s one of the best movies of the year. More on that in moment.

The Internship is tempting, I know: it has a hot premise and dynamite leads. You can just imagine the brain wave being scribbled on a napkin in the studio commissary: wedding crashers Owen Wilson and Vince Vaughn bring their old-school game to Google as overgrown interns fighting for jobs among the kids.

If only the movie was as nifty as its stars, or its setting. I can’t deny it has its pleasures, both guilty and innocent. To throw a profane spin on what we used to say about Marlon Brando, I’d be happy to watch Wilson and Vaughn play the phone book. Or a MacBook Pro. And who doesn’t want to take a vicarious tour of the fabled Google campus, where your browser’s Crayola colours come to life in an Emerald City of corporate geekdom? I visited the DreamWorks studio once, and Google looks like its kindergarten version—a workplace with nap pods, free food and playground slides between floors. But the stars are more fun than the movie—The Internship is no Wedding Crashers.

Billy (Vaughn) and Nick (Wilson) are two hotshot watch salesman who see their careers evaporate along with their company. As they look for work, Billy tries Googling Google. And as a diversity gesture, the company admits them into its intern program, a cutthroat team competition in which only one team will end up with jobs. Billy and Nick are techno-klutzes on a team of nerds. But they apply their jock bravado to galvanize the team’s spirit—an initiation that takes place at a strip club. The Internship wants to have it all: the revenge of the nerds and the jocks in one Hollywood app.

One reason the comedy lacks edge is that Google’s role verges on product placement, as the  ideology of ‘Googliness’—an official Google mantra—is embedded in the movie’s aspirational message. Canadian director Shawn Levy (Night at the Museum) seems to have drunk all the colours of the Google Kool-Aid. His Google-envy is all too transparent. They say Hollywood is high school with money; Google is Hollywood with monopoly money. “I think most of us were ready to quit our movie business jobs to go work there,” says Levy, “and a movie business job is pretty awesome.”

But the old school values of Hollywood formula prevail. The cast adds up to a rainbow coalition of ethnic stereotypes. And the villain, a young Euro-snot played by a sneering Max Minghella, is cardboard cliché. Wilson and Vaughn are great sports, but the gags are so broad it’s as if they’ve been demoted to comedy kindergarten. Oh yes, I almost forgot: Wilson rates a love interest, a workaholic Google employee played by Rose Byrne. But the romance is so perfunctory I wished I were watching Wedding Crashers 2 with Rachel McAdams. 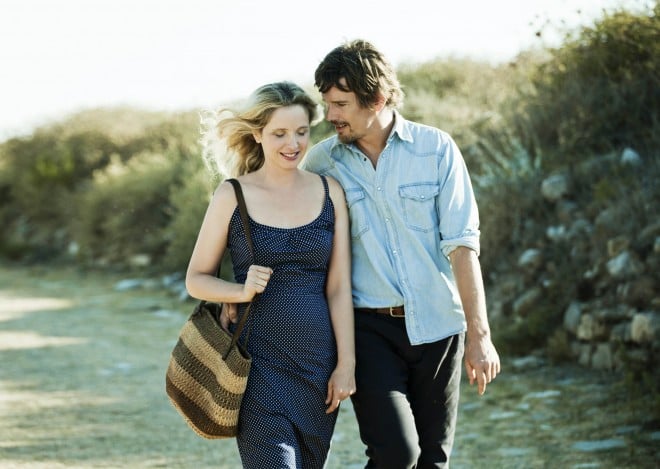 For those with a taste for films that deliver the drama of a relationship full-bore and unfiltered—it just doesn’t get any better than Before Midnight. This is the third installment of Richard Linklater’s delicious time-lapse romance/travelogue starring Ethan Hawke and Julie Delpy as Jesse and Celine—fractious lovers who walk and walk, and talk and talk, chasing each other’s tail in philosophical duels like existential flag-bearers for America and France, or Mars and Venus. First came Before Sunrise (1995), in which they walk the streets of Vienna after meeting on a train. Then came Before Sunset (2004), in which they walk through the streets of Paris in real-time, having met in a bookstore where Jesse is promoting a novel inspired by their previous escapade. The scenes unfold in long, uncut takes. The continuity is luxurious; each movie unfolds like a distillate of an entire relationship. Now, in Before Midnight, boom!—they are no longer on an endless date, but a married couple with twins, fraying at the seams during a villa vacation in Greece. And the intensity is exhilarating.

Whether or not Before Midnight culminates a trilogy (I could easily follow them for another decade or two), this is the strongest and most satisfying movie of the three. Like the others, it takes us deep inside the bubble of a relationship after some sturdy groundwork. We see Jesse bid a heart-breaking farewell at the airport as his son from a previous marriage flies home to his ex-wife in Chicago. As he joins Celine for the car-ride home, with the twins asleep in the backseat, they begin the slow-fused fight about careers and plans. (Does anything spell out the lethal difference between marriage and romance more than a long car ride versus a long walk?) Before we’re left alone with Jesse and Celine, there’s a literate dinner party back at the villa that wouldn’t be out of place in one of the Woody Allen’s postcard movies set in Europe. It makes us long to be in Greece. But then, thanks to a couple at the villa who have bought them a romantic night in a hotel, they set off on their own, kid-free, to face the straits of intimacy in a room that demands it. What begins with sex inevitably tips into a ferocious and protracted argument. And as a vision of conjugal hell, it’s pure bliss.

This time around, the balance of power between Hawke and Delpy is more even. In Before Sunset, the weakest of the three films, she argues circles around him while he turns into her dazed straight man. Here, he holds his own. Also, in the previous movies, their discourse darted about on streaks of bohemian whimsy, but finally there’s something substantial at stake. He’s gently asking if she would consider a move to Chicago so he can see more of his son; she is loath to give up a promising job offer to become an American housewife. While Jesse has the wind in his sails as a successful author, Delpy’s character, no longer young and slim-hipped, now has a bitter edge to her free-spirited feminism as she rattles the chains of motherhood and eyes the narrowing horizon of her career.

There’s a stunning veracity to their arguments, which are grounded in the kind of observational details that smack more of memoir than fiction. Somehow Hawke and Delpy convince us they’ve been together for all those years since making the last film.

Before Midnight is a great date movie—for a couple willing to risk getting locked in the kind of discussion after that may not end before midnight. And, although it’s early, I’d be surprised if it doesn’t end up on my top 10 list at the end of the year.

FILED UNDER: Before Midnight movies The Internship