Has Donald Trump caused an existential crisis for political satire?

Armando Iannucci's 'Death of Stalin' achieves the remarkable: hilariously skewering a murderous dictator. But even he thinks Trump may reveal comedy's limits 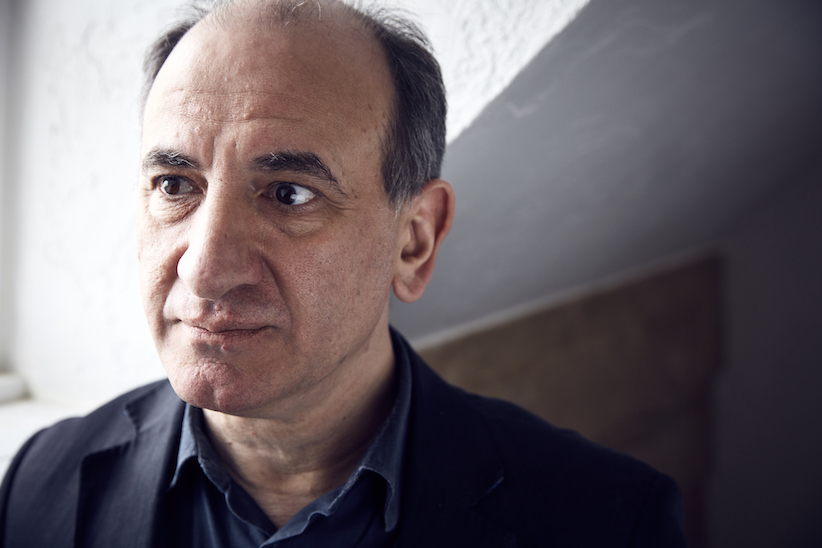 Director Armando Iannucci from the film ‘The Death of Stalin’ poses for a portrait in the YouTube x Getty Images Portrait Studio at 2018 Sundance Film Festival on January 21, 2018 in Park City, Utah. (Robby Klein/Getty Images)

In his non-fiction book The Gulag Archipelago, the dissident author Aleksandr Solzhenitsyn paints a scene wherein a Soviet party member called for a tribute to Comrade Stalin at the end of a 1938 conference in Moscow Province. Everyone leapt to their feet, offering “stormy applause.” It went on like this for five minutes. Palms swelled. Legs fatigued. But still, everyone clapped and clapped, each person afraid to stop applauding, lest they invite the wrath of their fickle, vain, murderous leader. “Nine minutes! Ten!” Solzhenitsyn writes. “Insanity! To the last man!”

“Nobody wanted to be the first!” cries the Glaswegian comedian Armando Iannucci, recalling Solzhenitsyn’s story over the table of a blindingly lit chain coffee shop in downtown Toronto. “The logical extension is that they must still be clapping.”

It’s stories like this—absurd, inane, improbably rooted in the history of the Soviet Union—that inform The Death of Stalin, Iannucci’s unlikely comedy about the madcap scramble for power that seized the Soviet politburo following the passing of Josef Stalin, out in Canada on Mar. 16. In North America, Iannucci is best known as a political satirist, thanks to the massive crossover success of the British parliamentary comedy The Thick Of It and HBO’s White House-set sort-of spin-off, Veep. Both shows exposed the hypocrisy—and straight-up hilarity—of democratic systems of government. With The Death of Stalin, Iannucci casts his caustic, absurdist eye on an even timelier political menace: tyranny.

Stalin and Sovietism feel like fair game for comedy. In the post-Cold War climate, “Soviet chic” has emerged as a nostalgic style in the West; indeed, following The Death of Stalin’s premiere at the 2017 Toronto International Film Festival, an afterparty was held at a moody bar upholstered with hammers, sickles, and oversized busts of Lenin, serving chilled vodka and rye bread rations. “He’s still part of the currency,” Iannucci says of Stalin. “Hitler is poison and toxic and evil. Stalin, because he was on the winning side of the Second World War, kind of got away with it.”

A ribald, vulgar comedy about Stalinism may scan as, to use the contemporary verbiage, somewhat problematic. The Soviet dictator is, after all, responsible for ordering nearly 800,000 executions, with historians estimating the total number of deaths under Stalin—from forced famines, gulags, and straight-up massacres—at anywhere between 9 and 50 million, a wild over-under that’s attributable to the spottiness, if not utter falsity, of Soviet record-keeping. What could be funny about one of history’s most notorious villains?

For Iannucci, the answer is: plenty. By rendering Stalin (Adrian McLoughlin) and his Central Committee higher-ups (including Steve Buscemi as Nikita Khrushchev and Jeffrey Tambor as Georgy Malenkov) as obnoxious, paranoid morons, The Death of Stalin poses compelling questions about the paradoxes of power. What happens when our leaders, elected or otherwise, forfeit any legitimate claim to power? What happens when tyrants, monsters and historical villains reveal themselves as clowns? Jokes, pretty much by definition, are all about exploring this incongruity between the appearance of a thing and a thing itself. And Stalin-style Sovietism—much more so than Hitlerian fascism, with its explicit economic and ethno-racial hierarchies—offers a mighty historical incongruity between its protestations of communist equality and its concentration of power in the hands of a maniacal ruling bloc.

While it’s hardly some kitschy lament for Sovietism itself, The Death of Stalin exhibits a different strain of nostalgia: for a simpler time where it was even possible to make jokes about politics, when daylight still passed between appearance and reality. For Iannucci, Donald Trump—whose election Iannucci refers to as “The Event,” as if marking an epochal shift) has precipitated a comedic existential crisis. Adored for being loud, crass and idiotic, Trump is essentially impossible to productively mock. “He’s a self-basting satirist,” Iannucci says, sounding more than a little exasperated. “Satire is all about exaggerating and distorting. That’s what he does anyway!”

Where someone like Stalin thrived on empty praise and unending ovations of stormy applause, Trump seems to gain power precisely from his opposition. This is a guy who regularly goes out of his way to sarcastically tweet holiday well-wishes to the “haters and losers.” Anti-Trumpers and the so-called “#Resistance” find themselves in an inverted, funhouse-mirror image of Solzhenitsyn’s scenario: jeering and booing until they’re hoarse, the leader’s megalomania only swelling in proportion to the screeching animosity.

Against the glut of hollow anti-Trump satire, Iannucci’s outlook is more modest, even a bit defeated. “I don’t think humour can change opinion,” he says. “It can offer you a new way of interpreting something. For all the jokes people make about Donald Trump, I don’t think it will change the opinion polls. I think that comes through argument and discussion.”

From one of the world’s most shrewd, perceptive, and deeply silly living comedians, The Death of Stalin offers a message that proves wholly dispiriting, even a bit cynical. “History does go in cycles,” says Iannucci, sounding a little bit like Karl Marx. “History has lessons for us. We’d do well to heed these lessons.” He calls the film “a comedy with a bitter aftertaste.”

There is more than a little bitterness in The Death of Stalin—and in the reception as it begins its theatrical rollout. The film was recently banned in Russia, with a spokesperson from the culture ministry claiming that it is “an insulting mockery of all the Soviet past, of the country that defeated fascism and of ordinary people, and what’s even worse, even of the victims of Stalinism.” There’s long been a historical tension in modern, post-Soviet Russia between the repudiated Stalin who murdered millions, and the glorious military genius who led (not literally, of course) the Red Army’s triumphant charge on Berlin during the Second World War—a campaign that was itself marked by millions of civilian rapes and murders. Current Russian president Vladimir Putin has called Stalin a “complex figure.” One may naturally balk at the irony of a modern tyrannical government banning a satire of an historical tyrannical government.

But then, that’s the thing, isn’t it? Tyrants have no sense of irony, no sensitivity to the patent obviousness of their own hypocrisy and, famously, no sense of humour. And what’s even worse: they don’t care. As much as modern audiences are hectored about the essential role of comedians and satirists—from Samantha Bee and The Borowitz Report through to Chapo Trap House and Iannucci himself—have in speaking truth to power, it often feels like cold comfort for the afflicted, who laugh in the dark.

Still: one plucky Russian art house cinema defied the ban, screening The Death of Stalin to an audience deeply familiar with the horrors of the Stalinist regime. Some in the audience who suffered under Stalin and his purges said they didn’t laugh, as if the absurd comedy played more like a horror film, or even worse, a documentary. When news about the ban came down, Armando Iannucci tweeted, “We remain hopeful.” And hope, we’re led to believe, is meant to be enough.