High concepts and a mixed bag

What a mixed bag of movies we have this week: a highland feminist fable (Brave), a quirky apocalyptic dramedy (Seeking a Friend for the End of the World), a presidential horror movie (Abraham Lincoln: Vampire Hunter), and a cottage love triangle (Your Sister’s Sister). Each story hinges on what Hollywood likes to call a high concept. Brave‘s family fable will, of course, leave the others in the dust at the box office. But if you’re looking for a good grown-up movie, see Your Sister’s Sister, by far the smallest of these pictures. It’s reviewed at the tail end of this blog. Now to business:

Brave
Much has already been made of the fact that Brave is the first Disney-Pixar movie devoted to a female protagonist, and that its fiery, red-haired heroine, Merida, breaks the passive stereotype of the Disney princess. But those aren’t the only things that are unprecedented about this animated feature. Brave is also the first Pixar movie that treats its kiddie audience with flashes of nudity— bare bums flashed below kilts, and a POV shot that dives headlong into the cleavage of a buxom maid. Which is not to say it’s more “adult” than previous Pixar fare. On the contrary, Brave is the broadest, most juvenile entertainment that the studio has produced, a movie that plays like a slapstick cartoon, without the layers of sophisticated adult wit that we’ve come to expect from the creators of  Toy Story, Ratatouille and WALL-E. Not that there’s anything wrong with that. But this Scottish fable is also the preachiest Pixar movie I’ve seen, a roaring adventure capped with the kind of heavy sentiment and sermonizing that we’d associated with old-school Disney—although the values being preached are more progressive.

Of course, I’m not the audience. This is a movie for kids. And maybe I’ve been spoiled by Swiss Army Knife marvels of family entertainment, spiked with myriad references that zoom over the heads of children and delight the grown-ups. One editor, in fact, asked me how I could possibly review this film without dragging along a child. Well, too bad. There wasn’t one available; I can see the movie only through these old and jaundiced eyes. Fortunately there’s no shortage of reviews on ye olde Internet.

What distinguishes Brave from many a Disney cartoon is that it’s an original fairy tale, not another pasteurized version of something by the brothers Grimm. It comes fully-loaded with myth and magic, but the modernity is built right in, not an aftermarket upgrade. Brave is a fable about mother-daughter conflict. Merida (voiced by Kelly McDonald) is a headstrong highland princess who’s coming of age armed with stellar skill as an archer and a fierce desire to decide her own fate. When her parents, King Fergus (Billy Connolly) and Queen Elinor (Emma Thompson) invited the scions of three rival lords to win her hand in marriage, she rebels. Her father, a bear-hunting braggart who, like many a sitcom dad, is a big, blundering oaf. Mom is the righteous force our heroine has to contend with.

Running away, Merida loses herself in an enchanted forest, where she stumbles upon a woodworking witch who offers her a spell to change her mother into . . . I suppose this is where I say spoiler alert! although it happens just halfway through the film. (Feel free to skip to to the next paragraph.) So Mom is transformed into Dad’s worst nightmare, a giant bear, and the rest of the movie is consumed with our heroine’s attempt to change her back—while repairing the mother-daughter relationship and achieving her hard-won liberty.

From what I could gather, the kids around me were lapping it up. Of course, they’re not that fussy. As long as the gags are good and the action delivers, they’re happy to watch. Like any Disney-Pixar production, this is well-crafted, boffo entertainment full of gorgeous visuals; it does does the job and more. Nothing I say will persuade prevent Brave from being a massive hit, or dissuade a parent from taking the kids. (And after The Hunger Games, the emergence of an animated female archery ace will have bow-and-arrow sales soaring across the land.)

Yet . . . call me picky, but it seems a shame that a movie devoted to demolishing an outdated stereotype of female subservience enlists legion hall of  hoary stereotypes to do so. And when you see a Pixar movie that careens between pratfalls and platitudes, you have to wonder who wears the pants in the Disney-Pixar marriage.

Seeking a Friend for the End of the World 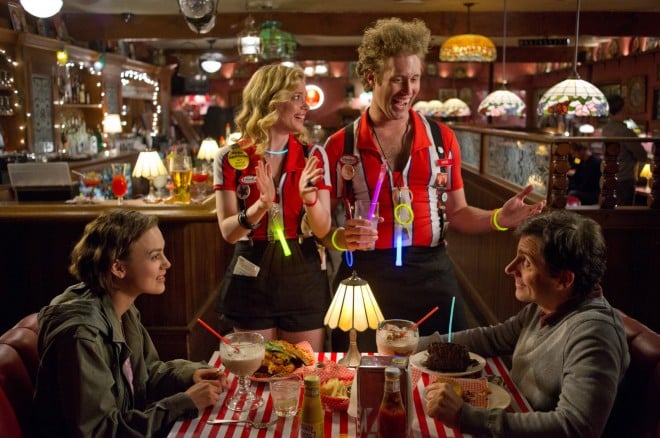 Kiera Knightley and Steve Carrel, with waiters on ecstacy, in 'Seeking a Friend at the End of the World'

When TV critics like the Globe and Mail‘s John Doyle rant about how television is infinitely superior to film, this is the kind of movie they can point to as evidence. The world is coming to an abrupt end in 21 days. Something about a 70-mile-wide asteroid that the space shuttle Deliverance failed to divert. Dodge (Steve Carell) is a mild-mannered insurance agent whose wife ditches him the moment the news breaks. As riots engulf his hometown, he escapes with his ditzy neighbour, Penny (Keira Knightley). He’s hoping to reunite with a lost love; she’s looking to rejoin her family. As days tick down to zero hour, Dodge and Penny  are gradually drawn to each other, although there’s no evidence of chemistry between them onscreen.

This feature directing debut by screenwriter Lorene Scafaria (Nick & Norah’s Infinite Playlist) is a jagged contraption of a narrative that never finds a comfortable or credible rhythm. As skittish as Knightley’s Brit mannerisms, it vaults from satire to quirky comedy to sentimental romance as the characters try to keep up. It’s as if the movie has obsessive compulsive disorder.

The satire has some bon mots and witty moments, as Dodge tries to, uh, dodge the hedonistic mayhem around him. Children are drinking martinis, adults are shooting heroin at dinner parties, and friendly waiters at a family restaurant are exceptionally friendly because they’re on ecstasy. No one’s worried about STDs, pregnancy or even incest. All bets are off.

Carell, the calm at the eye of the storm, plays it dead serious. He just keeps his head down and waits for all the stuff and nonsense to subside so he can finally play the tender romance that all this is leading to. Knightley, meanwhile, seems to be off in her own world, grabbing whatever acting moment comes her way. She devours a long, juicy stretch of dialogue, rhapsodizing about vinyl records, as if were her last meal.

If you want to see a movie about love at the end of the world, rent Don McKellar’s bittersweet Last Night (1998) which bears some surface resemblance to Seeking a Friend, but is far superior. Or, for a more harrowing experience, rent Melancholia (2011) by Lars Von Trier. When it comes to the apocalypse, you might as well go all the way. 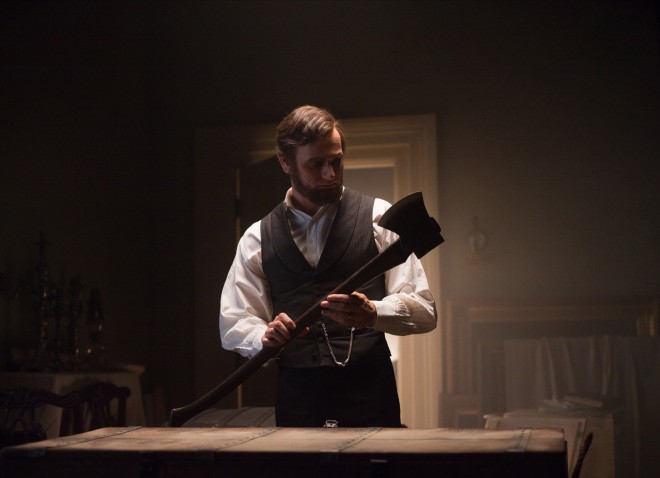 I had some hopes for this film, and not just because of the insane novelty of the premise—that before turning to politics, the young Abraham Lincoln had an active career as a Yankee samurai swinging a silver axe and killing vampires. The movie comes with a pedigree, that of Russian filmmaker Timur Bekmambetov, a skilled action director whose first Hollywood outing, Wanted (starring Angelina Jolie), was tremendous fun. And even if Abraham Lincoln: Vampire Hunter were bad, you’d hope that at least it would offer a trashy good time. Well, it’s bad alright, really bad, but not so abjectly bad that it’s good. With its wooden performances, sepia-tinted visuals, and a script full of leaden homilies, it suffers from delusions of cinematic grandeur. It’s not willing to accept its fate as a campy horror. In fact, it doesn’t seem to know what it is: the movie’s tone is all over the map.

Much of time it’s so portentous it cries out for parody. The dialogue is loaded with clunkers like “we’re all slaves to something” and “real power comes not from hate but from truth.” Vampires, it turns out, are the source of Southern Evil, the ultimate slave-masters . Even as a hatchet-happy child, this Abe is all about saving black folk. Problem is, the only black character is a Tonto-like sidekick who barely gets to speak.

It was Abraham Lincoln who said you can’t please all the people all the time, as Bob Dylan once reminded us. But Bekmambetov seems to be attempting to do just that. He flirts with Hollywood genres like a spoiled kid playing with toys then throwing them away. First of all we’re in samurai boot camp as Abe learns axe-swinging martial arts from his mentor, a “good” vampire (Dominic Coooper) who needs a human to wipe out his brethren (Vampires can’t kill vampires.) At another point, the movie briefly turns into a western, with a stampede of wild horses. These vampires are versatile. It’s not enough that they suck your blood and make you undead; they’ll throw a wild horse at you if you’re not careful. There’s also a big train scene. The action highlight of Wanted was a set piece on a train, but this one pales in comparison. What’s most surprising, given the director, is that the action scenes are tedious and unconvincing. Each slaying is punctuated by a slow-motion arc of dark blood, as if the same digital effect were plugged in time after time.

The movie sets itself up for a sequel.  The good news is that it’s  bad enough that we’ll be spared that fate. Then again, no one ever went broke underestimating the intelligence of the American people. I can’t remember who said that, but I’m pretty sure it wasn’t  Lincoln. 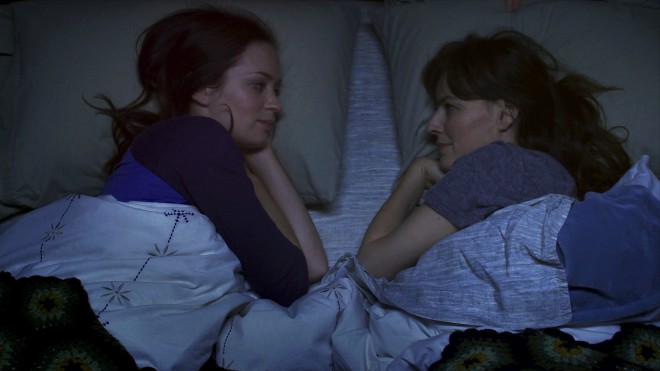 This low-budget indie gem is the smallest movie of those I’m reviewing this week, but for my money it’s the best. Like the others, it has a “high concept,” but it’s one that reveals itself far enough into the plot that it can’t be spoiled. In fact, the less you know about the story  better. I’ll set it up for you and go no further. In recovery from the death of his brother, Jack (Mark Duplass) takes up an offer from his best friend, Iris (Emily Blunt), to enjoy a reflective week of solitude at her family’s remote island cottage. When he gets there, he discovers it’s already inhabited by Iris’s sister Hannah (Rosemarie DeWitt). Tequila is poured, drunken sex is had. Then Iris shows up the next morning and the plot thickens faster than steel-cut oatmeal on a high boil.

Written and directed by Lynne Shelton (Humpday), this is one of those movies that skates the line between comedy and drama with such agility it seems to create its own genre. It’s a movie that’s all relationships all the time. The story is scripted but the dialogue is improvised, as a chamber piece performed by just three actors—a tiny-perfect triangle of emotional intrigue. The high-concept hinge of the story is a bit hard to swallow. But the complications are so juicy that you’re grateful to suspend disbelief. Or maybe I was just overjoyed to find myself trapped on an island with three seductive actors, and not a digital effect or a dumb joke for miles.