Fairy tales for all ages ask us to believe in a seafaring tiger, an Aussie Easter Bunny—and Jennifer Lawrence outstripping Bradley Cooper and Robert De Niro 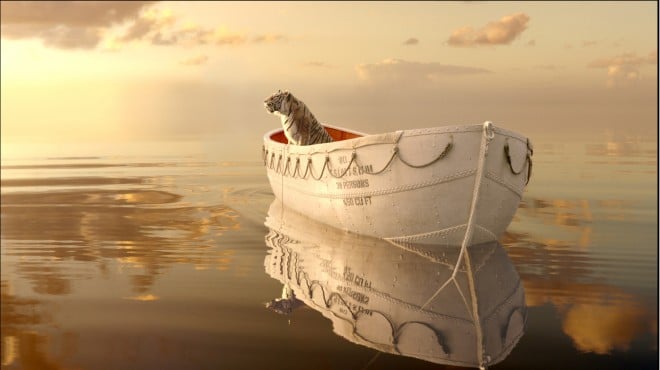 Thanks to American Thanksgiving, this weekend’s movies are opening midweek. They include two blockbuster 3D adventures suitable for the family—Life of Pi and Rise of the Guardians—plus Silver Linings Playbook, an off-kilter romantic comedy that is about family, but is not family entertainment. All three movies are about clinging to hope in the face of crazy odds. Which, of course, is where Hollywood and the holiday spirit find common ground.

Life of Pi and Rise of the Guardians offer, respectively, case-book examples of how to use and abuse 3D. Handling the medium for the first time, Oscar-winning director Ang Lee seems to understand that it’s best used as an immersive medium, one that can turn the screen into an aquarium, and is well-suited for water, which is both transparent and reflective. His is a live-action movie that employs a lot of computer graphic imagery (CGI), especially in bringing a tiger to life on a lifeboat. But the live action and  CGI swim together seamlessly, drawing us into the screen’s third dimension rather than reaching out to clobber us in our seats.  Rise of the Guardians, an animated feature aimed at children, uses 3D in a more military fashion, bombarding us with roller-coaster zooms and rocketing chase scenes that fly out of the screen.

Pi is scrupulously faithful to the prize-winning bestseller by Canadian novelist Yann Martel. That degree of fidelity can often limit a film’s potential. But Lee’s movie is the exception to the rule and achieves something the book can only ask us to imagine. Although the magic of Martel’s remarkable narrative is grounded in meticulous research and visual detail, it still requires a forceful suspension of disbelief: at moments, I still found myself thinking: “A boy sharing a lifeboat with a tiger? Really? Could that happen?” But by melding a CGI tiger with flesh-and-blood animals, Lee puts that tiger on the boat with such convincing power that we never question its existence.

It’s no small feat that the tiger is as believable as the humans. But the three actors who portray Pi (as a child in India, an adolescent boy on a lifeboat, and an adult raconteur in Canada) are all superb. Suraj Sharma, who makes his film debut as the teenage Pi, carries the much of the film single-handed—acting on water, in water, and with an animal co-star who was no more than a blue screen much of the time. It’s an extraordinary performance. And as the older Pi, veteran Indian actor Irrfan Khan anchors the narrative with a calm poise that personifies the transcendental clarity of Ang Lee’s direction.

It’s an exciting event when an auteur of Lee’s refinement creates a Hollywood spectacle with this kind of power. In a rare alignment of artistic vision and blockbuster ambition, Life of Pi stretches the horizon of cinema’s new technology to restore old-fashioned movie magic.

For more on Lee’s movie and my interview with the director, go to: A new life for Pi. 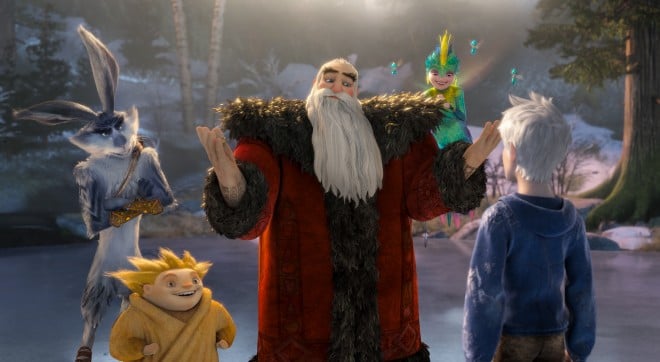 Rise of the Guardians

I’m sure this holiday extravaganza will be a big hit, and that kids will eat it up. But as much as I might try to simulate their point of view,  I can only see it through my own battered eyeballs, which feel like they’ve aged 10 years in the 90 minutes spent watching it. In hectic, repetitive chase scenes,  3D pushes the threshold of visual tolerance to the limit. Maybe for kids there’s no such thing as too much fast-moving eye candy. Vertigo, after all, is highly subjective; some people can’t get enough of roller coasters. So I’ll set aside that complaint for the moment and look at what else this picture has to offer.

It’s based on a children’s story by William Joyce—which was sparked by a question from his six-year-old daughter, who asked if Santa and the Easter Bunny were friends. Joyce spun that innocent query into a legion of fairy-tale superheroes called the Guardians. Their leader is a Santa stripped of his Norwegian provenance and re-booted as a Cossack gangster named North (voiced by Alec Baldwin), a brash godfather who rules a Yeti sweatshop at the North Pole. His fellow Guardians include an ornery Aussie Easter Bunny (armed with boomerangs and voiced by Hugh Jackman), a sweet hummingbird Tooth Fairy (Isla Fisher), a mute,  shape-shifting Sandman—and the freshly recruited Jack Frost (Chris Pine), a bratty lost boy who’s glum because children don’t believe he exists.

Like a superhero dream team of fairy-tale Avengers—or Xmas X-Men—the Guardians are on a mission is to keep children believing in them. With North as their crusty Jehovah, they wage a global war for the imagination. Their adversary is the bogeyman Pitch (Jude Law), who blackens the world with disbelief, unleashing a team of apocalyptic horses who could have galloped right out of The Lord of the Rings. The fight comes down to an existential clash between two outcast angels, the Christlike Jack and the satanic Pitch, mirror-image ghosts chasing different versions of their vanished childhood.

There’s a great deal of visual beauty and craft in the Guardians’ intricate toy-town universe. The script is hopping with ingenious wit. The action spits out gags at the industrial pace of the North Pole workshop. And a number of the characters are both richly drawn and drolly written, especially Jackman’s pugnacious Easter Bunny, who steals scenes like an Outback bandit.

But I found the film’s revisionist raison d’être deeply irritating.  If children are young enough to believe in Santa, the Easter Bunny and the Tooth Fairy, the Byzantine plot of this the fairy tale on steroids will only confuse them. If they’ve grown out of those beliefs, the movie is too busy promoting childhood innocence to restore it.  Just the notion that childhood imagination needs protection from a paramilitary force led by a Russian gangsta Santa is disturbing enough, never mind that the insidious voice behind bogeyman Pitch belongs to an actor who famously had an affair with his child’s nanny.

There’s something Orwellian about a movie that keeps telling you to believe. The Hollywood drummer boy keeps pounding home the fundamentalist faith of the Dream Machine: the message that fantasy needs to be enforced by doctrine, that magic is measured by firepower, and that good will vanquish evil with military honours. When it comes to spreading comfort and joy, these days it seems nothing short of an apocalyptic war will do the trick. 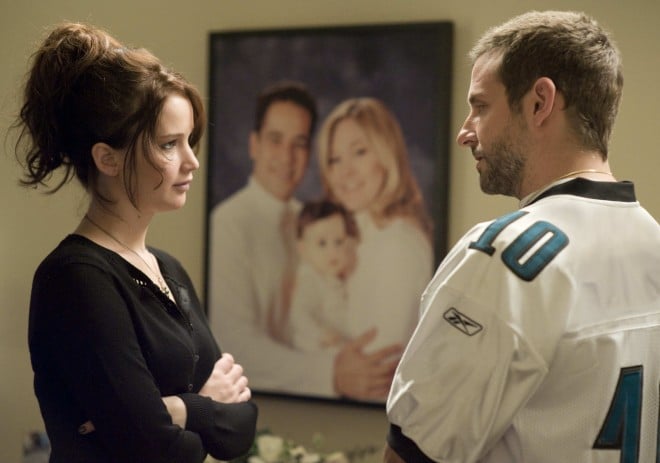 Here’s a fairy tale for the grown-ups, a date movie worth hiring a babysitter for, even if its adult characters do behave like children. David O. Russell (The Fighter, Three Kings) directs Jennifer Lawrence, Bradley Cooper and Robert De Niro in a back-handed romantic comedy that has fun with mental illness. Cooper, on the verge of being typecast as the World Sexiest Master of the Universe,  has re-purposed his alpha edge to play Pat, a human train wreck who has moved back into his parents’ home after being released from a mental institution. He’s lost his job and his wife—after a violent breakdown triggered by the wife’s adultery. Now, despite a restraining order, he’s determined to win her back. Pat finds an ally in Tiffany (Lawrence), a kooky Girl Interrupted who trumps him with her own record of mental delinquency, promiscuity and self-medication. She offers to serve as a go-between, relaying Pat’s deluded peace offerings to his wife, on the condition that he helps her compete in a ballroom dance contest. Big fat premise.

In an offbeat variation on his role in Meet the Fockers, De Niro plays Pat’s dad, a football fanatic with an arcane tool kit of OCD rituals for watching his cherished Philadelphia Eagles. While Pat’s mother (Jacki Weaver) helplessly tries to mediate the head-butting father-son conflict, this is a nuclear family on the verge of meltdown. Their antic scenes tend to slide into slapstick overdrive. But the volatile chemistry between Cooper and Lawrence is dynamite. By rights, this movie should belong to Cooper. Yet he’s merely the foil as Lawrence hijacks every one of their scenes with impeccable timing. After her Oscar-nominated role as an Ozark teen in Winter’s Bone, and her action-figure finesse in The Hunger Games, Lawrence reveals yet another risk-taking persona, one that cuts even closer to the bone.

Although Silver Linings Playbook is high-concept fare, it doesn’t feel formulaic. The story unfolds with such loopy, oddball energy that you almost forget it’s a romantic comedy until the fourth quarter. I can’t remember the last time I’ve been so effectively blindsided by emotion in a Hollywood movie—sacked behind the line of scrimmage. Perfect counter-programming for a Grey Cup weekend.