Hold onto your ruts: The consumerist nostalgia of 'Jurassic World' 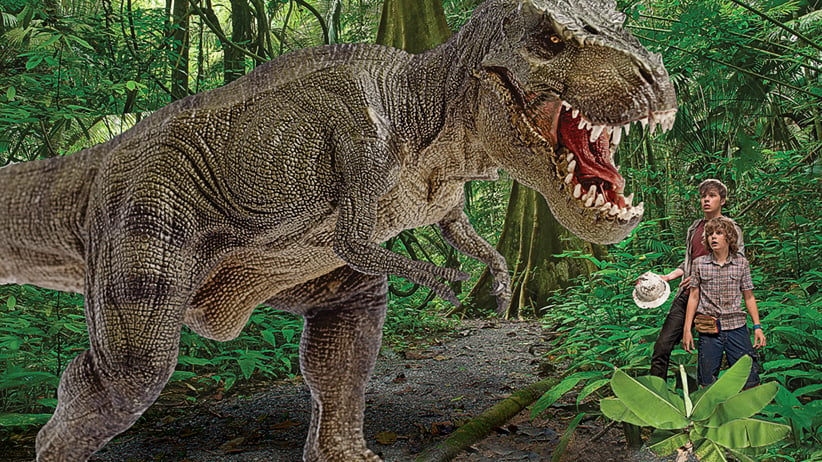 Steven Spielberg’s best movies can be easily distilled into their high-concept summaries: “A shark attacks,” “A boy finds an alien,” “A man finds a bunch of aliens.” And then there’s the one that’s so high-concept, it doesn’t even need a verb: “Dinosaur theme park.” Upon its release in 1993,  Jurassic Park became the highest-grossing film up to that point—and became a prototype for a new breed of blockbuster in which computer technology made the impossible possible.

The plan for the newest iteration of the dinosaur-theme-park movie—now hitting theatres as Jurassic World—was itself something of a runaway monster. Scripts were drafted, then scrapped. Actors and directors floated in and out of the project’s orbit. A few years ago, a script credited to indie filmmaker John Sayles leaked across the Internet, and introduced the ludicrous idea of a superhero squad of gun-toting dinosaur-human hybrids.

Related: Quiz: What did Jurassic Park get right on dinosaurs?

Their challenge was to find that kernel, what Silver calls “the golden idea.” Luckily, Spielberg had a golden idea of his own: a Jurassic Park movie where the park is finally open to the public. “It may seem like an obvious idea, in hindsight,” says Silver over the phone from Los Angeles. “But there have been three Jurassic Park movies, and this is the first when you actually see the park up and running.”

It’s a perfect metaphor for the summer blockbuster culture of remaking, reimagining and optimistic rebooting. Where 1993’s Jurassic Park worked as an allegory about the showiness of blockbuster filmmaking—with the well-meaning but arrogant park founder John Hammond (Richard Attenborough) standing in for Spielberg himself—Jurassic World feels almost like a meta-film, a commentary on that spectacle. In other words, despite the calamitous results in the original story, and the harsh lessons learned about nature’s tendency to spoil the best-laid plans of hubristic theme-park impresarios,  Jurassic World’s characters basically shrug and say, “Well, let’s just do it again.”

Jaffa admits there’s a certain familiar inevitability to Jurassic World, which introduces yet another dino outbreak, and yet another mad geneticist (Bryce Dallas Howard) playing God with prehistoric DNA. “You know they’re going to get into trouble,” he laughs. “It can only go one way, and that’s sideways.”

Then again, overfamiliarity is not necessarily a problem. Nearly all adapted blockbuster films cash in on an audience’s acquaintance with a franchise, and this summer’s slate sees those nostalgic impulses ramped up. From Jurassic World’s early trailer featuring a slowed-down, melancholic take on John Williams’s memorable piano theme, to the triumphant tagline, “The Park Is Open,” the new film trades explicitly on a certain warm and fuzzy reminiscence of the original. “Audience expectation is a good thing,” Silver explains. “When you’re really aware of it, you can use it to enhance whatever story you’re working on. The T. Rex isn’t just some surprise character that’s going to pop out. It’s something the audience is waiting for.”

Jurassic World—along with this summer’s forthcoming Terminator: Genisys, in which the time-travelling paradoxes of the Terminator movies are exploited in a way that seems to account for the plots of previous Terminator movies—suggest a new trend in blockbuster filmmaking. Instead of leaving that woolly sense of franchise nostalgia to colour the edges of a film, Jurassic World draws it to the centre, from the plotting (“Let’s just build another Jurassic Park!”) to the characterization, such as Chris Pratt’s dino-trainer befriending a pack of deadly velociraptors—the dream of all third-grade wannabe-paleontologists who wore out their VHS copies of the original Jurassic Park. (Jaffa and Silver liken the relationship between the raptors and Pratt’s character to Siegfried & Roy’s rapport with their tame Bengal tigers, which feels like a bit of a spoiler.)

It’s reminiscent of the trend toward acute self-consciousness in ’90s horror films such as New Nightmare, I Know What You Did Last Summer and, especially, Scream. In those movies, a working knowledge of genre was essential to the plotting—a move that film theorist Valerie Wee has, in her writing on the genre, termed “hyperpostmodernism.” Marketing for movies such as  Jurassic World, Wee says, tends to cast familiar franchise elements in new contexts, tapping into “a desire to re-experience a potent cinematic memory.” This sense of nostalgia, she also notes, is a way to build bridges between desired audience segments and misty-eyed fans of the original films, who drag their kids (or grandkids) to the cinema.

There’s an irony dormant in all this nostalgia, like a sickly mosquito trapped in lustrous golden amber. Upon its release in 1993, Jurassic Park was seen as an evolution—or genetic mutation—of Spielberg’s earlier monster-movie masterpiece,  Jaws. “All the imagination and effort (including 18 months of pre-production) that went into making the dinosaurs state-of-the-art exciting apparently left no time to make the people similarly believable or involving,” Kenneth Turan wrote in the Los Angeles Times.

Jaffa and Silver insist that the Jurassic Park films are about more than state-of-the-art special effects. Jaffa says the original film undermines the arrogance and intellectual vanity (a pet theme of Jurassic Park author Michael Crichton) of its dino-cloning scientists. “Thematically, we had a great place to start from,” he says. “Man’s hubris can be his downfall. These movies aren’t just spectacles.”

Perhaps. But these films have always been spectacles (very lucrative spectacles) first. And few movies gross a billion-plus dollars worldwide because of their sophisticated examination of man’s hubris. Considering the extensive franchising and merchandising—sequels, toys, video games, lunch boxes, pogs, sleeping bags, T-shirts and and, inevitably, a real-deal theme-park ride at Universal Studios—it’s tempting to see the figure of Spielberg less in the veteran showman John Hammond than in the teams of lawyers looking to milk his prehistoric resort for all it’s worth. As film critic Jonathan Rosenbaum wrote of Jurassic Park, “Within the first 10 minutes, you can tell that the characters who’ll be eaten are the ones who exhibit greed—not that this makes them anything like the director, who positioned the movie as the central unit in a line of merchandise, and even integrated [the movie’s] own advertising logo into the plot.”

For kids coming up in the early ’90s (this author, for example),  Jurassic Park wasn’t just a first brush with big-screen blockbuster spectacle, but the first chance to be properly situated as a consumer, padding out Christmastime wish lists with requests for Jurassic Park toys,   Jurassic Park pyjamas, Jurassic Park anything.  Jurassic World may just be the latest “unit in a line of merchandise.” But the way it plays so directly to foggy-headed childhood nostalgia makes it easy to forget this.

The excitement of seeing Pratt ride a motorcycle flanked by raptors, or a pterodactyl swoop down and pick up a screaming park-goer, or the way those iconic Jurassic Park gates, emblazoned with the franchise’s own logo, swing open: That’s not about appealing to an audience’s, or a generation’s, collective nostalgia. It’s about manufacturing it.

Even more than wanting to experience the latest reworking of a familiar franchise, it now seems audiences will pay just to tap into their wistfulness for the original, hoping to rekindle some faraway memory of uncynical blockbuster spectacle—even if such a pure, unadulterated experience never really existed in the first place. Welcome to the summer of hyper-nostalgia. The park is open.