An Oscar win—then a marital, spiritual and career crisis. Haggis plumbs it all in his new film. 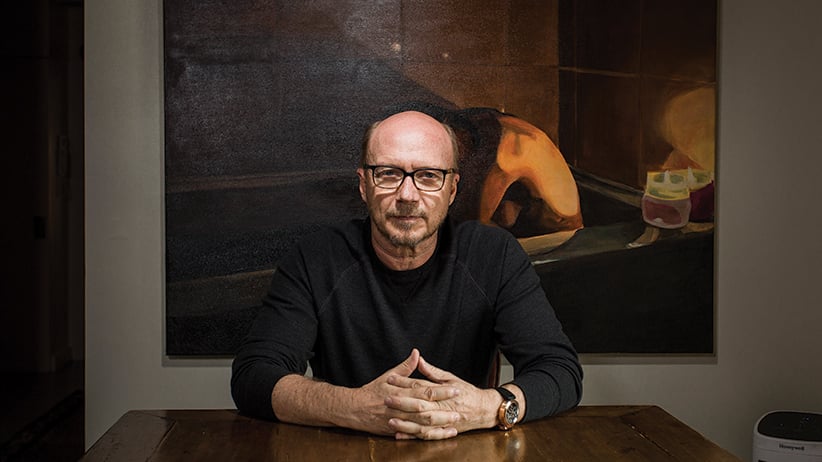 In Paul Haggis’s new film, Third Person, the central character is a Pulitzer prize-winning novelist named Michael. As played by Liam Neeson, Michael is a classic portrait of midlife crisis: a once-feted genius who is struggling to write a heartfelt memoir, but just can’t shake the reputation of his earlier work. Neeson’s heavy eyes, world-weary expressions and tense body language expertly sell Michael’s descent into creative purgatory. But as the creation of the Academy Award-winning filmmaker behind Crash, Neeson’s character can’t help but signal something else: Haggis’s own struggle. After nine long years of failing to deliver a hit, the film’s writer-director seems desperate to convince the world that he still has what it takes. By the time Michael slams his laptop shut and races through his Paris hotel in a last-bid search for inspiration, it’s clear Paul Haggis is the most frustrated man in Hollywood, and he doesn’t care who knows it.

It wasn’t supposed to be this way for Haggis. After Crash won a surprise Best Picture statuette at the 2006 Oscars—just a year after Haggis was nominated for Best Adapted Screenplay for Million Dollar Baby—the London, Ont.-born filmmaker should have been the industry’s golden boy. That Crash was his first film as a director furnished him with a bonus working-stiff-makes-good back story. Yet as the film aged, and the critical legacy of its Oscar competitors Brokeback Mountain and Capote grew, it acquired a sour aftertaste. Just months after that triumph, Hollywood developed a sudden and violent case of Oscar-night remorse, with many jumping up to declare Crash a treacly, simplistic and shameless mistake. The culture website The Awl dubbed it “the most loathsome Best Picture of them all,” while The Atlantic bluntly labelled it the “worst movie of the decade.” Crash became a dirty word.

“The movie just angers you, because everything is on the surface,” says Tim Grierson, vice-president of the Los Angeles Film Critics Association. “There’s an emotional sincerity to it, but also a falseness. The game is rigged in terms of how Crash goes about creating emotional reactions from the audience, who are basically congratulated for being much more enlightened than the horrible and racist characters in the movie.” Hollywood historian William J. Mann outlines another objection: “We all looked back and said it was a well-crafted film, but it took the easy way out. It went for emotion, but not as subtly or powerfully as it should have. Any film that has to stand the test of time has to take chances, and Crash did not.”

Hatred for Crash runs so deep that Haggis’s follow-up film, the murder mystery In the Valley of Elah, was met with either a collective shrug or outright disdain. This despite the fact that it’s actually the director’s best work, a searing take on honour and guilt that is subtle and delicate. The same venom was spewed at Haggis’s The Next Three Days, a crackerjack caper flick starring Russell Crowe that deserved better than its 52 per cent rating at Rotten Tomatoes and a $21-million take at the box office.

At the same time as his directing career was floundering, Haggis was also in the midst of a profound spiritual crisis, one that not only rocked his personal life but sent tremors throughout Hollywood. In 2009, after 35 years with the Church of Scientology, the filmmaker abandoned the controversial organization, accusing it of homophobia and decrying its policy of “disconnection,” in which followers are forced to break off contact with family members who criticize the group. Haggis’s bold open letter to the head of the Church—which led to a doorstopper of an article about him by Lawrence Wright in the New Yorker, followed by Wright’s revelatory book about Scientology, Going Clear—was devastating.

The tumult seemed to take its toll on Haggis. Although he was producing an impressive number of screenplays—including scripts for Martin Campbell’s Casino Royale and Clint Eastwood’s Flags of Our Fathers—by the time Haggis sat down to write Third Person, he could barely get a page right. “This was 2½ years, six days a week, six to eight hours a day, of sitting by a computer and getting it wrong,” says Haggis. “It was just sitting there suffering—suffering because of my own inadequacy as a writer.”

The struggle was uncomfortable, but also familiar from his days running television series, where every decision is second-guessed and the only way to produce anything is by sheer force of will. “He set enormously high standards for himself. We worked like Trojans, often literally around the clock because Paul would never leave a scene until we felt we’d hit it,” recalls Paul Gross, star of Haggis’s Mountie-out-of-water series Due South. “As hard as we worked, he worked twice as hard. In fact, I’m not sure he ever slept. He had two assistants who would swap 12-hour shifts just to keep up with him.”

As he did when he ran Due South—and EZ Streets and Family Law after that—Haggis eventually made it through Third Person, adopting Crash’s every-character-is-connected format along the way. Thus the tale of not only Neeson’s struggling author, but those of a recovering drug addict (Mila Kunis) fighting for custody of her child and a corporate spy (Adrien Brody) smitten by a con artist. The characters may not have been particularly original, but they were written with enough compassion, nuance and opportunity for scenery-chewing to attract an A-level cast. “Paul draws on everything in his scripts,” says Neeson, who previously worked with Haggis on The Next Three Days. “All you have to do is breathe the script, and trust the fact that this is enough.”

Whether it will be enough for audiences is another matter. Despite Haggis’s unforgiving work ethic—“I wrote and rewrote and rewrote, and the stories all changed radically each time,” he says—his product ultimately falls short. In the film, Michael, like Haggis, has recently separated from his wife, and the film’s complicated thesis on love—sometimes, it’s just not worth fighting for—plunges audiences uncomfortably deep inside the director’s brain. “It’s easy to say that I’m a writer and so is Michael, and it’s true, there’s a lot of me in there,” Haggis admits. “I was exploring things that were very difficult for me, things I didn’t understand about love and relationships. My personal life is all over this movie.” But Haggis’s decision to mine so many of his own failures for the new ﬁlm—whether it came from an attempt to counter criticisms that Crash was emotionally shallow, or from a desire to exorcise the demons in his own life—carries the distinct odour of self-indulgence. It doesn’t help that he returned to a style of ﬁlmmaking—the faux profundity of the multi-story Crash—even though it was decried over and over for almost a decade.

Sensing blood in the water, critics pounced on this transparency after the film’s premiere at last year’s Toronto International Film Festival. Indie Wire called it “an audacious failure,” noting the script’s “glib thematic undercurrent,” while the Guardian went one brutal step further, calling it “a work of staggering trash.” (The largely local audience, Canadian to a fault, politely applauded their close-to-hometown boy when the credits rolled.) It even took two months after its TIFF debut to nab a distributor, a surprisingly long time for a picture with such a high-profile cast, and a presumably A-list director.

A recut of the film—Haggis added a lengthier ending when he took it to the Tribeca Film Festival this spring—may repair some harm. At the very least, Third Person will attract moviegoers interested in something this summer other than Spider-Man or a talking raccoon. “There’s definitely a serious, adult audience for this movie,” says Grierson. “But it’s going to be hard to imagine it will generate anything close to the level of awards-season buzz that Crash did.”

Even if Third Person doesn’t succeed, Haggis always has the world of television. He recently signed a deal to develop a drama called Lords of Opium for CTV, the network that once broadcast his beloved Due South. Although the small-screen world of Canadian TV is a smaller pond, Haggis’s return is a vote of confidence by homegrown networks eager to up the ante in their evolving battle with U.S. networks. It may also be a more appropriate venue for Haggis’s larger-than-life characters and plot twists. “We are more inclined to accept certain plot devices and gimmicks in TV dramas than a two-hour movie,” says Grierson. “Plus Haggis will always be able to say he’s an Oscar-winning filmmaker. He will always have that to open doors.” He just might not want to mention the C-word.