In the hands of Denis Villeneuve and Ryan Gosling, the sequel to a cult classic about an American dystopia becomes a bold arthouse blockbuster

Just when you think America couldn’t get any darker, Blade Runner 2049 lands with eerie timing, especially considering it took 35 years for this massive sequel to materialize out of one of Hollywood’s most revered cult films.

The movie, which opens Friday, takes us back to the future, to a Los Angeles wasteland cloaked in a toxic shroud of smog three decades after the original took place, and to a ruined Las Vegas where flickering holograms of Sinatra and Elvis play for no one in a derelict casino. Roaming through this barren landscape is a lone figure in a long black coat, a Man With No Name but K. He’s an LAPD blade runner from the next generation, hunting illegals, those pesky non-humans hiding in the ruins. He’s also searching for his identity, the ultimate stranger in a strange land.

So perhaps it’s fitting that he’s played by an outsider, Canadian Ryan Gosling, and directed by a compatriot, Denis Villeneuve. Between them, if the film is a hit, they will have pulled off a rare fusion of cinema’s estranged realms—the art film and the blockbuster—with perhaps the most audacious and unlikely arthouse blockbuster since the 1970s heyday of big-budget auteur movies.

“No one noticed that the movie was hijacked by two Canadians,” says Villeneuve, laughing. On the phone from his hometown of Montreal, he sounds both exhausted and exhilarated, as if he’s just pulled off a major heist. Even he doesn’t know exactly how much Blade Runner 2049 cost, and figures it’s somewhere between $150-million and $180-million—”the figures are changing all the time depending on you talk to.” But the director, who turns 50 today, sounds less concerned about the commercial risks than the pressure of honouring the pedigree of the original. He’s gone out of his way to make a film that doesn’t pander to Hollywood formula. Running 46 minutes longer than the original, this work of staggering beauty is neither an action movie nor a thriller, but an existential mystery set against empty landscapes that stretch across so much empty space and wordless soundscape it feels closer to the auteur visions of Andrei Tarkovsky or Michelangelo Antonioni than to blockbusters by James Cameron or Steven Spielberg.

“It’s so funny,” he says, recalling the moment after he’d showed the final cut to his producers. “They were very supportive. Instead of being worried, they said ‘We love your director’s cut,’ and then with a big smile one of them said, ‘We just produced the most expensive arthouse movie ever made!’ ”

MORE: The arrival of Denis Villeneuve

The project has long been cloaked in secrecy. And after an early preview screening, film critics were met by a squad of publicists who read out a detailed list of spoilers not to be revealed, including plot points, character descriptions and surprise cameos. They said the edict came from Villeneuve himself, who wanted the audience to experience the film cold, just as we had. But no one said we couldn’t spoil the movie’s weather. Or the fact that Gosling wanders through its post-apocalyptic barrens in austere silence for much of its 2¾-hour expanse. Or that, in addition to the dark rains from the original Blade Runner, Villeneuve has shrouded his future Los Angeles with snow-filled, silvery grey skies that look, well, Canadian—relieving the American darkness with a northern light.

Villeneuve clearly relishes the notion of bringing snow to L.A., and sending a distinctly Canadian chill through an American classic. “But that’s the way I was able to make it,” he explains in all seriousness. “I had to bring something from home to that universe. And we have a very intimate relationship with winter. The idea that California would be struggling with winter was a key element, a template for the movie.” 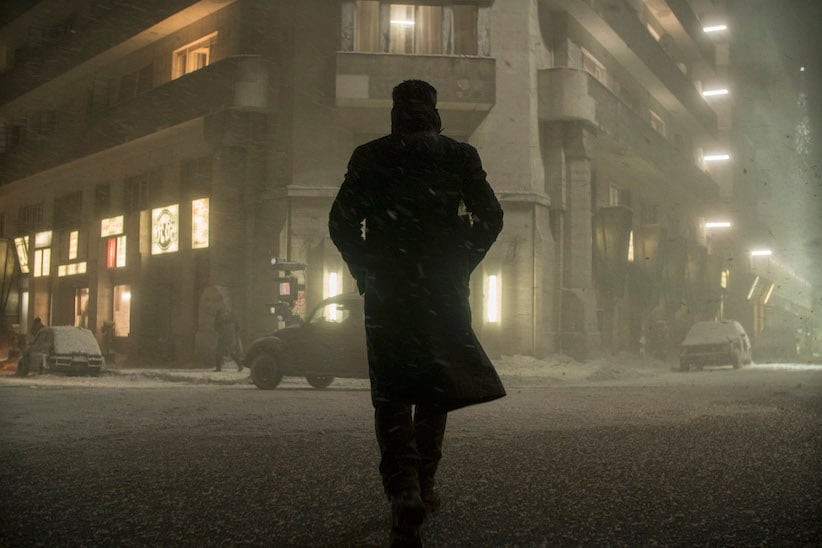 It’s certainly not your typical sequel. Arriving 35 years after Ridley Scott’s Blade Runner—a cinematic landmark that rose from box-office failure to cult phenomenon, spawning a whole new genre of sci-fi noir—Blade Runner 2049 is the year’s most keenly anticipated studio release. Unlike most sequels, which aim to erect a commercial franchise, this is more like a temple built around a sacramental time capsule. Even the film’s release date, 6-10-2017, is carved into a mysterious artifact, a small toy wooden horse that serves as the Rosebud in the film’s narrative puzzle. But then, this movie is about time as much as anything else.

It’s a period piece that takes place in the ruins of the future. Set in and around 2049 Los Angeles, it seems to belong to an older world, ravaged by climate change and environmental toxins. Corporate technology is more advanced, but both nature and civilization are severely degraded. Without spoiling any plot points, here’s the premise. An electronic “blackout” in 2020 crashed markets and destroyed the economy. Out of the debris, a blind scientist named Niander Wallace (Jared Leto) has genetically engineered a new Nexus 9 line of more obedient replicants to replace the outlawed breed of retired biorobots. As the successor to Harrison Ford’s Rick Deckard from the original, Gosling’s LAPD blade runner K hunts and kills illegal old-model replicants that have gone into hiding. He lives a bleak existence in a dingy apartment, finding moral and sexual support from an infinitely compliant hologram of a girlfriend (Ana de Armas). Other female characters tend to be more ruthless, from K’s hardboiled boss (Robin Wright) to the dominatrix-like enforcer who serves as Wallace’s right-hand woman (Sylvia Hoeks).

With executive producer Ridley Scott’s blessing, Villeneuve says he tried to honour the original while creating a film with its own identity. Scott summoned the original screenwriter, Hampton Fancher, to invent a new story, which he wrote as a novella that Michael Green (Alien: Covenant) turned into a script. Scott also pushed a skeptical Ford to revive Deckard in a supporting role, which Ford accepted after reading the screenplay and proclaiming it “the best script I’ve ever read.”

But it was Villeneuve who first thought of casting Gosling as the lead. He shoulders the entire movie, and is in almost every shot, says the director. “You need a great actor, who’s able to convey a character going through an existential crisis, and a lot of those emotions will be silent. He needs to do as little as possible, a bit like a Clint Eastwood performance, very stoical and taciturn, without words.” Then he adds, “Some actors are good actors by acting in front of the camera. Others are good by being in front of the camera, like Benicio Del Toro. Ryan has that same strong quality. He’s also an actor who will not melt when he’s in front of Harrison Ford. I needed someone who would be able to throw back the ball, and bring that beautiful melancholia that was present in the first film. I knew that Ryan had all that inside of him.”

Another issue that not every actor looks like he belongs in the Blade Runner universe. “It’s like a period movie,” says Villeneuve. “Even the extras, I’ve never worked so hard casting every single extra. Some fit, others didn’t. Ryan fits. He was definitely in the DNA of this world.” 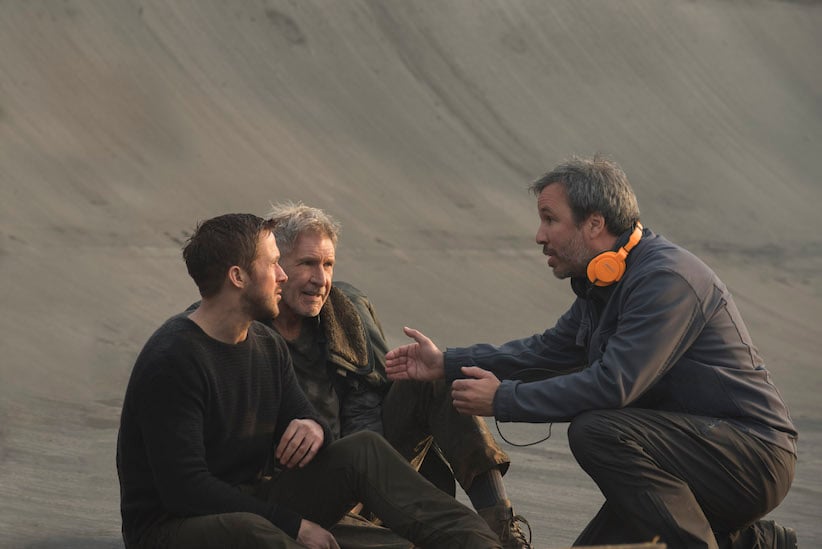 With Ford, the director inherited a hot-wired bundle of vintage DNA from the original film. As Deckard, his character has been off the grid for three decades, holed up in an abandoned bar in Las Vegas, now a ghost town. In Ford’s inevitable showdown with Gosling, he emerges a mad recluse holding court like Kurtz without a kingdom, his thousand-yard stare burning from a crooked face gnarled with paranoia. It’s as if he is the ultimate gatekeeper, defending the original Blade Runner from the next generation. And if any member of the cast seems likely to win an Oscar, it’s Ford, if only for the sentimental weight of his performance.

Villeneuve says he had to work out some “hard questions” with Ford, which he says he can’t discuss without divulging spoilers. “But we can talk about his mental state,” he says. “How do you find this character that would have been running away for 30 years? How vulnerable he would be, how disconnected from reality? We didn’t do any rehearsals, because Harrison hates rehearsals. I’m not a big fan of them either. But there were really long discussions. We had time on set. It was the kind of movie where we had the right schedule with the right amount of money to do things. I was not rushed.”

What Villeneuve is more than happy to talk about is the film’s extraordinary look, and the impressionist lighting created by Roger Deakins, his cinematographer on Prisoners and Sicario. In 2049 the Los Angeles air is more toxic than ever, and the film’s atmosphere, which ranges from tobacco-yellow smog to pearl mist, is so thick you could cut it with a knife, like a J.M.W. Turner painting come to life. “Roger is someone who sees light in a different way than other human beings,” says Villeneuve. “Light is palpable to him. It’s something he feels. I said to him right at the start, ‘You have an opportunity to do something you have never done before. You can create your own logic. You can be your own God.’ ”

While meeting with Deakins in Montreal in the dark months of November and December, the director said that he introduced him to “the Canadian silver light that I love so much, and what I deeply love about Deakins is that once I expressed that idea, he fought until the very last second to keep it alive. Ryan Gosling used to say he loved to come on the set once Roger had lit it, because there was something happening then that was unbelievable.”

Blade Runner 2049 may finally be the film for which Deakins wins the Oscar that has eluded him after 13 nominations for best cinematography, which include his last two ventures with Villeneuve as well as the James Bond movie Skyfall. And with any luck, they may get to work together on the most durably replicating movie franchise of all time: Daniel Craig, who holds considerable influence as its current star, recently named Villeneuve as his first choice to direct the next Bond movie.

“I can’t comment on that,” says Villeneuve. “I know they are talking to a lot of directors.” To take on such a challenge, of course, he would have to succumb to commercial formula for the first time in his career. But it’s a prospect that clearly tempts him. “The thing is, Bond is an old, old wet dream for me,” he admits. “How can you describe it otherwise? It would be an opportunity to approach filmmaking in a pure, playful way. It would be like playing with massive toys. But it all depends on the schedule.” Then, as our time expires, and he apologizes for cutting the conversation short. “Right now I need to release Blade Runner, sleep a little bit, and see what happens.”