How 'Inside Out' turns kids' movies on their head

Friendship in the face of evil is the key to most children's films. But Pixar's 'Inside Out' ignores the formula—to huge success 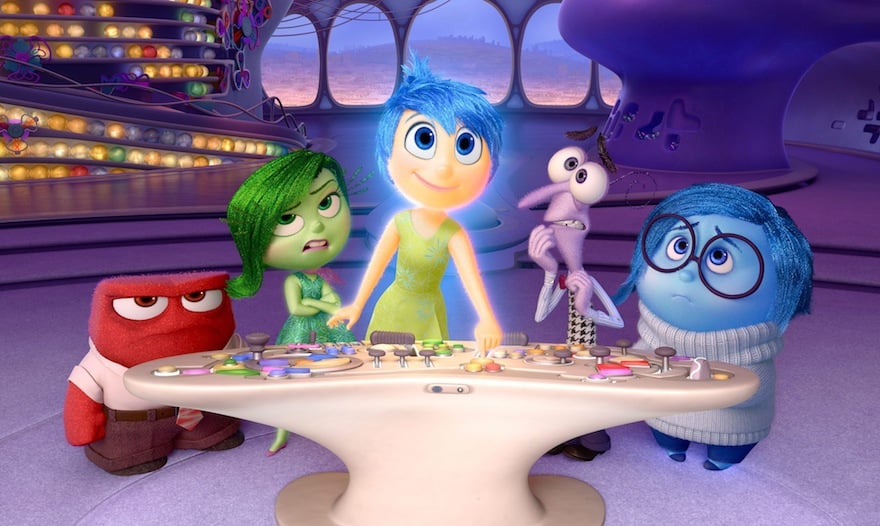 In this file image released by Disney-Pixar, characters, from left, Anger, voiced by Lewis Black, Disgust, voiced by Mindy Kaling, Joy, voiced by Amy Poehler, Fear, voiced by Bill Hader, and Sadness, voiced by Phyllis Smith appear in a scene from the animated film, “Inside Out”. (Disney-Pixar via AP, File)

Most kids’ movies have one thing in common: teamwork. In Toy Story, feuding figurines Woody and Buzz must overcome their differences in order to survive their owner Andy’s big move. In Finding Nemo, a group of quarrelsome fish band together in order to break free from their dentist captor and return Nemo, a wayward clown fish, to his father. Even in creepier fare like Witches and Jim Henson’s The Dark Crystal, friendship wins out over discord so that the good guys can defeat the bad guys. Friendship in the face of evil is key to the children’s movie formula. Which is why Pixar’s newest blockbuster, Inside Out, is such a revelation. Directed by Pete Docter (who also directed Up in 2009) Inside Out turns the standard formula on its head. It isn’t a story about a group of people coming together to save the world. It’s a story about a single person trying to save herself.

Inside Out takes place almost exclusively inside the mind of Riley, an 11-year-old girl who likes to play hockey (a rarity for a female character in a kids’ movie, or really in any movie). Riley is perfectly happy and well-adjusted until her family moves from Minnesota to San Francisco, a hockey-free wasteland where all the pizza has broccoli on it. We get to know Riley through her emotions—represented by fairy-like creatures that man her mind at a control panel, as astronauts would man a space ship. There’s Joy (Amy Poehler), Sadness (Phyllis Smith), Anger (Lewis Black), Fear (Bill Hader), and Disgust (Mindy Kaling). Riley’s mind also houses a subconscious (“that’s where all the troublemakers go,” we’re told), a dream-making studio (complete with snobbish actors), a series of “islands” that represent her values and hobbies, and a memory library: rows upon rows of miniature orbs, tinted blue or gold depending on the nature of the memory in question.

Related: How originality helped Pixar get its mojo back

When Riley’s homesickness and preteen angst cause her to act out, the islands in her mind (Family Island, Friendship Island) begin to crumble and memories that were once gold (i.e happy) begin to turn blue. This is partially on account of Sadness, who spends most of her time sleeping, whining morosely, and trying to take over the control panel of Riley’s mind to no avail. She is thwarted repeatedly by Joy, an exceedingly plucky micro manager, who wants Sadness nowhere near the forefront of Riley’s consciousness. And this is where Inside Out is revolutionary. The relationship that carries the film and cements Riley’s well-being isn’t one between the protagonist and her sister, or her prince. It’s between two seemingly irreconcilable emotions inside her own head: Sadness and Joy. Unlike battling dragons or befriending the monster under your bed, Riley’s struggle—coming to terms with change—is one every kid can relate to. And the film’s message, though seemingly unremarkable, is profoundly useful. Sometimes it’s okay to be sad; you won’t feel better until you let it all out. It’s Pixar’s rendition of Leonard Cohen’s Anthem: Forget your perfect offering, there is a crack in everything. That’s how the light gets in.

FILED UNDER: Disney Editor's Picks Inside out pixar