How Sarah Silverman broke her fingers on a treadmill, and got naked for Sarah Polley 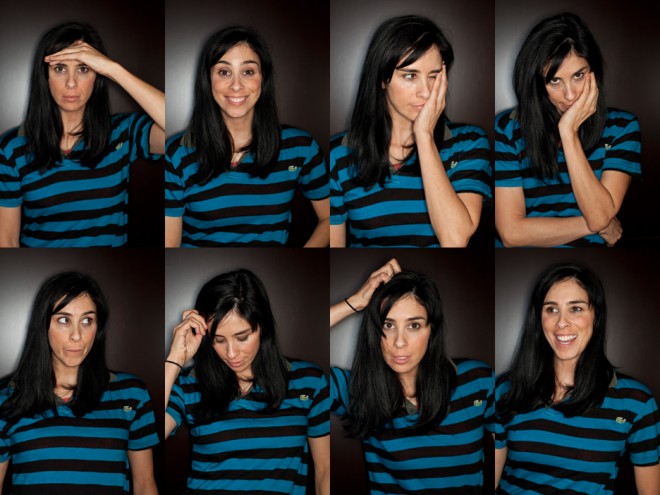 My left foot has been a preoccupation at TIFF, or more precisely my big toe, which I fractured on the eve of the festival in a guilty flurry of domesticity—yanking the green bin out to the garbage in the dark while forgetting about the jagged flagstone that sits on the lid to keep out raccoons. I’m not looking for sympathy here. Any journalist “doing” the festival talks about as a physical endurance test, a sleepless marathon of movies, interviews, parties and writing. It’s not a war, but we act like it is.

That notion of TIFF being a hardship assignment was put into sobering perspective when I ran into a couple of bored photographers heading off to shoot actors in hotel rooms: one was just back from Afghanistan, the other was going off to cover child soldiers in Africa. Still, I like to think my raccoon-related injury makes me a casualty of something. And wading into the Blackberry-blinded mobs at TIFF wearing sandals (shoes are too painful) does makes one paranoid. I try not to talk about the Toe any more—every second person you meet has a broken toe story. But assiduously avoiding contact, I stubbed it on someone’s luggage in a hotel lobby, two minutes before interviewing Sarah Silverman for her role in Sarah Polley’s Take This Waltz. I had to share my pain.

Silverman, who is 40 but looks like a teenager, didn’t have a toe story. But she held out her hands, which looked small and fragile, and pointed out where she had broken two of her fingers—on the treadmill. The treadmill? She mimed the movement of an over-zealous jogger, arms flying akimbo. “I hit them on the sides of the machine.”

I began our interview with a riddle: “What do Psycho and Take This Waltz have in common?”

The answer: “Everyone wants to talk about the shower scene.”

“I had fear and anxiety about doing it,” says Silverman. “But when Sarah asked me, I just said yes. I felt so lucky to being in her movie, I just trusted her. I thought, what have I got to lose? It’s a body. I want to at least seem to be as comfortable with my body as I’d like young girls to think I am. What, am I going to, like, worry about losing parts to Megan Fox? I’m 40. It seemed like the right thing to do.” As a director, she added, “Sarah really is the shining example of someone who has a very specific vision, knows exactly what she wants from you, and how to get it, all the while being warm and lovely.”

Silverman plays a recovered alcoholic in the film, and sister to Polley’s stolid husband, who is portrayed by Seth Rogen. For both her and the Canadian actor, it was a unusual foray onto dramatic turf. Silverman, however, doesn’t see it as a stretch. “Seth and I, we both approach comedy in a pretty real way,” she told me. “I have veered into the absurd Bugs Bunny character, but aside from that it’s pretty much saying the words real. The audience smells fear and they smell bullshit, and even if you’re saying made-up jokes there has to be an honesty that transcends. To translate that into something more dramatic feels more seamless than if a dramatic actor is doing comedy. A lot of times a dramatic actor will get in their head about putting comedy on it in a cringy way. If it’s not in your bones, it’s not going to go over well.” (I know exactly what she means, having seen Kristin Scott Thomas fly shamelessly over-the-top in Salmon Fishing in the Yemen, throwing the film’s tone askew with a caricature of a prime minister’s press secretary that’s not remotely credible.)

I asked Silverman if people expect her to be a laugh riot in every situation, 24/7 . . .  such as an interview.

“I can do joke answers,” she offered, implying that would be a bad idea. She was there to talk about the movie.

But she’s game to talk about jokes. I ask the comedienne about her Twitter feed, which is a stream of instant riffs—like Steve Martin, she tends to use tweets for absurdist pensées and orphaned one-liners.

“Some of my friends feel they’re wasting a joke [by tweeting it],” she said. “Me, I’ve always worked backwards. I’ll try a joke on Conan or the Tonight Show and see if it works. I like Twitter. I like being able to put something out there and see if it catches fire, and then see if it can be something more than 140 characters. Some of them become bits. Most are just in the moment of where I am and what I’m doing. I’ll print them out months later and see if there’s something there.”

Postscript: I’d also been hoping to interview Seth Rogen. But his U.S. publicist had pared down his schedule, so that wasn’t going to happen. But talking to Silverman, I ran into Rogen in the men’s room. We’d never met, but I did a long phone interview for him when he was promoting Superbad, so I felt I should introduce myself. With me leaving the urinals and him arriving, it was a funny, awkward moment, as he laughed his Seth Rogen laugh and we agreed not to shake hands.