I am serious, and don’t call me Shirley 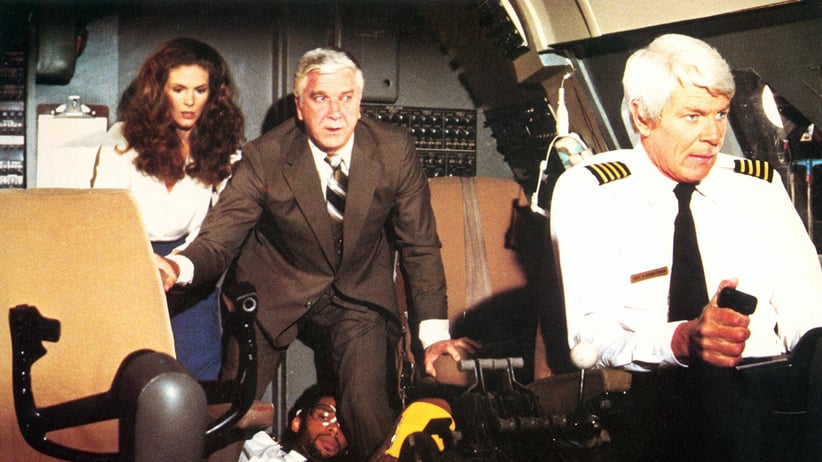 When critics list the most influential films in history, Gone with the Wind soars, Battleship Potemkin rides high, and Airplane! flies under the radar. But, as the densely plotted Thomas Pynchon noir adaptation Inherent Vice and the, well, dense Dumb and Dumber To—both indebted to the 34-year-old classic—hit theatres, it’s time to acknowledge how a whole fleet of films has been fuelled by the smartest stupid movie ever made.

The directorial debut of three friends from Milwaukee—Jim Abrahams and brothers Jerry and David Zucker, collectively “ZAZ”—is ostensibly a send-up of Zero Hour! (1957), in which a former war pilot is forced to fly a commercial plane after food poisoning wipes out the crew. While it also spoofs the disaster movies of the 1970s, its humour feels timeless. Seth MacFarlane paid homage to its cultural omnivorousness by recasting the film’s Saturday Night Fever-derived disco dance scene in Ted; the Farrelly Brothers, who were tutored in screenwriting by ZAZ, make liberal use of its cornball visual humour and reference the movie explicitly in Dumb and Dumber’s airport scene. Paul Thomas Anderson, whose work includes There Will Be Blood and The Master, adopted Airplane!’s trademark blink-and-you’ll-miss-them background gags for Inherent Vice. He has praised ZAZ for revealing to him that, in film, “you can get away with multiple things at the same time.”

Pace is Airplane!’s most obvious legacy. In their early years as a sketch-comedy troupe, ZAZ learned to keep audiences laughing nonstop; Airplane! applied this strategy to narrative film, piling on gags even as it moved the plot forward, and became the first MTV-generation comedy. On the phone from his office in L.A., Jerry Zucker recalls that ZAZ refused to dwell on their jokes out of respect for the audience: “We didn’t need to explain everything or point to anything.”

Another key tenet was to keep the acting dead serious, even as the humour went over the top. Airplane! pioneered the hiring of dramatic actors to deliver silly lines with gravitas. Zucker, who would go on to direct more dramatic hits, such as Ghost and First Knight, explains: “Playing it straight, to most actors, means using a deep voice or a heavy tone but winking. That’s deadly for our kind of satire. Robert Stack, at one point, said, ‘I get it: We’re the stooges.’” Leslie Nielsen, who plays Dr. Rumack, would make a second career out of such roles, most famously in ZAZ’s Naked Gun trilogy; a follow-up is in development starring The Hangover straight man Ed Helms.

But Airplane!’s bankable style means its substance is oft overlooked. The robotic behaviour of the men in charge (typified by Nielsen’s continually wishing the replacement pilot good luck, even after the plane has landed) points to an absurdity in American culture. The “land of the free” embraces paternalistic authority figures, such as Nielsen’s obtuse doctor, Stack’s violent, grumpy military captain, and Peter Graves’s pervy Captain Oveur, no matter how arbitrary their orders.

ZAZ, says Zucker, always felt like outsiders in Hollywood: From the start, they “didn’t like people who were pumped up because they had money or they were the head of something.” They skewered what they saw as an insular culture of entitlement, an aspect of Airplane! that seems relevant now. According to Zucker, in the films Airplane! was spoofing, such as the Airport series, “Everything was so heavy—life-and-death, and all that. Airplanes do crash, but it’s not like it happens very often, and I think we’re seeing the same with Ebola. Politicians are [saying, ‘U.S. President Barack] Obama hasn’t done enough, and we should close the border,’ and all this craziness.”

Airplane! picks up the anti-authoritarian gauntlet thrown down by Joseph Heller’s Catch-22, and finds a kindred spirit in Inherent Vice author Pynchon, whose musings on the death of 1960s idealism are, like Airplane!, shot through with references to the likes of Ethel Merman. These may seem like throwaway gags, but they suggest that having an eye for the ludicrous is essential for navigating contemporary society. The ZAZ team, says Zucker, has “always had a thing about self-importance.” Their antidote? Surely, you can’t be serious.