In conversation with Jane Fonda: 'I am so disappointed with your prime minister'

The multifaceted actress speaks about her political activism, the institution of marriage, a new version of '9 to 5,' and how the world has changed for women 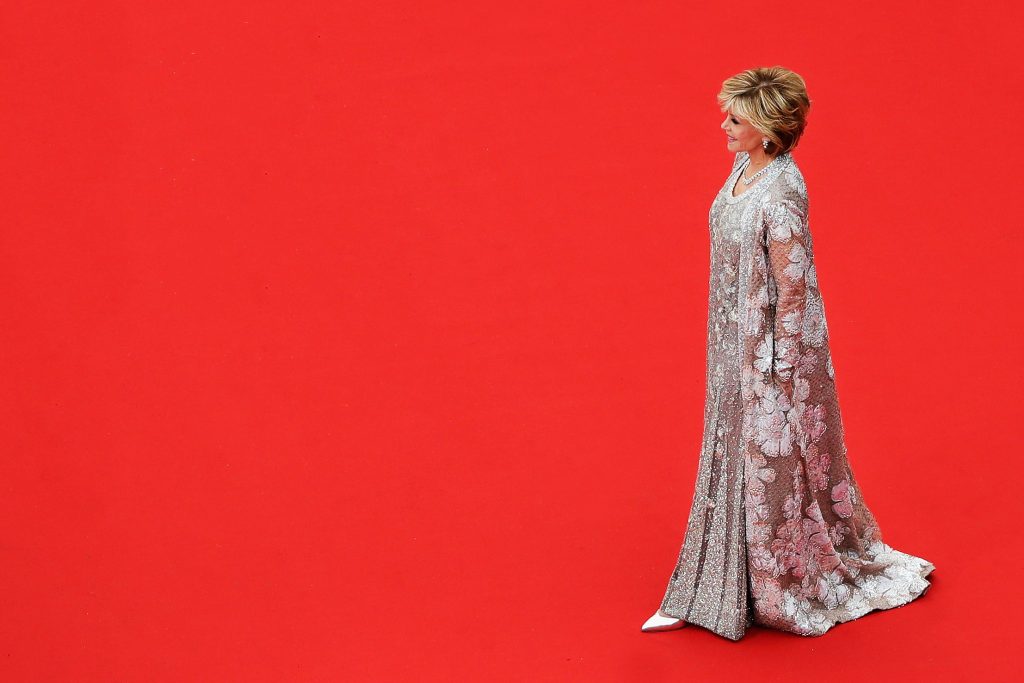 Jane Fonda attends the screening of “Blackkklansman” during the 71st annual Cannes Film Festival on May 14, 2018 in Cannes, France.

The first voice you hear in the documentary Jane Fonda in Five Acts—premiering Sept. 24 on HBO Canada—belongs to Richard Nixon. The former U.S. president is venting about Fonda’s efforts against the war in Vietnam. “I feel so sorry,” Nixon is heard saying, “for Henry Fonda.”

Henry, of course, was Jane Fonda’s all-American, movie-star father. Filmmaker Susan Lacy (American Masters) knew she had her opener. “I wanted a signal that this was not a film about a movie star. Jane is a great movie star, she’s a great actress—but that is not, I think, the heart of her story.”

While she reveals plenty in the documentary—including how only vodka got her through her opening nude scene in the 1968 film Barbarella—the fit and feisty Fonda, now aged “80-and-a-half” (she notes that only the very young or the very old make that distinction) still hints at stories left over as she sat for this Canada-exclusive one-on-one conversation with Maclean’s.

Q: As a political activist, what is your take on our prime minister, Justin Trudeau?

A: I am so disappointed with your prime minister. Don’t trust good-lookin’ liberals. I don’t believe a word he says anymore. He became the hero at the Paris climate summit and then he’s letting the Alberta tar sands pump across and down to Vancouver. Owh!

Q: Did you ever meet his father, Prime Minister Pierre Trudeau?

A: Yes, back in the early ’80s. I think maybe he was down here in Los Angeles with Barbara Streisand. I’m not sure. He was not married at the time, and he was around. And I met his wife (Margaret) too—she was (pause) also around.

Q: Early in your career the great director Elia Kazan asked you if you were ambitious. You said no; that answer cost you the lead in Splendor in the Grass. Would you have given the same answer today?

A: No, I would say, “Yes, I am ambitious.” The minute I said it I knew that I’d made a mistake. Not that I didn’t know if I was ambitious or not but I knew it was not what he wanted to hear. But it was an answer that came from cultural conditioning. Good girls aren’t ambitious.

Before that, when [the great acting coach Lee] Strasberg interviewed me about accepting me into his class, he thought I seemed extremely conventional and boring, except for my eyes. That was all due to my demeanour. How I presented was very much, “I’m a good girl. I’m the way my daddy would like me to be. No I’m not ambitious and I don’t get angry. No, I’m not all that smart either.”

Q: When we get to the section of the documentary where you create this fitness empire, you use this quote from Thomas Jefferson: “Revolution begins in the muscles.” What does that mean to you?

A: I know from personal experience that when you become strong physically, it changes your psyche and the way you present to the world. I know this from the letters I would get from women who were doing the workout. They would write that, “Today I could stand up to my boss, because when I was brushing my teeth I saw a muscle in my arm.” So I know that it’s true.

Q: You’ve called 1981’s On Golden Pond—the only film you ever made with your father Henry—the ultimate catharsis. Not many people get to make a film that would help them bond with a loved one. Did you know at the time that you were taking full advantage of that?

A: Yeah. I knew he was dying. We all did. We all worked for scale because we knew that it had to get done and I knew that I was the luckiest girl in the world to be able to give this as a gift to my father and to myself at the end of his life. And that it won him an Oscar! It was incredible.

Q: In act four of the new documentary, you talk about Ted Turner, or as you call him, “my favourite ex-husband.” You say in the documentary that when you first met: “He looked at me and I felt like I was being eaten.” What would he say about the way you were looking at him?

A: I just don’t think he would have noticed how I was looking at him. Guys don’t notice that kind of thing. He was too concerned about impressing me and knocking me off my feet, and he did.

Q: You’ve married and divorced some extraordinary people. You learned from them and, as you say in the documentary, you were never bored. But do you think marriage can last?

A: Oh yeah. I’m so grateful that I know many people who have been married for 50, 60, 70 years and it’s so beautiful. And it makes me sad because it was something I’ll never know. It wasn’t the hand I was dealt.

Those people, I think without exception, are people who were loved unconditionally by parents who loved each other unconditionally. They saw it being modelled, they didn’t need someone else to validate them, and they were loved! And so when the two people would come together in marriage it was two fully formed adults coming together, standing on their own two feet and joining forces. And it’s a beautiful thing.

Q: You’re going into a fifth season of your Netflix sitcom Grace and Frankie. Lily Tomlin, your co-star on that series and your longtime friend, was spilling a few secrets at a press tour a few years ago. Is it true you once went skinny dipping with Katharine Hepburn?

A: No! It was Greta Garbo. And Michael Jackson. Not at the same time, mind you—several generations in between. The first was in Cap Ferrat [in France], where my father had rented a summer house and Garbo came to visit, and she asked me if I wanted to go swimming. So we dove into the Mediterranean. Michael was when I was making On Golden Pond and he came and stayed with me.

Q: What’s it like playing off Tomlin in Grace and Frankie?

A: It’s such a gift to be working with this woman. We’re such polar opposites. She was loved unconditionally, and she’s been with her partner, Jane Wagner, for 46 years. When they first met at the Sherry Netherland hotel in New York, Lily took one look at her and fell head over heels and that was that. The love was that deep.

Q: This whole process of looking back—what’s the great value in that for you?

Q: What are you doing now that you might not have done had you not taken stock?

Q: Nearly 40 years after you made 9 to 5, women in the workforce are still facing problems of unequal pay and sexual harassment. Those have been contextualized today in more formalized movements such as #MeToo. What is your involvement in the new 9 to 5 and what do you hope it tackles in the new generation?

A: My involvement is as an executive producer and, together with Lily, working with the writers, talking with the writers. I’m sorry to say the situation is worse today, and I’ll tell you why. Back in the day, the company was called Consolidated, which it still is in the new version, but you worked for the company. You were hired by the company. If you had problems, you went to the company. Today, a lot of the workforce is hired by an outside company and subcontracted back to Consolidated. So if there’s a problem, where do you go? Who do you complain to? Who do you fight with?

Plus, with social media, the internet, the computers, all the things that we didn’t have then, you can be spied on very easily. Everything you say, everything you do, everything you write, every email you send. So it’s much worse. Although I do think probably sexual harassment will tend to drop because guys are scared.  Ha-ha.

Q: Are we going to see those changes reflected in the film in a specific way and other issues for women tackled as well?