In debt to Dumb and Dumber

After 20 years, an unlikely sequel launches in a comic universe it helped create 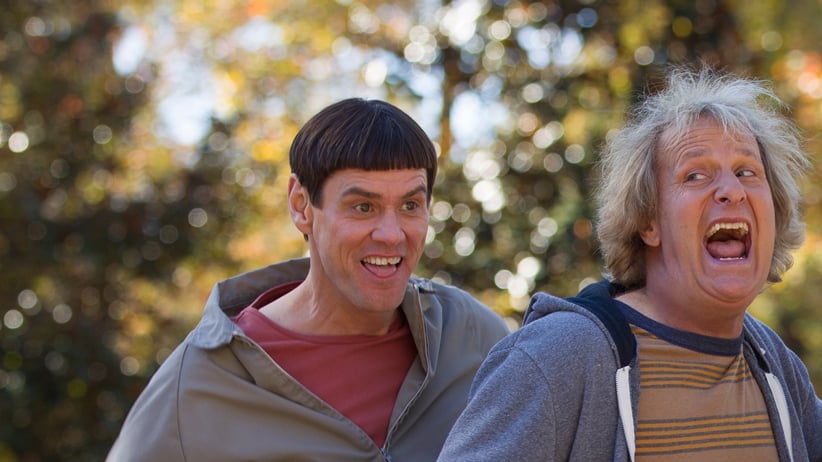 Of all the films of 1994, the one whose 20th anniversary is being celebrated with the most fanfare this year may not be Forrest Gump, or The Lion King, but a comedy about two idiots taking a cross-country drive while pursued by criminals. Back then, Dumb and Dumber was just another one of the string of comedies that suddenly turned Jim Carrey from a second-tier Canadian comic into a superstar. But, on Nov. 14, when Carrey and co-star Jeff Daniels reunite for a sequel, Dumb and Dumber To with the original writer-directors, Peter and Bobby Farrelly, they’ll be going into a world of movie comedy that has become a lot more like Dumb and Dumber than anyone expected.

Most movies of any kind wouldn’t even get a sequel 20 years later, but Dumb and Dumber, like Ghostbusters, is one of those comedies that is still alive in popular culture, even as Pulp Fiction fades more into a ’90s retro reference. Articles appear online with titles like “20 Dumb and Dumber quotes you should still be using in every conversation.” Memes from the movie have become so popular that former U.S. presidential candidate Mitt Romney has adopted one of them: Every time he is asked whether he will run again, he refers back to a scene in Dumb and Dumber, where Carrey is told by a woman there is a one-in-a-million chance they’ll together; Carrey then smiles and says, “So you’re telling me there’s a chance.”

And yet, at the time, the film’s goofy, Three Stooges-inspired style was considered a risk. Brad Krevoy, one of the producers of the original film and the sequel, says, “Many people thought sophisticated comedy was the way to go,” and the Farrelly brothers’ script was “a very traditional, lowbrow type of physical comedy . . . Everyone we brought the film around to said, ‘Are you kidding? This will never work in the marketplace.’ ”

But, once the movie became a hit, it turned the Farrellys’ old-fashioned comedy style into the Hollywood state of the art. They had never written or directed a film before, and Krevoy says, “They hadn’t been on any real movie sets,” and, to prepare them for the shooting, “we reached out to comedy directors who could mentor them.”

Soon enough, younger comedy directors were learning from them about making comedies for a primarily male, adolescent audience—the same people who go to see action blockbusters. This led to many other comedy stars who played overgrown adolescents, like Will Ferrell and Owen Wilson. And it brought teen-friendly gross-out humour into the mainstream. “Dumb and Dumber definitely upped the ante when it came to the “ick” factor, says Saul Austerlitz, author of Another Fine Mess:
A History of American Film Comedy. “The Farrellys are fundamentally adolescent filmmakers. I mean that in a good way.”

The most influential scene in Dumb and Dumber was one where Harry (Jeff Daniels) is drugged with laxatives by Carrey’s character. “Physical comedy having to do with bodily fluids was novel for the time,” Krevoy says. “People said, ‘You can’t get away with that.’ ” But the scene became so popular that it set the style for outrageous scenes in many comedies to come, like the vomiting scene in Bridesmaids.

But the Farrellys also showed how you could combine slapstick with corny emotion in the portrayal of male friendship. “These films work, because the Farrellys are fundamentally sentimentalists,” Austerlitz explains. “They want to get to that happy ending. Much of contemporary comedy is also looking for that perfect blend of the acerbic and the sweet.” The films of Judd Apatow, sentimental comedies about men who never grew up, may be indebted to the world of Dumb and Dumber, even if Seth Rogen’s characters are slightly smarter than Carrey’s.

Although Carrey went on to make more thoughtful comedies, such as Eternal Sunshine of the Spotless Mind, he appears to have a special place in his heart for his purest, silliest comedy. That may be why Peter Farrelly told the Los Angeles Times that the sequel is being made, in part, because “Jim called me out of the blue and said, ‘I want to do that kind of movie.’ ” So does everyone, it seems.