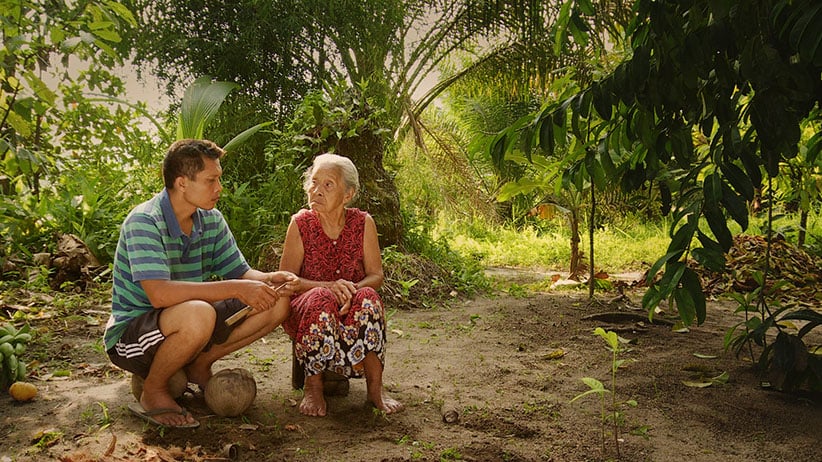 Joshua Oppenheimer’s last film, the Oscar-nominated 2012 documentary The Act of Killing, confronted perpetrators of the 1965 Indonesian genocide about their deeds, and presented their gleeful re-enactments to the world. The killers, who murdered an estimated half a million Indonesians accused of communism in the wake of a military coup, gloated about the death toll and posed for pictures at the kill sites, sometimes with props, as though at a tourist attraction. Yet, when the confronter is not a Harvard-educated filmmaker, but a victim’s brother, the reactions change, forming Oppenheimer’s new film, The Look of Silence.

Months after finishing The Act of Killing, Oppenheimer showed it to a man in North Sumatra named Adi, whose brother was dismembered by the very killers in the film. Living alongside the men, Adi had watched his mother pray quietly for years that they suffer. But he and his family were hushed by fear of the military, which, even today, holds signiﬁcant power. Last year, the president acknowledged the genocide as a crime against humanity, but said Indonesia must reconcile in its own time. Helped by the film crew, Adi attempts to galvanize that conversation.

Adi and Oppenheimer share a commendable goal: truth and reconciliation. But the journey can be discomforting. Oppenheimer tells the killers he has come for follow-up conversations, bringing Adi, an optometrist, to check their eyes for free. As seniors with vision concerns, they welcome Adi, and the familiar camera crew, into their homes. Then, as he checks their eyes using a goggle-like contraption, Adi calls the men out for killing his brother, Ramli. Some demand the crew stop filming; others insist Ramli was killed in a different region by other men. All are left sweating behind the ocular device.

Adi also confronts the killers’ children, who are wilfully, or blissfully, blind. When two siblings deny knowing anything, Oppenheimer shows them footage of their father bragging about his kills. “I’m pushing them to acknowledge that they’re lying,” he told Maclean’s, “not because I’m trying to humiliate or punish them, but because I’m trying to get past this absurd denial.” At his prompting, one man gloriﬁes his deeds before his daughter, describing the sweet and salty taste of blood—perpetrators ritually drank their victims’ blood—or the porous texture of an amputated breast. Her face collapses.

They press survivors to remember, too. Adi leads one reluctant man to the site of Ramli’s murder, and then to the river, where bodies were dumped. That’s risky, as, even after The Act of Killing’s release, speaking about the genocide could endanger lives. Such is the military’s power that Oppenheimer, upon arriving in Indonesia in 2001, felt he’d “wandered into Germany 40 years after the Holocaust, only to ﬁnd the Nazis still in power.” While filming The Look of Silence, he hid his camera any time a vehicle drove by, and almost half the people who helped with the film are credited as Anonymous.

From the painful prodding comes potential for change. Indonesians have watched The Look of Silence in thousands of public screenings and online, and the vice-president has vowed to apologize in a national address. Oppenheimer could have added more politics—the New York Times called the coup a “gleam of light in Asia”—but he wanted to make an artful film. Even transition shots dwell on absorbing images: a man trembling in a headstand, a market almost abandoned at nighttime, the cocked-neck stare of a killer trying on glasses, determining if they will help him see. Oppenheimer says he would not make a film in a current war zone. “I actually think of myself as kind of a coward,” he said. “My ﬁlms are not about violence, but its terrible legacy, and I make them to be poetic.”

There is only one apology in the film—from the daughter who hears her father describe his taste for blood. She goes silent and eventually hugs Adi. Many filmmakers would have ended on that scene. Instead, Oppenheimer shows the siblings in denial, who kick Adi and the crew out of the house. The final conversation in the film, it’s as tense and hostile as it should be.