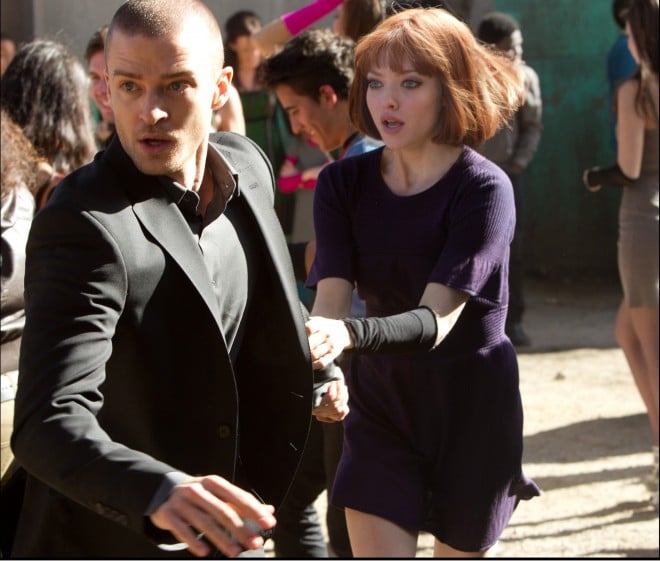 Justin Timberlake and Amanda Seyfried in 'In Time'

Gotta love the zeitgeist. New Zealand-born filmmaker  Andrew Niccol, who scripted The Truman Show and wrote and directed Gattica, crafts anti-totalitarian sci-fi thrillers with the high-concept flair of a TV commercial director, which is what he was before he made features . But when Niccol was shooting In Time, there’s no way he could have known that it would be so timely—a picture-perfect pamphlet for an Occupy Wall Street movement that hadn’t happened yet. And how sci-fi is that?

This meta-Marxist allegory about human capital takes place in an Orwellian future where time is literally money. For everyone, aging mysteriously stops at 25, freezing youth and beauty in a vampire-like stasis. From that moment on, people live only for as many years, months, days or minutes that they can earn. Time is the universal currency. The 99% scrape to stay alive for another week or two; the 1% have centuries to burn. Your net worth is written on your wrist, as a fluorescent clock that spins numbers on skin like a digital tattoo. It’s a kind of bar-code scanner. Everything you buy is priced in increments of time, from pay phones to sports cars. How does it all work? Don’t ask. This is the kind sleek sci-fi flick that doesn’t waste time explaining its premise. You just have to run with it. And there’s a lot of running. Not just because it’s an action movie, but because the characters are, well, racing against time. If your clock runs down to zero, you die, with a spastic electric jolt. It’s called “timing out.” No one can afford to be in debt. And there’s plenty of crime afoot, because you can steal someone’s time in an arm-wrestling transfer, or give it away. Needless to say, there are more word plays on time than sexual double entendres in a Bond movie. When a gangster tells his thugs to “clean their clocks,” it’s not just a metaphor.

The story is an outlaw romance between Will (Justin Timberlake), a factory worker who never has more than a day to spare, and Sylvia (Amanda Seyfried) an heiress who becomes his hostage. A wealthy stranger bored with his endless youth gives Will his entire fortune just before committing suicide. And our hero promptly decides to use his windfall to bring down the system and redistribute the world’s wealth. He buys his way across borders into the wealthiest time zone (poverty and affluence is strictly ghettoized), where he challenges a super-tycoon (Vincent Kartheiser) in a high-stakes card game at a casino. Just like 007, tux included. But when a time-keeping cop (Cillian Murphy) charges Will with murdering his benefactor, Will goes on the run, grabbing the tycoon’s daughter as his hostage.

The film’s basic concept is ingenious. This is a thriller where everyone wears a personal doomsday clock, a ticking time bomb on the wrist. But that one nifty premise is like a digital gyroscope on a boatload of salvaged tropes. Timberlake’s romantic outlaw is a superhero in a live-action cartoon, a reckless time bandit who seems unsure if he’s James Bond, Robin Hood or  Clyde Barrow. His opponent is a pulp stereotype, the hard-boiled cop driven by a vendetta against the hero’s father. One minute we’re in Breathless, on a nihilist road to hell, in the next we’re saving the world from capitalism, with bald polemics against the economics of controlled scarcity poking through the dialogue. (“No one should be immortal if even one person has to die.”) The tycoon villain is not an evil genius trying to take over the world; he already owns it. Time is totally on his side: he belongs to the .0000000001%.

And the stars? Timberlake, who’s in danger these days of being typecast as an unctuous smoothie, finally gets to show some grit. Though his acting still lacks depth—there’s never more to his performance than meets the eye—he makes a credible tough guy from the wrong side of the tracks. But it’s Seyfried who gives the movie its juice. As the hostage-cum-accomplice who develops a savage taste for firearms, she’s Kick-Ass meets Patty Hearst in high heels. Almost unrecognizable in a blunt-cut bob, she holds her performance within a sharply minimalist range of expression, playing the character like a stylized femme fatale in a graphic novel.

In Time is a bit too in love with its own formula. (You can imagine Niccol pitching the script—”everyone in the movie is 25 and good-looking!”) Unlike Bonne and Clyde or Thelma & Louise, this is an escapist outlaw romance that’s afraid to go all the way. These days everyone wants to play it safe, and leave room for a sequel or a franchise. But even if the movie’s schematic perfection holds us at a cool distance, In Time shows us . . . a good time. It’s an energetic, entertaining ride. As various body clocks keep tumbling down to the brink of zero in a Groundhog Day spin cycle of near-death experiences, everyone in the movie is forever checking their watches. But even with the dutiful time-outs to denounce Darwinian monetary policy, I never felt the need to check mine.