Interstellar: A cosmic love letter to the human spirit 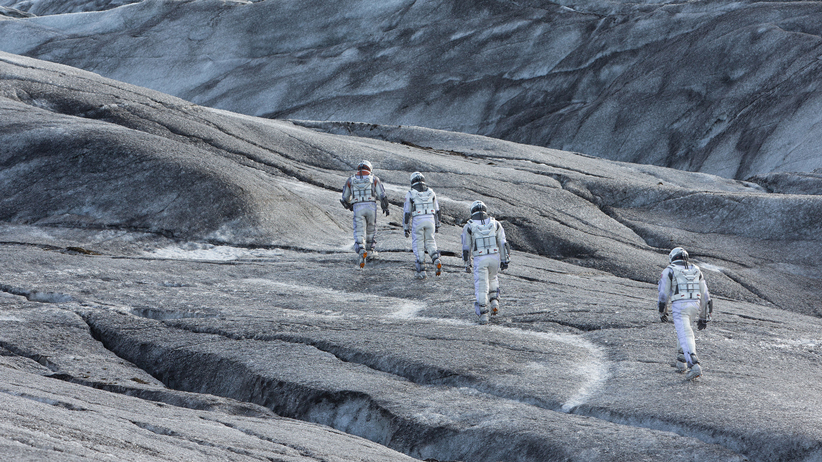 In 1986, Canada’s first astronaut described the experience of viewing our planet from outer space. “It’s very, very beautiful,” said Capt. Marc Garneau. “There are wars going on, there’s pollution down there. But this is not visible from up above . . . This is just one small planet lost in the middle of space.” Garneau was describing the “overview effect,”a term coined by author Frank White to describe the fundamental cognitive shift that overtakes astronauts when they view Earth from orbit. As White describes it, the experience is more than a cheery photo op. It facilitates a radical shift in awareness.

The overview effect has shaped the psychology of space sciences and validated the idea that space travel is not only an inherent good, but a biological imperative—an idea that endures in our Hadfieldian moment of upbeat pop astronomy. As Matthew McConaughey’s space conquistador puts it in Christopher Nolan’s Interstellar, “We’re not meant to save the world. We’re meant to leave it.”

Speaking over the phone from L.A., Nolan, the film’s director and co-writer, offers his own take on the overview effect. “You look up at the night sky and see an entire universe out there,” he says, “and the idea that we aren’t going to go and see what’s out there is utterly irrational.”

Nolan’s cinema is a cinema of cold rationality, a cinema of cleverness. From the con man staying two steps ahead of his understudy in Nolan’s 1998 debut, Following, to the one-upping magicians of The Prestige, to the dream-within-a-dream mental heists of Inception, Nolan’s movies are places where fortune favours the crafty. When his biggest success, 2008’s hit The Dark Knight, saw Christian Bale’s Batman exploit the civil liberties of the Gothamites he’s vowed to protect, the message was clear: Means always justify the ends of a good old-fashioned outfoxing.

In Interstellar, Nolan pushes this theme to its limits. Set in a future where Earth is decimated by agricultural blight, populations are devastated and history is rewritten to claim the moon landing as a Cold War fiction, the ﬁlm casts McConaughey as an astronaut turned farmer turned astronaut again leading a mission to save humanity by travelling through a wormhole in hopes of colonizing faraway planets. It’s a film about humankind being cornered by its own destructiveness and excess, then forced to outsmart itself. For Nolan, this one-upmanship is its own evolutionary law. “That to me is the truth of human beings,” he says. “[We] are remarkably adaptable, and brilliant in a crisis, and brilliant at dealing with harsh realities.”

This optimism is consistent with today’s pop-science positivity, but when Michael Caine’s aging astrophysicist explains NASA’s covert operation by noting, “Public opinion wouldn’t allow spending on space travel when people can’t put food on the table,” it’s hard not to feel a twinge of sympathy with the starving masses. (In the words of comic David Cross, “We’re going to put a man on the moon? Let’s put a man in an apartment.”) Instead, McConaughey laments, “It’s like we’ve forgotten who we are: explorers, pioneers—not caretakers.” That’s just the sort of attitude that led to the pre-apocalyptic global dust bowl Interstellar presents in its first act.

Interstellar’s cinematic articulation of the overview effect puts it at odds with one of the genre’s touchstones, Stanley Kubrick’s 2001: A Space Odyssey. “We don’t live in a world where 2001 doesn’t exist,” says Nolan. “I was certainly daunted entering the arena of that masterpiece.” While Kubrick and Nolan draw comparisons, Kubrick was slyly ambiguous, even ambivalent, about technology: was it the product of our resilience? Or our thirst for conquest? Was that space baby smiling or sinisterly smirking at Earth in 2001’s ﬁnale? Nolan’s movie seems to solve a puzzle Kubrick laid out. It also floats some fuzzy cosmic ideas. As Anne Hathaway’s astronaut puts it, in what reads like a dorky valentine, “Love is the one thing we’re capable of perceiving that transcends the dimensions of time and space.” More than a pricey ad for NASA, Interstellar feels like Nolan’s love letter to the human spirit. Sometimes, the glass of Tang is more than half full. Sometimes it’s positively overflowing.