Today the vampires came to feast on Cannes. I’m not just talking about  Tom Hiddleston and Tilda Swinton, who star as an ultra-cool undead couple named Adam and Eve in Only Lovers Left Alive, by Jim Jarmusch. (More on that in moment.) There was also the incorrigible Roman Polanski, the eternal enfant terrible, who showed that his taste for cruelty remains undiminished.

Polanski was in Cannes for today’s premiere of Venus in Fur, the last of the festival’s 20 competition entries. A French-language adaptation of the Tony-winning play by David Ives, it unfolds as a comedy of domination and submission between an esteemed director/playwright (Mathieu Amalric) and the unknown but audacious actress (Emmaneulle Seigner) who shows up to audition for him. The film is a bottomless pit of life-art parallels, which became acutely apparent as Polanski performed for the media. Asked if he dominates his actors, he replied, perhaps only half-facetiously: “I dominate them, slap them sometimes when I can. They never complain.”

The director lived up to his image as a bullying provocateur throughout the press conference, where he shared the stage with his film’s two-member cast—Mathieu Amalaric, who looks remarkably like a young Polanski, and his wife, Emmanuelle Seigner. When Seigner struggled to answer a question about the challenges of  her occupation, she looked to her husband for guidance only to receive a rude put-down. “They’ll think you’re a dumb blond,” he said. When she finally offered an opinion—”it can be a wonderful profession, but it can be humiliating,” it had fresh resonance. 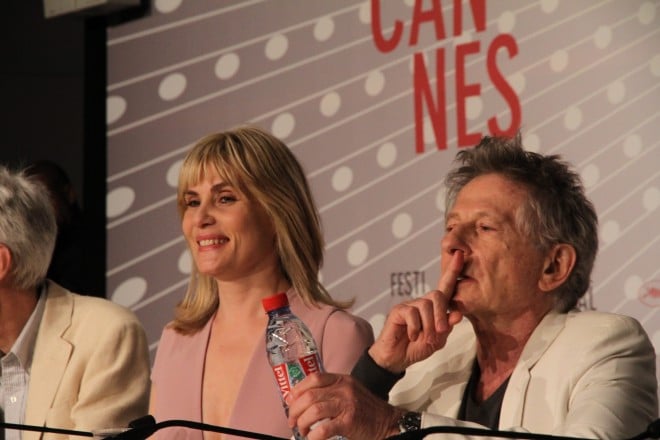 At one point, after fielding all the questions, Polanski urged the journalists to take an interest in his collaborators with him on the stage, who included producers, the composer, the cinematographer—and playwright David Ives. But almost every time anyone else did get a chance to talk, he would  interrupt. When a reporter asked the actors if they found it valuable to return to the source material of a film adaptation, the director answered for them. “The source is without meaning when you are on the set,” he said. Then, as if the play’s author was not sitting a few feet away, he went on to say he gave it to his wife before she read the screenplay, stressing that “she wasn’t very enthusiastic about the play.”

Unfolding in real time between just two characters in an empty Paris theatre, Venus in Fur adapts a play about a play that adapt a novel—the scandalous 1870 book by Leopold von Sacher-Masoch, whose name gave us “sado-masochism.” Polanski said he found the Ives’ “satire on sexism very seductive: the macho element of [the playwright’s] character is torn to pieces—those who know me know I’m not like that.” But while he has made a movie about a woman reducing an alpha man to submission, at the press conference, Polanski’s behaved like a control freak.

Also, two days after an 87-year-old Jerry Lewis brought down the glass ceiling  on female comics (“I cannot sit and watch a lady diminish her qualities to the lowest common denominator”), Polanski offered an old-school sermon on gender politics. “It’s a pity that now offering flowers to a lady becomes indecent,” said the director. “I think that trying to level the genders is purely idiotic. The pill has changed greatly the woman of our time, masculinizing her. That chases away the romance from our lives, and that’s a great pity.”

Well, one woman who wouldn’t take that crap lying down is Tilda Swinton, who virtually merged genders with David Bowie in a video for his latest album, The Next Day. In Last Lovers Left Alive, she and Hiddleston play a loving vampire couple who have been together for centuries. Adam is an underground rock star, a vampire allergic to the sunlight and the limelight. He has a beloved collection of vintage guitars, records in seclusion on a reel-to-reel deck and doesn’t want his  music to see the light of day. He’s a depressive who’s flirting with suicide, via of a wooden bullet. And he gets more depressed when his parasitical sister (Mia Wasikowska) shows up to sleep over and raid his stash of blood.

These vampires don’t go out and hunt for prey. They feed on a drug-like horde of contraband from a medical lab. As a treat they lick blood popsicles. They are vampire junkies, luxuriating in world-weary decadence, and the film proceeds at languid pace in a kind of opiated ether, enlivened by sardonic one-liners about science and culture. It’s a distillate of everything Jarmusch has done. Swinton and Hiddleston make an adorable couple.

Jarmusch, who said it took seven years to raise the film’s $7 million budget, admitted he hasn’t seen any of the current commercial vampire movies, such as the Twilight series. When I asked Swinton why we have become so fascinated with vampires, she said, “I suppose it’s because they live these long, long, potentially endless lives. We all so terrified of thinking about morality that we’d rather think about being immortal. And there’s something about the way they live in the wainscoting of life. They’re in the backwater. One of the things that I like in this film is the idea of invisible lives. Invisible work.”

“Are they they the ultimate antidote to celebrity?” I asked?

“I wouldn’t know what that is,” she said.

Last Lovers Left Alive is, among other things, a wistful romance for an analog world, from the opening sequence of a spinning vinyl 45 to Adam’s  collection of vintage guitars. But Jarmusch is no Luddite. When a journalist asked him if he liked YouTube, he said: “I love YouTube. I love the idea that you can watch a performance from the 1950s of Merle Haggard, then a lecture on mycology and mushroom identification by John Cage, then a clip of the Steve Allen TV show with young Frank Zappa playing a bicycle as a musical instrument, and then watch how a flying squirrel moves through space.”