It's time to break up with the romantic comedy

'Love, Actually' is a Christmas institution. But Shannon Proudfoot unloads on the lies that it, like so many romcoms, feed us 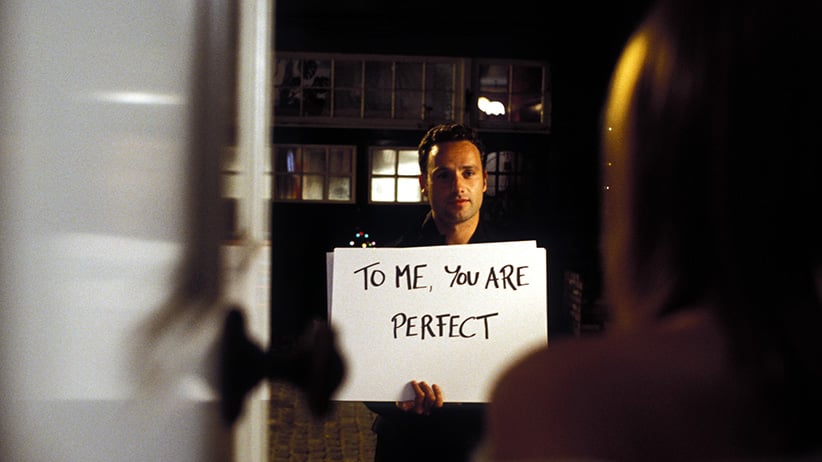 A still from the movie, Love Actually, 2003. (Universal/Everett Collection)

I hate romantic comedies and basically never watch them. Which either makes me the worst or best person to opine on whatever is wrong with Love, Actually (which I have never seen, but more on that later).

I never liked Friends and I think I’ve watched a grand total of two episodes of Sex and the City, which makes me some sort of colossal demographic failure for my age and gender. One of the SATC episodes I watched was the one where Carrie moves to Paris with a plainly emotionally abusive asshat who is ostentatiously rich enough to give her a necklace containing a diamond so large it has a hole drilled through it for the chain, before he crushes her heart. I retained no other details of the episode beyond that and an improbably perfect view of the Eiffel Tower through a hotel suite window. I hate rom-coms, but I like shiny things, so that’s what stuck with me.

None of which is to say I am too good—too high-minded or condescending—for rom-coms. Not even close. I possess a deep and almost entirely non-ironic love of reality TV—the more vapid the better, with vintage America’s Next Top Model and Bachelor(ette) episodes at the top of the heap. I loved the Canadian version of the franchise because the editing was demonstrably more cruel and tawdry than on the original. I am guilty of an indefensible, nearly hypnotic enjoyment of Journey songs (a not-unrelated fact: I grew up in northern Ontario). When I want to unplug my brain, I gobble up pages and pages of the very worst celebrity tabloid magazines. People and Us Weekly are too classy for this purpose; Life & Style is the way to go. The reason I feel white-hot resentment for the Kardashian and Duggar clans is because their hideous, cynical, clawing ubiquity has colonized the trash-news outlets I hold dear, like too many rats swarming around the dumpster at your favourite taco outlet and forcing you to think about things you’d really rather not be while happily stuffing your pie-hole.

All of this hit the collective pop-cultural landscape this weekend when Saturday Night Live—which, holy cow, has had one hell of a run this fall, fuelled in large part by the incandescent greatness of Kate McKinnon and the fluorescent awfulness of Donald Trump—riffed on the most infamous scene from the movie, plugging in Hillary Clinton. This got people on Twitter talking about Love, Actually and whether it does or does not suck. Andrew Coyne had fun batting around a particularly strident and humourless (though not incorrect) take on the movie, as his evidence of the tyranny of the extreme left.

Here is what I have somehow managed to absorb from the ether about Love, Actually: Hugh Grant plays the British Prime Minister, and I assume also some sort of humanoid golden-retriever puppy in a V-neck sweater, because: Hugh Grant. He starts an international diplomatic incident over a lady he likes, for reasons that are unclear to me. There’s a kid in the movie; I don’t know who he belongs to or how he fits into 17 plot-lines, but he is definitely adorable and unrealistically precocious. And there’s a crescendo scene in which a dude shows up on Christmas Eve at the doorstep of a woman who has since moved onto someone else, and he uses cue cards to surreptitiously try to win her back, while her current man-friend waits obliviously in the other room. (Okay, I just looked up the real context here and it turns out the dude at the door is the mopey, interloping best friend of the guy on the couch, who is the husband of his object of desire. So, yeah, that’s actually a lot creepier and more weaselly than I even assumed.)

I guess depending on your perspective, this scene is either winsome, romantic and aching, or it’s a day-late-and-a-dollar-short petulant gas-lighting nightmare. Tomato tomahto! Which is where we arrive at the central problem with rom-coms.

The premise on which virtually every rom-com rests—because plots need conflict—is that you must “fight” for your love through a long, torturous series of obstacles, ludicrously stupid misunderstandings that would be non-issues if, for the love of God, everyone just put on their big-boy and -girl pants and had a conversation, and temporary—though crushing—heartbreaks and estrangements. Only once you have weathered all those horrific experiences is your love proven to be “real” and are you permitted to be happy together for one minute and 47 seconds before the final credits roll.

Think about what you would say to a friend who unspooled a story like that to you. “Well, he accidentally proposed to a potted palm that he mistook for me, but it wasn’t his fault, because I was wearing a kicky flower-print pashmina when first he spied me at that flea market in Austin. And then after that, he accidentally slept with my boss right on my desk while I was working toward a big deadline. But you know, he’d had a really tough day and I know he feels so torn up about it now, so I get it. Besides, I know he’s the one for me because that toothless, gnarled crone who foretold my future in an alleyway in exchange for the umbrella I offered her out of the goodness of my Snow White heart during that rainstorm told me he was the one I was meant to be with!” If someone you cared about told you a wackadoo story like that, you would tell them to take several seats, possibly while administering a medicinal slap of sanity with a leather glove you bought just for the occasion.

But the thing is, we all have those friends, and we have all been those friends. And you know why? Because over and over, with a powerful ubiquity that’s like sickly wallpaper you don’t even notice anymore, rom-coms have taught us that the more painful and convoluted a relationship is, the more desirable and worthwhile it is, if only you have faith and keep fighting.

In reality, if someone you have giggly feelings over runs hot and cold or leaves you hanging multiple times and weeping into a bottle of wine/melting pint of ice cream/your Xbox, they suck and you should move on, not pursue them relentlessly until there’s a tinkly minor-key piano flourish at the departures gate of the damn airport. If there is one thing I would like to teach my kid about relationships—whether romantic or friendship—it’s that if someone makes you feel like crap, that’s not a red cape daring you to charge ever harder toward certain bliss at the end; it’s a cue for you to exit stage left and not look back as you go.

You know what’s truly hot and romantic? When you meet someone you dig and one of you says to the other, straight-up: “I think you’re cool. We should hang out some more because it would be fun.” And then you keep returning each other’s calls and texts instead of waiting on some deranged game of chess, and you introduce each other to your friends and family after an appropriate and non-psychotic interval of time, and then you shack up or get engaged or whatever is your thing, and pretty soon, you’re sitting around in your pyjamas together on Friday night eating takeout food that is very bad for you. That is romance, and that is happiness.

Of course, that story would result in an entire genre of movies that are eight minutes long and too boring to live. But still: rom-coms suck. They warp our sense of what’s good and sane and fun and healthy and sexy. You shouldn’t watch them, whether or not someone shows up with cue cards and sad eyes at the end.